The club has taken on a role of postseason spoiler late in its inaugural campaign. 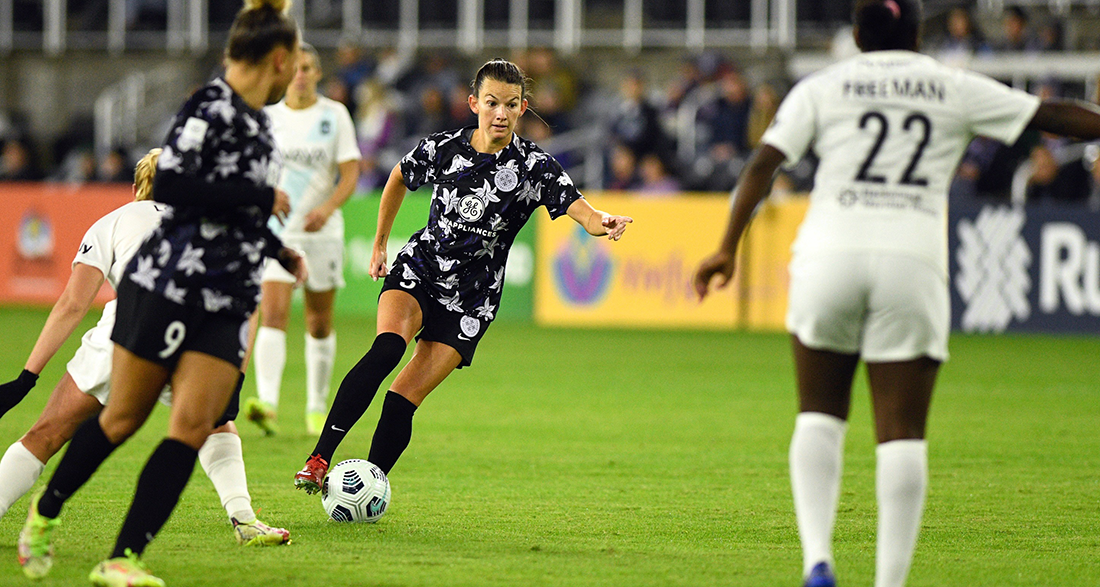 Racing Louisville FC has since been eliminated from contention to make the NWSL playoffs, but the ladies in lavender have turned into a bit of a postseason spoiler.

A game after eliminating the Orlando Pride with a win, Racing played NJ/NY Gotham FC to a 1-1 draw Thursday night in its home finale, delaying Gotham’s push to clinch a playoff spot.

Louisville’s Cece Kizer scored her sixth goal across all competitions to equalize after a magic moment from the retiring U.S. legend Carli Lloyd spotted the visitors an early lead.

The result moved Racing to 5-12-6 with one game to go —a quick turnaround to a rematch Sunday with Gotham at Red Bull Arena in Harrison, N.J. The game will kick off at 3 p.m. on CBS Sports Network.

“I thought it was a great way to end the season — well, end of our home fixtures,” said interim coach Mario Sanchez. “(I’m) extremely proud of the team. I think what people are starting to see is the character. Week in and week out I’ve continued to talk about the character of this team, and you know the last two games I think have exemplified what they’re about as human beings.

“To play teams that are fighting for the playoffs — to go a goal down and come back, it speaks volumes about them as people, about our players, about our culture that is being developed. Extremely proud of them and looking forward to Sunday to go at it again.”

Racing made this a third draw against Gotham in as many meetings this year after the clubs played a scoreless game in the preseason Challenge Cup and to a 1-1 result on Aug. 15 in New Jersey.

Despite an evenly played contest, Gotham maximized on some individual brilliance from Lloyd to move ahead in just the seventh minute.

A dribbling Lloyd — two days removed from her U.S. Women’s National Team sendoff — made a pair of defenders miss before laying off to Ifeoma Onumonu at the face of goal. Racing goalkeeper Katie Lund saved an attempt before Onumonu finished a rebounding try.

“I’m honestly honored to be sharing the field with Carli,” said Racing forward Katie McClure. “She’s an amazing player. Just watching the game, the last U.S. national team game, I kind of got a little teary eyed because I was sad for her, but she’s had a great, great career.

“Honestly proud that I stepped on the field with her, competed with her, and I think our team is too. It’s a great tie and I think that we go on Sunday and try to look for the win.”

Racing matched on a 52nd-minute counter attack, with Katie McClure feeding Kizer to register her first professional assist a game after scoring her first pro goal in the Orlando win.

“I think it is a testament to our resilience,” Kizer said. “I think that is something that a lot of us have talked about in the locker room, and that we want to have that identity of being a resilient team and you come into Louisville here and it’s a tough place to play. It’s not ideal to concede early, but I think for all of us it’s: They get one and we can put one right back.

“We know that we can counter quickly and get balls in the back of the net, and so I think that we need to continue that mindset into the Sunday game and into the next season.”

Gotham had the majority of chances after Racing knotted the score, though Louisville arguably had the better look for a late game winner. Into second half stoppage time, forward Cheyna Matthews shrugged off a defender in the box and had her ensuing shot saved.

Gotham tried 19 shots to Racing’s nine, and 16 of those attempts came from inside the box. Lund saved six shots, with Louisville’s defense stepping up to block seven others.

Gotham will play for its postseason Sunday, but there’s still something at stake for Racing. The club has already tallied more points this season — 21 — than prior NWSL expansion teams. The ladies in lavender can also make it more points per game in their inaugural campaign than the 2016 Orlando Pride (0.95) and 2014 Houston Dash (0.75) with a victory Sunday.