The sides paused play in the sixth minute as a show of solidarity across the NWSL. 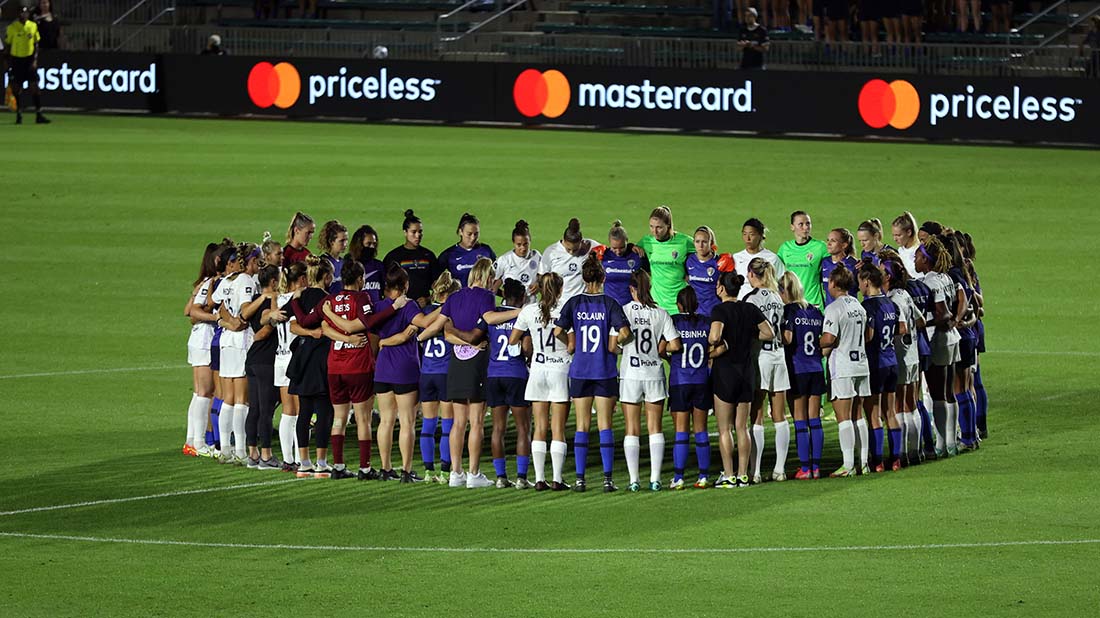 A first half barrage by the host North Carolina Courage overshadowed a moment of brilliance Wednesday from forward Savannah McCaskill in a 3-1 Racing Louisville FC defeat.

But that was hardly the focal point of an evening at Sahlen’s Stadium at WakeMed Park.

Racing kicked off as the NWSL returned to play following a weekend pause in the wake of The Athletic’s reporting on allegations of impropriety against Paul Riley, who was fired by the Courage.

“Enough is enough,” said Racing goalkeeper Michelle Betos. “It’s been a hard week for everyone, but this is an accumulation of years. As a league, we’ve decided we need to stand together.”

In the sixth minute — symbolic of the years it took Riley’s actions to come to light — both teams gathered at the center circle and stood in solidarity. Players also declined to discus soccer in their postgame conversations with media, preferring to keep the conversation on creating safer playing environments in the NWSL.

Speaking of her own club — which terminated former coach Christy Holly’s contract for cause on Aug. 31 — McCaskill said, “We were taken into account. (Leadership) wanted to protect us from the get go, and everything that they’ve done since then is to protect us to make sure we have a safe working environment. Anything we need, we’re given.

“…We’ve felt that from upper management since Day 1, really. They’ve provided us with a platform to thrive and given us anything that we could possibly need to perform from a facilities standpoint, nutrition — anything you could ever much think of, we pretty much have it at Racing. We have full support in the club.”

On the pitch, before the early break Racing claimed the game’s first chance when a Lauren Milliet cross found Cheyna Matthews in the box, though the shot flew wide. The Courage took control from there, netting shots in the 14th minute (Lynn Williams), 19th minute (Amy Rodriguez) and 30th minute (Debinha).

Amid that flurry, Racing did manage to pull one back in the 24th minute when Erin Simon recovered possession in North Carolina’s half and found McCaskill just outside the box. The forward sent a soaring shot from distance in to register her second goal of the season.

Life was otherwise difficult for Racing goalkeeper Katie Lund in her NWSL debut. The Women’s Cup hero — she both scored and stopped game-winning penalties in August to help the club win its first trophy — stepped up to number five saves in her first pro start.

In all the NC Courage out-shot Racing, 24-5, and out-passed the visitors, 599-275, in another dominant showing during this series. The Courage won previous meetings with Louisville in shutout fashion May 28 and June 23.

“I’m really proud of the team,” said interim head coach Mario Sanchez. “Obviously North Carolina’s a tremendous team — tremendous talents. I thought we made it interesting for them. I thought we caused them some troubles. I can’t say enough how happy I am for Katie Lund — her first professional start. I thought she has a really, really good game, so I’m tremendously happy for her.

“Overall in the second half, we made some tweaks. North Carolina had the ball, but I thought we defended much better.”

This latest loss to North Carolina knocked Racing to 4-11-5 in its expansion NWSL season. The team is 10 points from sixth place — playoff qualification — with five games to play.

Racing goes straight to Washington next for a 7:30 p.m. Saturday kickoff against the Spirit at Audi Field. Coverage will stream on Paramount+.