Racing regains its competitive edge in draw with OL Reign

The club earned a point in its first game under interim head coach Mario Sanchez. 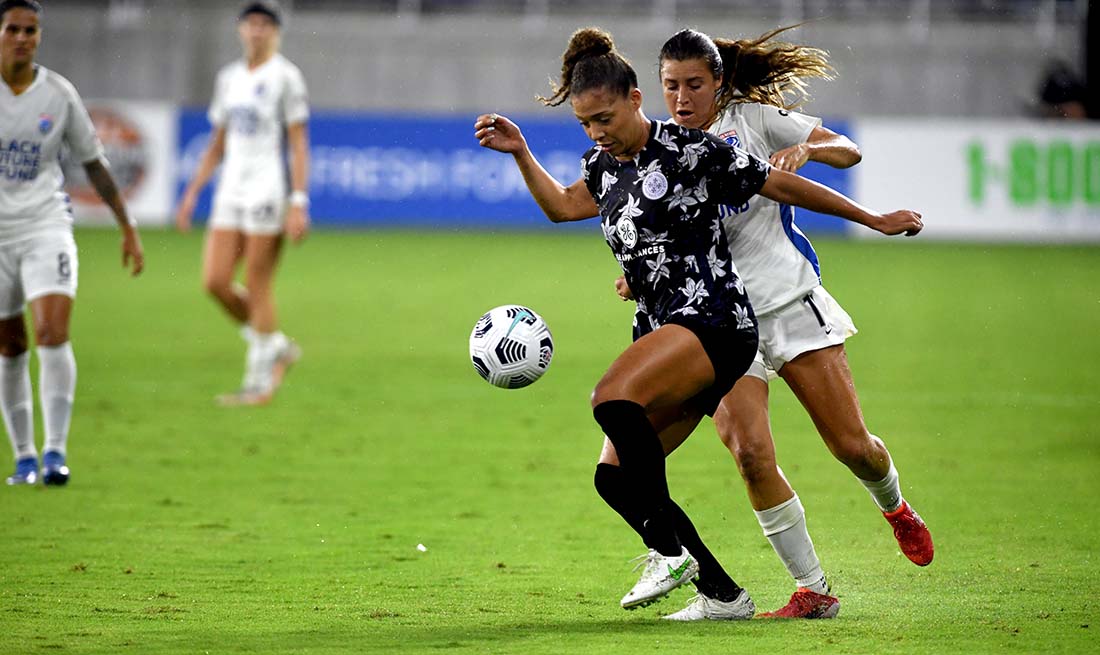 Nadia Nadim spotted the home side out to an early lead, getting in behind the defense to score in the 23rd minute. OL Reign’s Bethany Balcer equalized in the 74th minute with a headed goal.

Played under a light rain in front of 6,337 at Lynn Family Stadium, the game fell just four days after Racing tasked Sanchez — the head of Louisville’s burgeoning youth academy — to lead the team.

“I couldn’t be more proud of them — and this is about them," Sanchez said of Racing's players. "This has nothing to do with me. This is about them and them coming together and showing everybody who they are and what they’re about.

"As a team, the energy was phenomenal. So what I told them was I’m proud of them, and they should look each other in the eye and give each other a hug and be proud of each other.”

Sanchez made a few key changes, shifting star defender Emily Fox to the right side with center back Nealy Martin taking the left. And forward Jorian Baucom made her second start this season at the top of the formation.

Possession swayed Racing’s way for just 40% of the first half, but the ladies in lavender entered the locker room leading thanks to a well-executed counter attack. Cece Kizer played Nadim in behind OL Reign’s defense, and Nadim finished for her third goal since signing earlier this summer.

The visiting Reign — with a lineup featuring U.S. Women’s National Teamer Rose Lavelle of nearby Cincinnati — pelted 27 shots. Lavelle accounted for 10 of those alone.

A breakthrough for the visitors arrived amid some sustained pressure in the 74th minute. Sofia Huerta delivered a cross to Balcer at the face of goal, and the NWSL’s scoring leader put away her ninth goal of the season.

“I think there was a lot of energy out there from the girls tonight," said defender Gemma Bonner. "Obviously we got off to a great start, and I think we’re obviously disappointed to come away with a draw, but we’re definitely learning every single week. I think our focus now is if we can put on a complete performance for 90 minutes.

"Reign are a fantastic team and they’ve got quality, world-class players throughout the squad. I think we competed really well with them, and that’s something we’ve got to take forward into the latter part of the season.”

Sanchez viewed this performance as a baseline moving forward — a “minimum” sort of effort for Racing, which improved to 4-8-5 to remain ninth in the NWSL standings. OL Reign remained second in the league.

"Mario has really just emphasized to all of us to keep smiling and keep the mood light," Kizer said, "but also when it came down to it, we got down to business and we needed to do what we had to do over the last couple days. We prepared for today, and I think you could see on the field. We had a game plan that we were executing at the beginning and we just got a little lackadaisical.

"Once we had that goal, I think we struggle sometimes when we score one early on and we need momentum to get another, and we’ve had a lot of 1-1 games. But I think we still have a lot of learning to do, just testing each other and coming together as a group to get the job done.”

Continuing to pursue a playoff spot, the ladies in lavender next travel to play the Orlando Pride at 7 p.m. on Saturday, Sept. 11.

Player of the Match: Nadia Nadim