Nadim named to NWSL's Team of the Month for August

With two goals and an assist, she has provided a spark to Racing's attack. 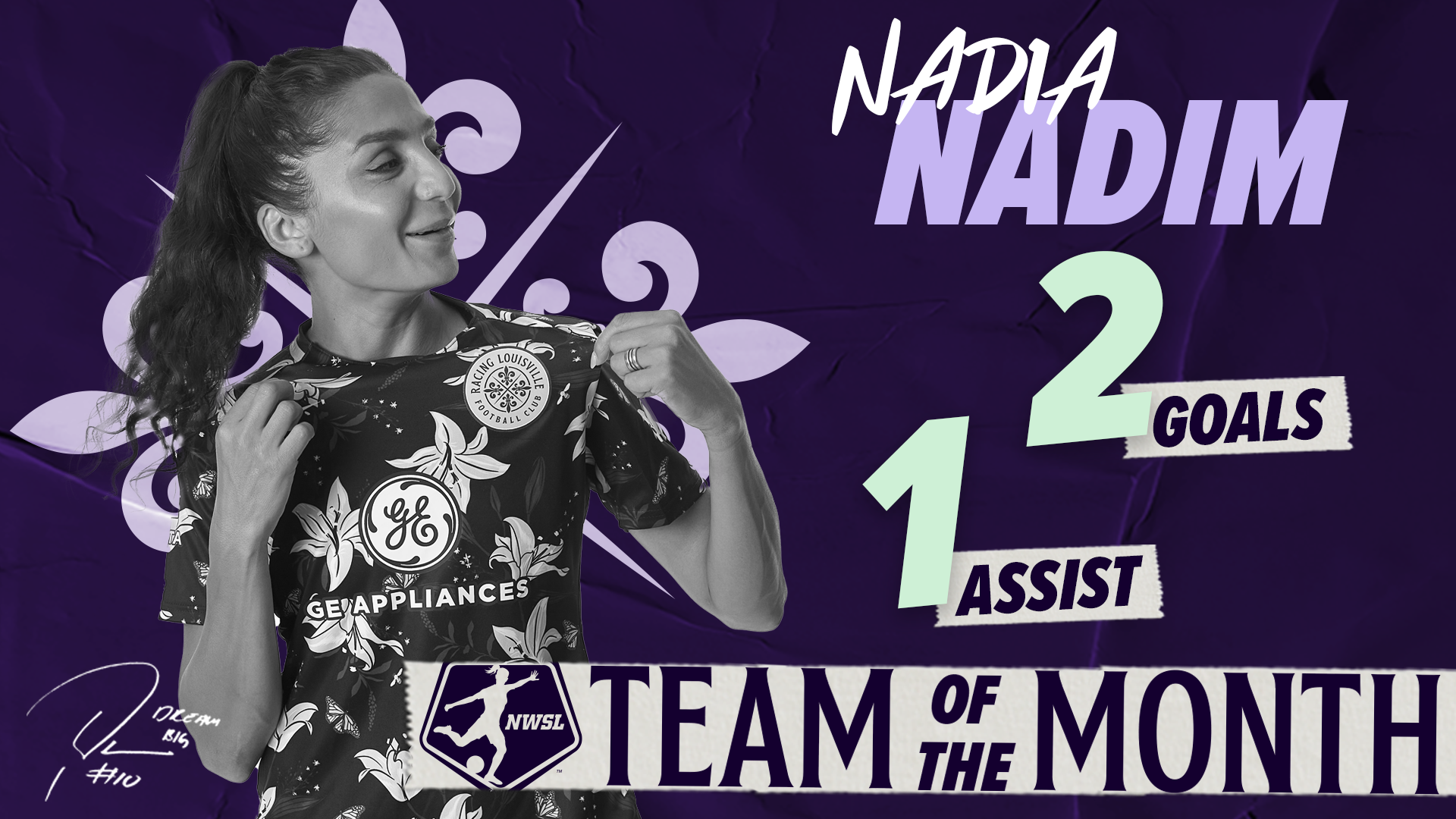 Racing Louisville FC forward Nadia Nadim was on Thursday among 11 players named to August’s National Women’s Soccer League Team of the Month as voted on by the NWSL Media Association, a collection of writers that cover the league on a consistent basis.

After signing with the club in June, Nadim arrived in Louisville in July and provided an immediate spark to the attack, scoring twice and adding an assist in four August appearances.

Nadim’s appearance is the third on the Team of the Month for Racing, which also had goalkeeper Michelle Betos selected in June and rookie defender Emily Fox selected in May.

The club continues its season at 7:30 p.m. Saturday, hosting OL Reign with tickets available at RacingLouFC.com/tickets.

Here’s more on the latest Team of the Month…

GK – Casey Murphy (NCC): Murphy earned four clean slates en route to an unbeaten 3-0-1 record for the Courage in August, making 19 saves throughout the month, including nine in the team’s 4-0 win over Kansas City.

D – Caprice Dydasco (NJNY): Named to every team of the month so far this season, Dydasco once again showed her ability to both defend the back line and jump into the attack, completing 62 percent of tackles in and tallying an assist in Gotham’s 2-1 loss to Portland. Dydasco sits second in the league in assists.

D – Ali Krieger (ORL): Another mainstay on defense, Krieger played in every minute of action throughout August, and contributed an assist in Orlando’s 2-0 win over Chicago.

D – Emily Menges (POR): Menges was once again solid in Portland’s defensive half this month, completing 85 percent of passes in the back and 70 percent of tackles to help the Thorns to a 3-1-1 ledger in August.

D – Carson Pickett (NCC): The league’s assist leader with five on the season, Pickett was integral in the Courage’s offense this month, contributing two assists in North Carolina’s 4-0 rout of Kansas City.

M – Jess Fishlock (RGN): Fishlock was solid in the midfield for her club throughout August, marked by her one goal-two assist performance in the Reign’s 5-1 win over Houston on August 7. The midfielder also tallied an assist on the opening goal in the club’s 2-1 victory against the Portland Thorns.

M – Denise O’Sullivan (NCC): Appearing in every minute of every game during August, O’Sullivan contributed over 360 minutes to the Courage attack with a passer rating of 87 percent, helping the team to an unbeaten month with a 3-0-1 record.

M – Angela Salem (POR): Salem’s presence in the Portland midfield helped the Thorns to a 3-1-1 record during the month, which included a highlight-reel goal in Portland’s rivalry game against OL Reign. The midfielder also earned a season-high three shots in Portland’s 2-1 win over Gotham.

F – Nadia Nadim (LOU): In an incredibly productive month for the Racing forward, Nadim notched two goals and an assist throughout the month, including the opening goal in a 1-1 draw against Gotham FC and the game-winning goal in a 3-1 victory over Kansas City.

F – Ifeoma Onumonu (NJNY): Comfortably in contention for this season’s golden boot, Onumonu tallied four goals across the month of August for a total of seven on the year, including a brace in Gotham FC’s 3-2 setback against OL Reign on August 21. The forward also tallied Gotham FC’s only goals in a pair of draws against Houston and Louisville.

F – Megan Rapinoe (RGN): The August player of the month, Rapinoe returned from the Tokyo Olympics in style, tallying two braces and four goals throughout the month, including the game-winning goals in OL Reign’s wins over Gotham FC and Portland.