Kamil: What we learned from Racing at OL Reign

Run down takeaways from Saturday's 2-0 defeat out west. 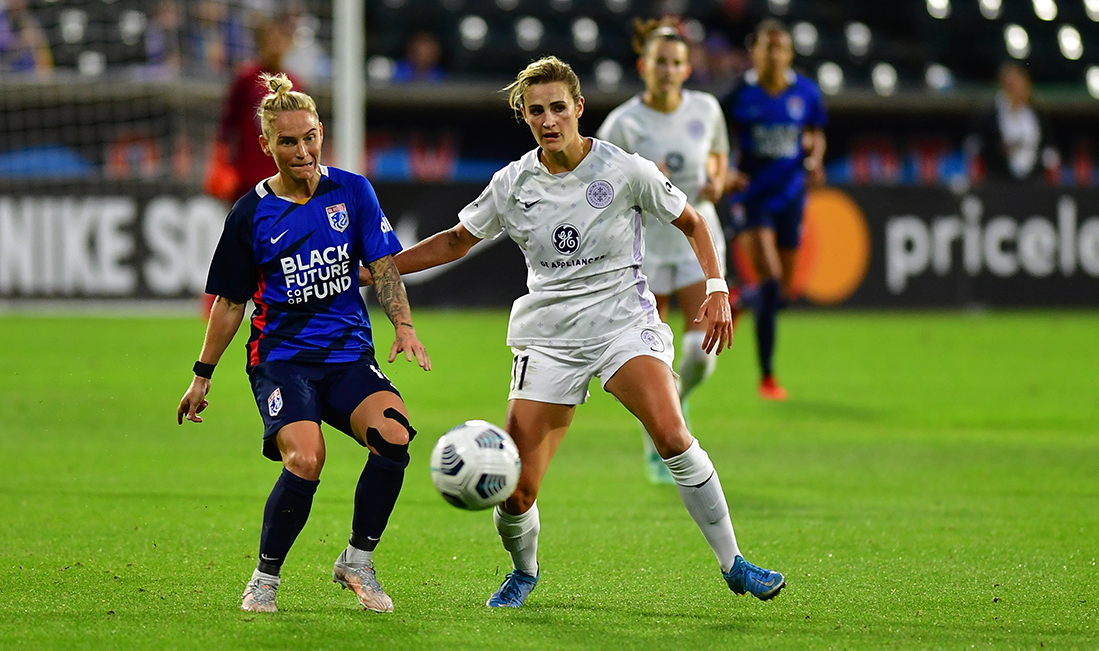 Racing Louisville FC carried much of the momentum through its first visit to Cheney Stadium in Tacoma, Wash., until a curling strike from French international Eugénie Le Sommer found the back of the net in the 27th minute. The seven-time UEFA Women’s Champions League winner, on loan from Lyon, made it brace from the top of the box just 16 minutes later to hand the visitors the loss in the first-ever matchup between the teams.

What the scoresheet doesn’t show is the power of the newly formed Racing attack due in part to the contributions of attacking midfielder Nadia Nadim, who made her first start in a lavender jersey on Saturday night. Louisville out-shot the Reign 17-10 with Nadim contributing four shots and four key passes.

“I think the second half — and large parts of the first half — were a reflection of the team we want to be on a consistent basis,” head coach Christy Holly said afterward.

Racing has shown it it virtually impossible to stop when capitalizing on chances created, going 3-0-1 in games where the expansion side has at least one goal. Of course, that didn’t materialize in Saturday’s 2-0 defeat.

The backline did well to minimize OL Reign’s strength in the attack, but a lack of finishing up top and possession problems through the midfield prevented the expansion club from leveling. However, when Racing was able to hold the ball and get added numbers in the attack, bright spots did shine through.

Here’s more of what we learned:

Nadim’s strong midfield presence also helped in the Racing defense, leading the team in both duels and aerial duels attempted.

Perhaps one of the biggest positive takeaways from the Racing attack is the ability to break oppositional lines with vertical passing and possession. This was on prime display in the 37th minute when Gemma Bonner connected with Savannah McCaskill out of the back following an offside call. Up the field, Kizer drew a foul.

Yuki Nagasato and McCaskill — appearing deeper in the formation these days — also continued to combine in dangerous areas and create chances, putting pressure on the Reign defense. The pair contributed eight crosses and three key passes on the night.

Emily Fox involved in the attack

Another clear positive takeaway was the ability of outside back Emily Fox to make an impact in the attack. Fox numbered two key passes and three crosses in addition to completing 17 passes in the opposition’s half. She also led the team in touches with 90.

Especially in the second half, Fox pressed high and took advantage of the space on the left side to try and get one back against the Reign.

In the 55th minute, Fox and Nagasato combined on the left as Fox played a low ball across the box to Ebony Salmon, who was unable to get her shot past Reign keeper Sarah Bouhaddi.

Fox was itching for a goal in the final minutes, ultimately having an 89th-minute chance blocked before she was pulled down inside the Reign’s 18-yard box.

As the newly established attacking unit begins to build chemistry and trust, mistakes like missed passes or giveaways can result. This was a main issue for Louisville Saturday night as turnovers resulted in some of the best of the Reign’s chances, including Le Sommer’s second goal.

Minutes before the half, Nagasato misplayed a pass that was picked up by Dani Weatherholt at midfield. She passed it off to Welsh international Jess Fishlock, who played a long ball in behind to leave Michelle Betos one-on-one against Le Sommer.

The passing accuracy out of the back was consistent, but as Louisville players ran into traffic in the opposition’s half, missed connections and miscommunications resulted in high lost possession numbers for Nadim and McCaskill. OL Reign clearly tried to pressure the ball heavy in midfield, forcing turnovers in order to avoid Louisville’s chance creation through possession.