How Bonner, Salmon are providing a boost to Racing Louisville FC

The English newcomers have certainly passed the eye test upon arrival in the NWSL. 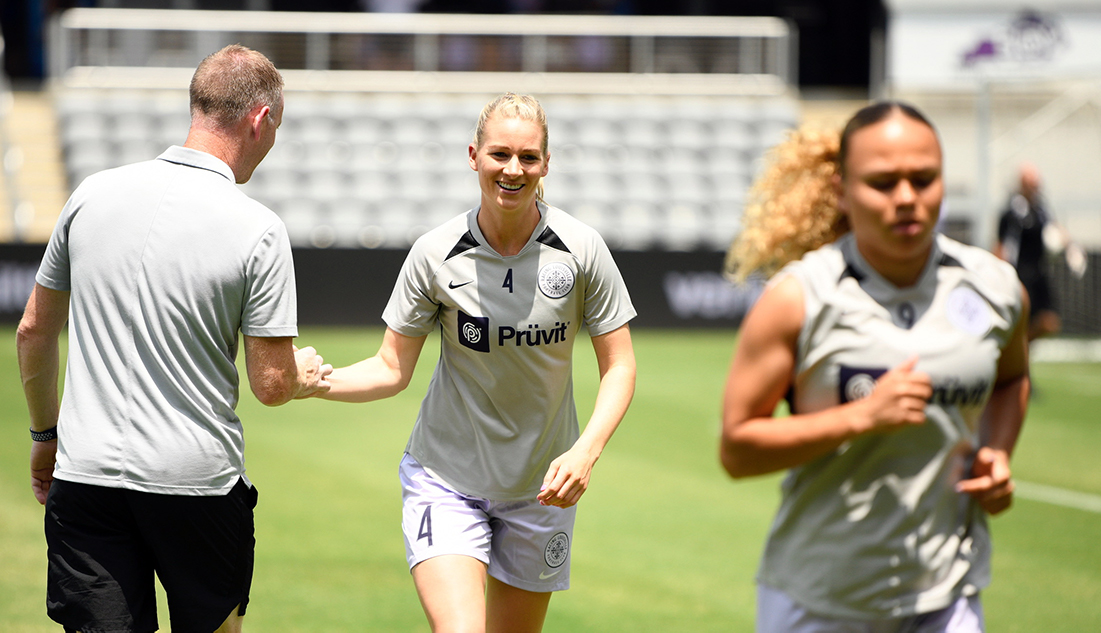 Having pieced most of its roster together from the 2020 NWSL Expansion Draft — in which future rival teams were permitted to protect their respective starting 11 players — Racing Louisville FC quickly established a reputation by fighting for results and punching above its weight in the preseason Challenge Cup tournament.

A couple of key signings have seemingly taken Racing to a higher level as the club nears the midpoint of its inaugural campaign.

Establishing themselves at opposite ends of Louisville’s formation, forward Ebony Salmon has registered three goals in her first five NWSL appearances, while it took 255 minutes for an opponent to score with defender Gemma Bonner on the pitch — that being the equalizer in Friday night’s 1-1 draw against the Orlando Pride.

“They’ve been big additions,” Racing coach Christy Holly said after the Orlando game. “…Neither of them are anywhere near full fitness just yet, so we know there’s going to be more to come.”

Holly then reminded that Racing is just a months-old club.

“We just played against — what did (Orlando) have — three World Cup winners on the field?” he asked. “For us to go toe-to-toe, for us to compete within that game and for large parts control that game, it’s expectational pleasing. Is there more to come? Absolutely.”

Bonner and Salmon, English natives who last played in the FA Women’s Super League, began integrating with their new squad in June. Both have passed the eye test, while their roles have translated on paper, too.

Bonner is often seen pointing somewhere or talking to someone on Racing’s defensive line. That’s to be expected from a veteran center back who arrived to Louisville via transfer from Manchester City. Bonner previously captained Liverpool to multiple Women’s Super League titles as well.

“In my position, you have to try to control the people around you and the people in front of you and if you do that as a team, you hope to stay connected,” Bonner said. “Obviously, it’s a young team and everyone is still learning, but at the same time, they’re speaking to me and I think that’s what’s so good about this team. We’re so young. We’re so eager to improve.”

Racing is 2-0-1 thus far in games when Bonner has appeared, conceding the lone goal at Orlando. Louisville has allowed 12 goals with a 1-4-1 record in its other regular-season games.

“Gemma has been amazing on and off the field,” said Bonner’s fellow defender, Emily Fox. “Honestly, I can give her so many compliments.”

Fox described Bonner as “vocal” but also a leader by example.

“So I think having Gemma has been amazing,” she added. “We’re very excited to be playing with her.”

Salmon has meanwhile snagged the headlines with her quick transition to the American game. The 20-year-old — who earlier this year received her first call up to represent England’s senior national team — scored her first three goals in an average of 78 minutes played apiece.

Salmon’s pace has also aided her teammates in the attack, with Racing numbering five goals in games when she appears compared to the two combined in four matches prior to her debut.

Bonner and Salmon both played a part in Racing’s fastest-ever goal, a 21st-minute strike Friday that put them ahead against the Pride. Goalkeeper Michelle Betos began a quick counter up the right side before Bonner advanced the ball to Erin Simon, who continued it to Cece Kizer.

After a ball behind the defense by Kizer, Salmon created separation in the box from Orlando defender Ali Krieger and sent a shot past goalkeeper Ashlyn Harris — both of them U.S. internationals with World Cup victories.

Now 3-0-1 when scoring first, Racing finds itself just outside the NWSL playoff line at seventh place. And as for Holly’s assertion that there’s more to come? The club is awaiting the arrival of one more major international signing, with forward Nadia Nadim on her way once she receives a work visa.