History repeats itself as Racing, Orlando play to dramatic draw

This time it was the Pride who equalized in stoppage time Friday night. 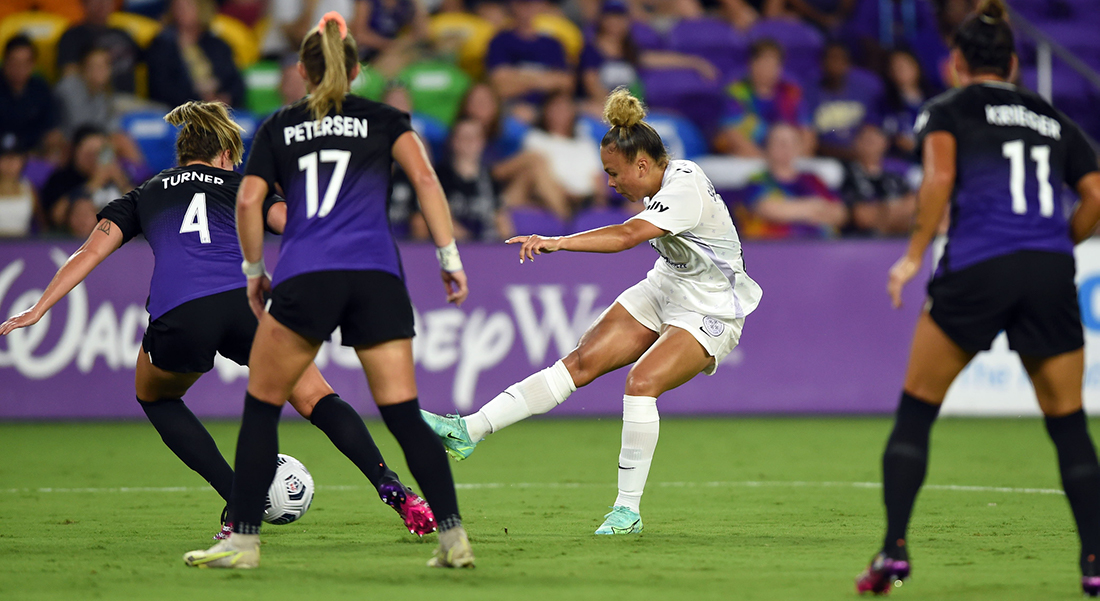 In terms of a budding rivalry between Racing Louisville FC and the Orlando Pride, it was at least a fitting finish.

Just short of three months since Racing Louisville FC scored a 93rd-minute equalizer at Lynn Family Stadium in the club’s inaugural game, the Pride matched with a game-tying, 94th-minute goal of their own Friday night at Exploria Stadium.

The final score was 1-1 in an away contest Racing controlled until the waning moments, using some team brilliance to get Ebony Salmon the club’s fastest-ever goal. The 21st-minute strike looked to be enough in a game where Orlando didn’t put a shot on target until the 82nd minute.

But the Pride’s second try knotted the score when a long delivery from goalkeeper Ashlyn Harris bounded through the box and to Sydney Leroux, a World Cup winner with a nice finishing touch. And so marked a second dramatic chapter for this series.

“You just keep looking ahead,” said Racing coach Christy Holly. “We can feel the sting of this and the hurt of giving up two points at the very end, but the performance is what we wanted and the steppingstone we needed as we continue to look forward.”

Whereas Racing has heavily relied on its captain and goalkeeper, Michelle Betos, Friday’s game evidenced progress. She has numbered 49 saves — 21 more than any NWSL counterpart — but was rarely called upon in Orlando. That was especially so with Louisville controlling 55% of possession during a game it led most of the way.

A 20-year-old from England, Salmon, who just joined Racing last month, has now scored three goals in her five appearances in the United States. Her debut strike against the Houston Dash will be remembered for its individual brilliance, but Friday’s tally was as much a tribute to her teammates.

The sequence started from the back, with goalkeeper Michelle Betos feeding a pass up the right side that traveled quickly from Gemma Bonner to Erin Simon and then Cece Kizer. The fourth pass, a well-placed ball by Kizer behind the defense, got to Salmon, who shrugged off U.S. international defender Ali Krieger and finished with ease.

It took just 15 seconds from Betos’ feed to the goal on the other end of the pitch.

“We’ve all seen what Ebony can do and the threat that she’s got in behind,” Bonner said. “We worked on a couple of patterns and we felt where we could exploit them. I think it showed in the transition, that if we played quickly and with quality we could get through them.”

Racing’s record now stands at 3-4-2, and the result continued a trend. Louisville’s four losses — two apiece — have come against league stalwarts NC Courage and Portland Thorns FC. The new club is unbeaten against all other opponents so far.

Orlando, which is 5-2-3, used the point to match the Courage atop the NWSL table, bouncing back from consecutive defeats entering Friday.

“Obviously we’re really disappointed with a tie,” said Racing defender Emily Fox,” but I definitely think we can learn from this and also be positive about it because we did control the game and we played well besides the last couple minutes."

Racing’s attack wasn’t overly bright aside from the goal-scoring moment, though Salmon nearly returned the favor to Kizer on a 36th-minute cross from the right side. Kizer was in position but couldn’t get ideal contact to double the lead.

The Pride — down a pair of top stars with Alex Morgan (United States) and Marta (Brazil) already off to the Tokyo Olympics — saw their next-best chance outside of the goal just before the halftime whistle. A Taylor Kornieck from outside the box was deftly guided around Racing’s wall but only found side netting.

It was a physical game, something Holly lamented afterward, with the Pride conceding 17 fouls and Racing 15. The ladies in lavender will also walk away looking for more of a finishing touch, as Salmon’s goal marked their only shot on target.

Racing next hosts the Washington Spirit on July 25 at Lynn Family Stadium. NWSL rivals will continue to go on without their Olympians while Louisville’s young roster remains in tact, an opportunity as it chases a playoff spot.

Player of the Match: Ebony Salmon