The ladies in lavender were held scoreless Saturday at Lynn Family Stadium. 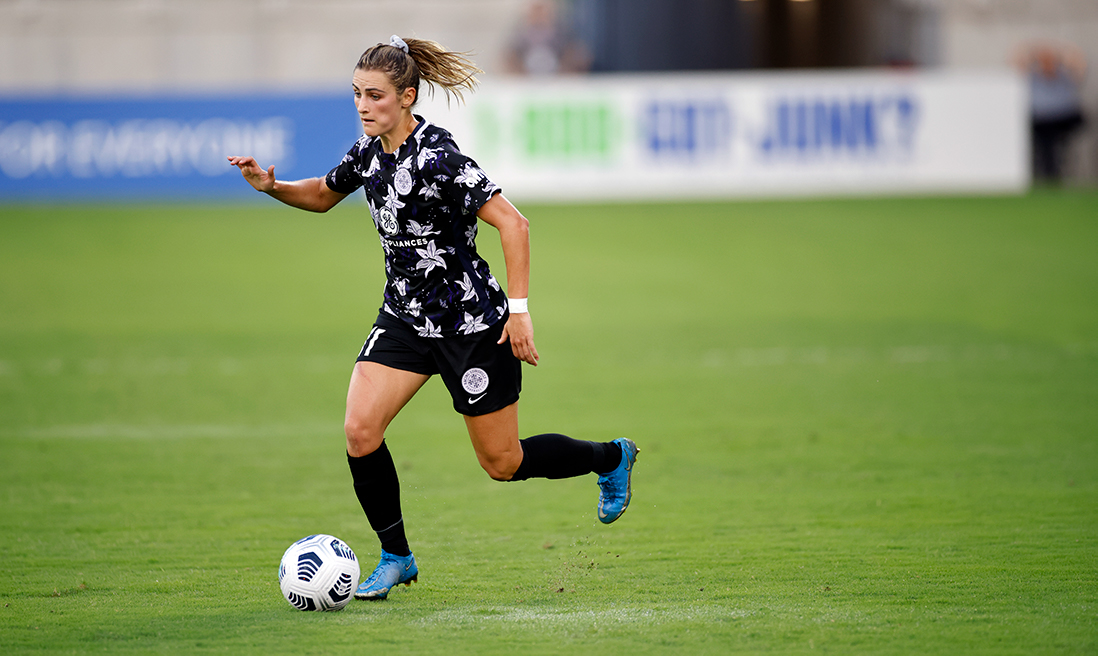 Racing Louisville FC discovered Saturday that a Portland Thorns FC down five Olympians remains one of the top threats in the NWSL.

The Thorns — short their regular arsenal of stars on international duty — scored a goal on either side of the halftime whistle to walk away with a 2-0 victory at Lynn Family Stadium.

The result squelched some fast-built momentum for the host side. Only seven games into its inaugural regular season, Racing entered with victories in two of its last three games and stood to rise to third on the league table with another win.

Instead, a frustrating 90 minutes saw Racing concede a first half penalty kick and a second half goal off a Portland Thorns set piece. Louisville landed four shots on target but couldn’t manage to get one past Portland’s goalkeeper, Bella Bixby.

“I don’t think we really ever got our stride,” said Racing coach Christy Holly, “but we started the game well, created a couple opportunities, then we kind of got a little bit lost within of the game. Portland, they started to gain a little bit of control in defining moments within the game, and so we have to look at ourselves and find out what we can do better."

It was by no means a dominant performance by the winning side, with Racing starting on the front foot. A Lauren Milliet cross the Thorns failed to clear in the first minute landed to Racing forward Ebony Salmon, who had her shot turned away by Bixby.

Likewise out of the halftime locker room, Milliet got a cross into forward Yuki Nagasato. Her point-blank shot didn’t get the desired contact, and Bixby stopped that try, too.

“I think we had some good chances in the first half — early in the second half as well," Milliet said. "It’s a little disappointing that we couldn’t capitalize on those. I do think there were some good moments that we can take from this, but it’s about growth and how we can move forward to the next game.”

Portland then made more of its chances, starting in the 29th minute when Nagasato’s stray leg cut down Thorns forward Rocky Rodriguez in the box. Rodriguez — the 2016 NWSL Rookie of the Year, coincidentally drafted by Holly when he was then at the former Sky Blue FC — converted her ensuing penalty try.

The lead doubled in the 52nd minute off a short Portland corner. Emily Menges found herself with possession on the left wing and crossed to teammate Simone Charley for a headed goal that created an advantage too large for Racing to overcome.

The ladies in lavender continued pushing, however, particularly in the 75th minute when a Savannah McCaskill shot from distance hammered off the near post.

“I do think the bigger picture is important, but each game is critical and each game matters,” said defender Emily Fox. “Getting in the habit of, ‘If we lose just one game,’ that creates bad mindsets. I think all of us feel that way. All of us want to win, want to be improving and want to get results.”

Before the game went final, Portland also made a bit of history when 15-year-old Olivia Moultrie — signed by the club earlier this week — came on as an 84th-minute substitution, becoming the youngest player in league history to appear in a game.

At 3-4-1 overall, Racing turns around to play at first-place Orlando Pride at 7:30 p.m. Friday in a game that will stream exclusively on the NWSL’s Twitch channel.