Preview: What to Watch for with Racing vs. Portland Thorns FC 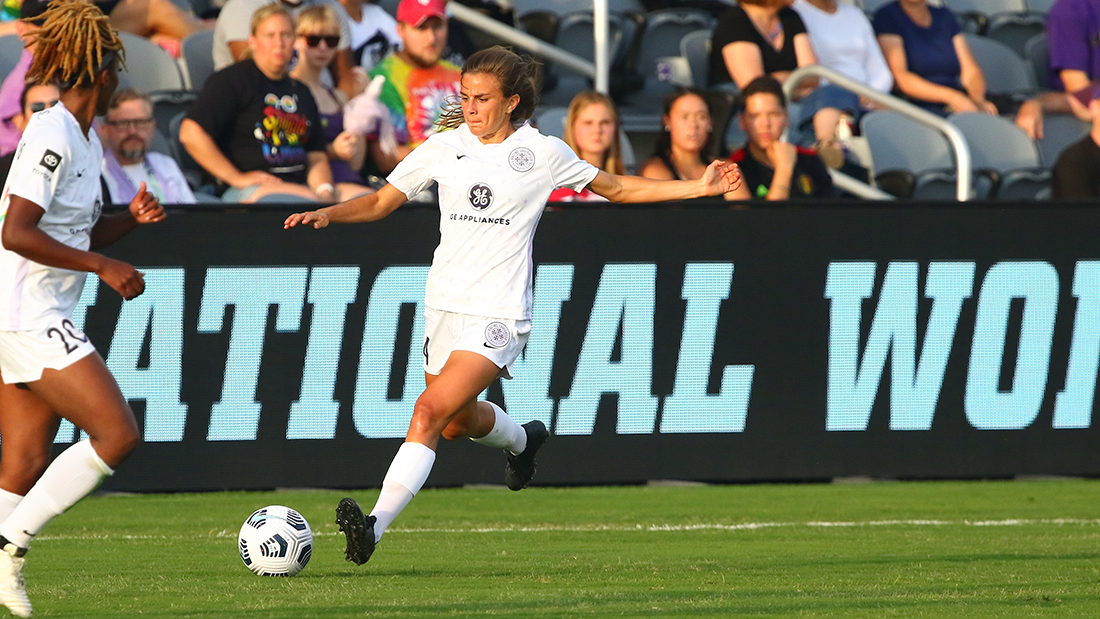 Just as most Racing Louisville FC reinforcements arrive, the rest of the NWSL is poised to lose some key pieces of rosters in the run up to the Tokyo Olympics.

No club might be hurt more by those departures than this weekend’s opponent, Portland Thorns FC, which will be missing upwards of five regular starters to international duty.

Racing hosts the Thorns at 7:30 p.m. Saturday inside Lynn Family Stadium, marking a rematch of a 3-0 Racing defeat back on June 5 remembered for Louisville’s travel and injury woes.

Of course, the ladies in lavender won’t risk flight delays this go around. Since the first meeting, they’ve also welcomed now-healthy defenders Addisyn Merrick and Julia Ashley to the rotation while integrating new signings Gemma Bonner and Ebony Salmon.

Amid a congested schedule following an international window, Racing tallied six points in three games to move to sixth on the NWSL table — a playoff position at the quarter mark of the expansion side’s 24-game inaugural season.

As for Portland, the Thorns will be missing goalkeeper Adrianna Franch and defender Becky Sauerbrunn plus midfielders Lindsey Horan and Crystal Dunn, all on the U.S. Women’s National Team. Forward Christine Sinclair also represents Canada.

It’s an opportunity for Racing to continue its climb up the table. Here’s what to watch for Saturday…

"If we move our focus to the end of the season, we’re going to bypass a lot of progress in the middle and with young players like Ebony and [Emily] Fox that have come in and developed, and they’re growing in the season...If we veer toward, ‘We won a game and we’re doing great,' then we lose sight of what we’re trying to do, which is getting better on a daily basis. If we take care of our development and allow players such as Ebony, such as Fox, such as Freja [Olofsson], such as Savannah [McCaskill] to continue to grow, the playoffs will take care of themselves.”

“First and foremost, it’s fantastic to have players like Gemma players like Ebony. To be able to attract them to our club and our city, that's a huge statement for us. The impact they bring is they galvanize the team, and they add to the group chemistry. They’re fun people, they’re serious people, they know when to work hard and when to enjoy themselves. They add goals, they add clean sheets. They’re having a tremendous impact on this team and we’re delighted that they’re here.”

Watch the match on Paramount+ with play by play from Josh Tolle and color commentary by Lisa Roman. Internationally, fans can also stream the match on Twitch.

No. 1s meet: A key matchup of interest Saturday will see Racing defender Emily Fox (selected first in the 2021 NWSL Draft) face Thorns striker Sophia Smith (the top pick in 2020). The left back Fox has excelled as a pro so far, being named to the NWSL’s Team of the Month for May. Smith missed Portland’s prior matchup with Louisville due to injury, but her 11 shots on goal still rank second in the league.

Rose City connections: Racing goalkeeper Michelle Betos played for the Portland Thorns from 2014 to 2016. During that time, Betos made 32 appearances for the Thorns, became the first goalkeeper to score in the NWSL, won Goalkeeper of the Year in 2015 and lifted the 2016 NWSL Shield.

Bet on Betos: The veteran between the posts hasn’t lost a step from those days, and Racing has leaned on her plenty. Betos leads the NWSL with 43 saves — second on the list has made 27 — with her efforts recently recognized by both a spot on June’s NWSL Team of the Month and the league’s most recent Save of the Week.

On frame: Betos, however, faced a season-low three shots on target as Racing’s improving defense made seven blocks — three were from Bonner, who registered a game-high 10 clearances — and the attack kicked in. For the first time this season, Racing tallied more shots on goal than an opponent, numbering five.

Salmon strikes again: Salmon, who arrived from England’s Bristol City, is averaging 1.45 goals every 90 minutes of action, the most of any player who has played at least 90 minutes in the league. Her second strike in three appearances represented the game winner for Racing in Chicago as she converted amid a first half downpour. That followed a debut game-winning goal a minute after subbing on June 20 versus the Houston Dash.

Homecoming queens: Returning to their former club — the Red Stars traded them before last year’s expansion draft — both Yuki Nagasato and Savannah McCaskill found the back of the net in Chicago. Nagasato first cleaned up a loose ball in the box in the 56th minute before McCaskill one-touched a deflected 62nd-minute cross. Both goals were their first in lavender.

Cece's shift: Dating back to the Challenge Cup, forward Cece Kizer has been integral to Racing’s attack with three goals and two assists across all competitions. With Salmon’s arrival, though, she has taken on a new role, moving from center forward to a right wing against Chicago. She added that second assist by finding Salmon, continuing to produce on a consistent basis.

Away woes no mo’: Saturday’s victory against the Red Stars marked the first time Racing scored and won outside of Lynn Family Stadium in its young history. Previously, the club had been shut out in other road games, though it did earn a point to close the preseason Challenge Cup tournament with a scoreless draw May 2 at NJ/NY Gotham FC.

Waiting game: While Salmon and Bonner have fully integrated into training, the club is still waiting for its other star international signing’s arrival. Forward Nadia Nadim, previously of Paris Saint Germain, is awaiting her visa. The Danish international has previously played in the NWSL with the Thorns and the former Sky Blue FC.