Preview: What to watch for with Racing Louisville vs. Houston Dash

After the international window, the club is back in action at 3 p.m. Sunday. 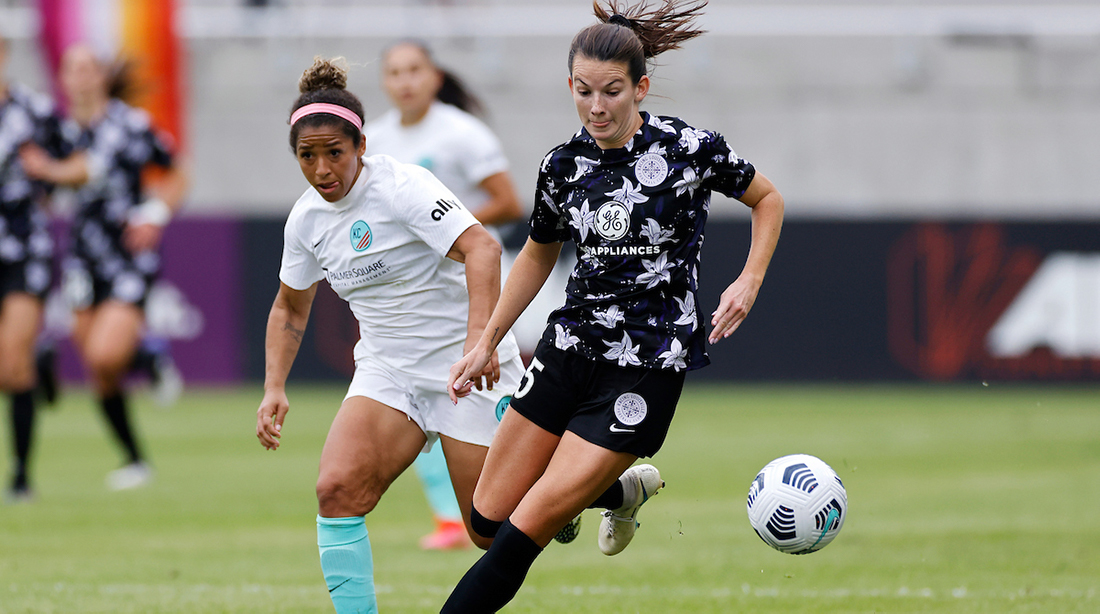 After the NWSL’s international break, a revitalized Racing Louisville FC returns to action Sunday when hosting the Houston Dash at 3 p.m. inside Lynn Family Stadium.

While the club dropped its last two games by a combined 8-0 score — defeats at NC Courage and Portland Thorns FC — those came without the services of key players newly available for selection this weekend.

In recent weeks, English defender Gemma Bonner and forward Ebony Salmon have integrated with the team; defender Addisyn Merrick has been medically cleared for the first time this season; and forward Cheyna Matthews continued to get fit, making two starts with Jamaica’s national team while on international duty.

Racing, at 1-2-1 overall, could use the help on this upcoming stretch, which consists of three games in six days. After the Houston tilt, the Courage visit Wednesday before Louisville travels to Chicago the following Saturday.

As for the Dash, who are 2-2-1, the 2020 Challenge Cup champs have seen players’ stocks rise significantly over the last year. Midfielder Kristie Mewis and goalkeeper Jane Campbell are on the radar to represent the United States in the Olympics, while England’s Rachel Daly and Canada's Sophie Schmidt are international standouts.

Here’s more of what to watch for Sunday…

“You know how much we love playing at Lynn Family Stadium. It is one, because the stadium is fantastic, but two for the people that are there. The fans are passionate. They are excited. We talked about this from day one. I want a connection with the fans. Now as the restrictions lift, we can grow that connection between us and the fans even stronger. That fuels us a little bit more.

“...For Houston, they are the 2020 Challenge Cup winners. They are really growing from where they left off. They have some fantastic players in the middle of the field through Kristie Mewis and Shea Groom. They have great organization at the back three with Megan Oyster and Katie Naughton. They are a very difficult team to break down. We have highlighted some areas where we need to dictate to them what is going to happen within those moments. If we allow them to control the game, if we allow them to control the tempo, it could be a long afternoon. We will go out and set the terms for them rather than letting them enjoy the stadium.”

Watch the match on Paramount+ with play by play from Mike Watts and color commentary by Kaylyn Kyle. Internationally, fans can stream the match on Twitch.

FULL CAPACITY: Sunday’s match will mark Racing’s first allowing full capacity at Lynn Family Stadium, a boost from 50% the last time the club hosted a game in May. Louisville City FC, the men’s club also operated by Soccer Holdings, drew a venue record crowd of 12,115 at its June 12 game in what was the stadium’s first 100% capacity game.

HOME FIELD ADVANTAGE: Racing has found much more success in front of its supporters. Dating back to the preseason Challenge Cup tournament, the new club is 1-1-2 across all competitions at Lynn Family Stadium, including its 2-0 victory May 21 over the Washington Spirit. In all but one of those home games, Racing also scored multiple goals, the exception being a scoreless draw May 15 to open against Kansas City.

SCORING TOUCH: It remains to be seen how new roster additions will reshape the lineup. In the meantime, forward Cece Kizer has carried the scoring load for Racing, hitting the back of the net in three of Racing’s four home games to go with an assist. With Salmon available and Matthews healthy, Kizer may eventually gravitate to her more natural role as an attacking midfielder.

BRICK WALL BETOS: Goalkeeper Michelle Betos has been vital to Racing’s defensive efforts. She leads the league with 27 saves, an indication that she can get in the right place at the right time — but also that a young Racing team has called on her to help quite often. Betos recorded nine saves last time out against Portland, one off her season-high of 10 in the Washington game.

SUPER MOM CHEYNA: By subbing on in the 84th minute against Portland, Matthews made her return to the field for the first time since giving birth to her second child in December. Matthews’ last NWSL appearance had been in September of 2019, when she earned an assist with the Washington Spirit against the North Carolina Courage.

ON INTERNATIONAL DUTY: Following her return with Racing, Matthews joined the Jamaican Women’s National Team to compete in the Summer Series. Matthews started both matches for the Reggae Girlz, who played Nigeria and the United States in Houston. While Matthews is a Massachusetts native, her mother is from Jamaica, allowing for the dual-national status.

MORE ON THE WAY: Racing announced its latest high-profile signing during the international break in Danish international forward Nadia Nadim, who most recently won the Division 1 Féminine title with Paris Saint-Germain, chipping in 10 goals on the campaign. Similar to Bonner and Salmon, Nadim will arrive to Louisville upon receipt of her work visa.

REGULAR SEASON DEBUT: By subbing on for Erin Simon in the 84th minute against Portland, defender Sinclaire Miramontez made her NWSL regular season debut against the Thorns. Seven more Racing players on an especially young squad are still awaiting that moment, with the list including goalkeepers Katie Lund and Shelby Money; defenders Julia Ashley, Bonner and Merrick; midfielder Noelle Higginson as well as the new forward Salmon.

MANAGERIAL MATCHUP: Racing head coach Christy Holly has faced off against the Houston Dash four times as coach. During those meetings, Holly posted a 3-0-1 record while leading the club formerly known as Sky Blue FC, now NJ/NY Gotham FC. This is his best record against any active NWSL team. Sunday’s game, however, will mark Holly’s first time going up against current Dash coach James Clarkson, who joined the club in 2019.

LONE STAR CONNECTIONS: Two players on the Racing roster — Kizer and Simon — previously played for the Dash. Both were selected by their current club in the 2020 NWSL Expansion Draft and have gone on to become regular starters in Louisville. Additionally, the goalkeeper Lund grew up four hours north of Houston in Plano, Texas.