Costello: What we learned from Racing vs. Portland Thorns FC

He leads off with the standout play of defender Erin Simon. 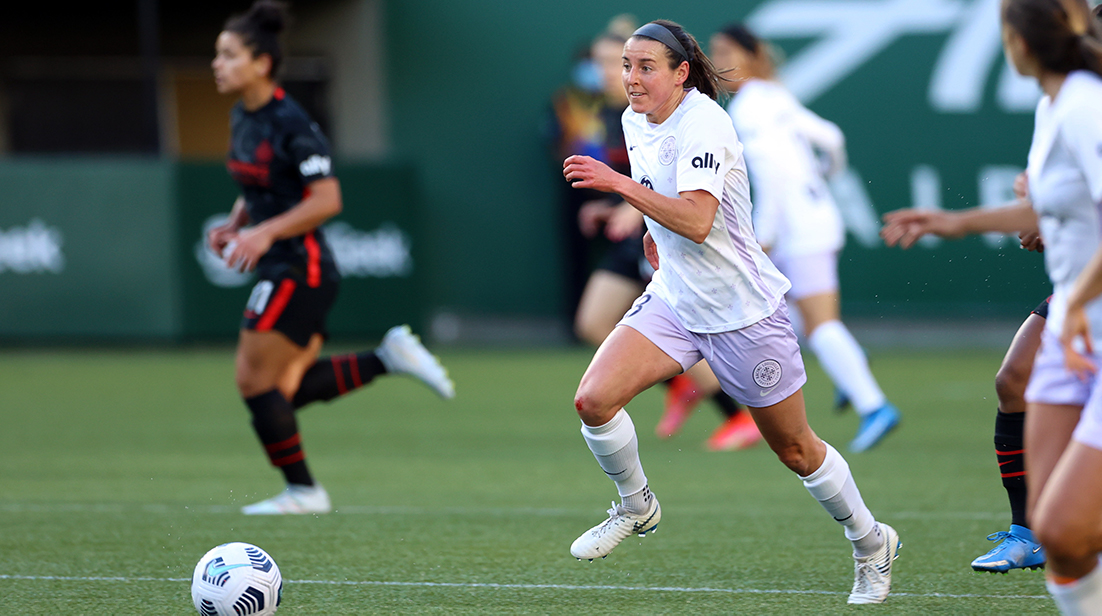 Racing Louisville FC had no easy task going from an away match against NC Courage to Saturday’s late night contest at Portland Thorns FC. Accordingly, a meeting with a strong Cascadia side ended in a 3-0 loss.

Less-than-ideal scheduling and travel issues that delayed the team’s cross-country trip made things difficult for a young squad, but supporters won’t hear those as excuses — and both coach Christy Holly and players didn’t make them after the final whistle.

There are lessons to learn — and a few positives to take away — from Racing’s last match before a two-week international break. Here’s what we learned.

Quietly building a strong season is right back Erin Simon. She hasn’t contributed offensively with assists or goals in the regular season, but her impact on defense is flying under the radar. Saturday, Simon battled U.S. international midfielder Lindsey Horan and forward Morgan Weaver. The end result was a usual Simon performance of clearances and recoveries — areas that don’t normally get included in highlight reels.

Overall, the former West Ham United defender cleared seven and recovered eight. The way she’s able to take back possession on heavy touches from the opponent are great tape for her younger teammates to study. Simon puts herself into positions where, if the opponent gets greedy and stretches a dribble to cover more ground, she fills the gap and boxes out opponents like a basketball center. Once Simon wins the ball, she quickly moves it up field to help create chances.

Horan contributed for Portland with an assist and goal, but they weren’t when Simon was tasked with taking her one-on-one. As this team grows, experienced defenders like Simon are crucial in any success Racing has.

When people say that Louisville is a young team, look at Saturday’s lineup as Exhibit A. In the starting 11 were three rookies: defenders Emily Fox and Nealy Martin along with forward Emina Ekic. All three first-year pros had positive moments.

Defensively, Martin blocked four shots and cleared seven from a powerful Portland. Fox and Ekic continued doing what supporters have seen all season. When Fox got the ball in open — and not-as-open — space, she maneuvers in front of her to move Racing into the middle and final third. Once there, Ekic had moments where her creativity on the ball allowed potential chances. What may have stuck out the most was the team’s composure.

Even though the score line wasn’t in Racing’s favor, they improved in how they responded after allowing a goal. Against Carolina last weekend, once the second goal was conceded in the 60th minute, two more followed in quick succession. Against Portland, Racing didn’t stop fighting after any of the three goals allowed. It’s an important lesson for a team that’s in the early stages of building its franchise’s culture. Holly values these incremental gains.

“We’re sitting in the middle of Portland with a brand-new team against a team of World Cup winners,” Holly said. “Of course it’s not going to be easy. We just want to make sure we’re chipping away at everything we’re doing and trying to get better every week.”

Reinforcements on the way

Racing spent three of the first four weeks of the NWSL regular season facing top teams. The new side has overcome pressure, wowed home fans with its first victory and learned a lot of lessons.

They’re also tired. In four matches, seven players have played every minute, or within 10 minutes of every minute of the season. Compare that to three for the Washington Spirit and four each for the Courage and Thorns.

Also, only 14 players have seen the field for at least double-digit minutes on the field. It’s already difficult enough to face off against former NWSL champions when legs are rested. Racing has shown it can compete on the field but now needs to add comparable workforce.

“In the next two weeks we’ve got a few players coming in that will help add more depth and allow us to add more rotation to what we’re doing,” Holly said.

Veteran defender Gemma Bonner and the FA Women’s Super League nominee for young player of the year in forward Ebony Salmon should both work into the squad off the international break.  Internally, it’s not necessarily creating position battles for starts, but it’ll be a by-product of adding starting-caliber talent.

New names, and players returning to 100% like forward Cheyna Matthews, midfielder Taylor Otto and defender Julia Ashley, lift their teammates in practice and give Holly a variety of options to use in his system.