Preview: What to Watch for with Racing at Portland Thorns FC

It's a late-night battle out west as Racing visits Providence Park. 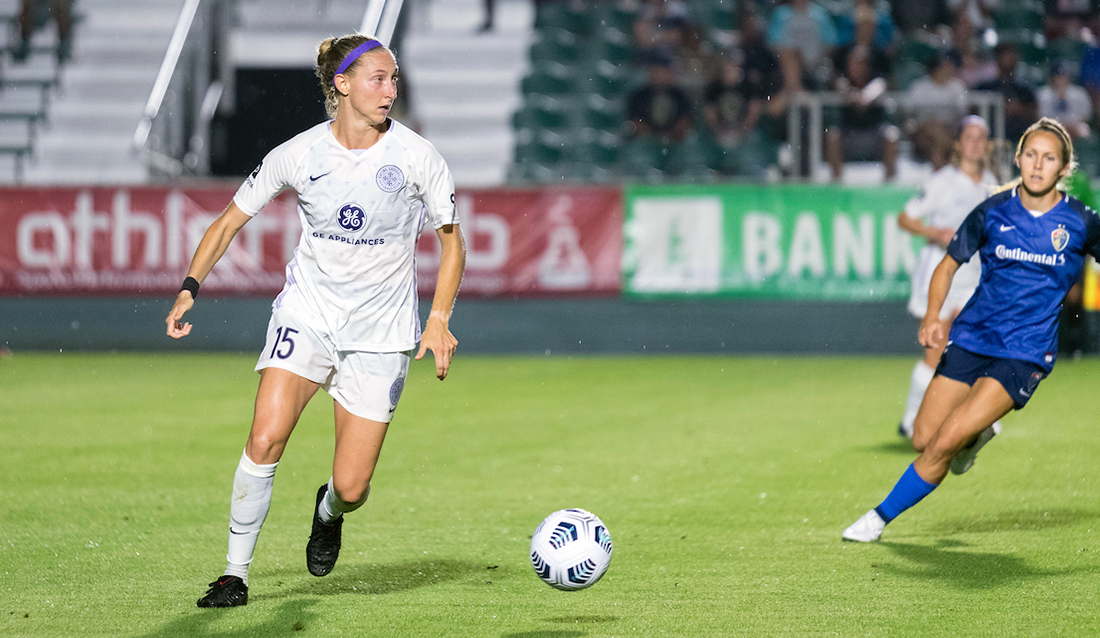 The club is looking to bounce back from a 5-0 defeat a week ago to perennial NWSL powerhouse North Carolina Courage before returning to Lynn Family Stadium — with 100% capacity allowed — versus the 2020 Challenge Cup winner Houston Dash (June 20) along with a rematch against the Courage (June 23).

Since raising a Challenge Cup trophy, Portland has continued to perform well into the regular season. The Thorns most recently defeated Challenge Cup runner-up NJ/NY Gotham FC last weekend and sit third on the table.

Saturday’s game will take place with limited fans in attendance at Providence Park, also the home to Major League Soccer’s Portland Timbers FC. It will live stream exclusively on the NWSL’s Twitch channel.

“Everybody’s on different body clocks all over the place" as the team experiences travel hiccups to Portland. "For example, I got to bed last night at probably 1:30, and I was wide awake at 4 o’clock, which is 7 o’clock (in Louisville). So the players are going to go through the same thing, and by the time the game starts, it’ll be 7:30, which is 10:30 (in Louisville) which is typically where you’re shutting it down

"…When we’ve done it in the past, we’d always have two training sessions out here prior to the game. We’ll find out (Friday) if we’re able to get one in. It’s a challenge, but if there’s a group of girls you’d want to have to do this with, it’s this group. They’ve got their heads down. They’ve not had one complaint. They know it’s all out of our hands. We’ve said from the start, if we’re going to get anything, we’ll have to fight for it. This is another example.”

Watch the match on Twitch with play by play from Mike Watts and color commentary by Jenn Cooper.

NWSL after dark: Saturday’s trip to Portland marks the club’s first outside the Eastern Time Zone, and the start time is the latest of the season. The only kickoff close to 10:30 p.m. is a 10 p.m. start when Racing also travels west to play OL (formerly Seattle) Reign at 10 p.m. July 31.

Away woes: Through Racing’s first three road games across all competitions, the club has yet to find the back of the net. In addition to the regular season NC Courage defeat, there was a prior Challenge Cup loss April 15 at Washington and a May 2 draw at Gotham FC.

Prior shutout streak: Having conceded in the seventh minute in North Carolina, Racing ended a run without an opposing goal that stretched 282 minutes, dating back to that Gotham draw. Throughout a run of three clean sheets — which included the club’s first victory May 21 over Washington — goalkeeper Michelle Betos tallied 14 saves.

No. 1s meet: A key matchup of interest Saturday will see Racing defender Emily Fox (selected first in the 2021 NWSL Draft) face Thorns striker Sophia Smith (the top pick in 2020). So far this season, Smith leads the NWSL with shots on goal (10) and has found the back of the net twice, while Fox has emerged at left back to make the NWSL Team of the Month on debut.

Rose City connection: The goalkeeper Betos played for the Portland Thorns from 2014 to 2016. During that time, Betos made 32 appearances for the Thorns, became the first goalkeeper to score in the NWSL, won goalkeeper of the year in 2015 and lifted the 2016 NWSL Shield.

Managerial matchup: Racing coach Christy Holly has faced off against Thorns head coach Mark Parsons four times. During those meetings, Holly posted a 1-3 record against Parsons while leading Sky Blue FC, now known as Gotham FC. This will be the penultimate meeting between the two coaches, as Parsons plans to leave the NWSL at the end of the season to coach the Netherlands Women’s National Team.

Providence Park: This weekend, Racing will play at one of the most daunting away venues in the NWSL. Providence Park, home to the Thorns and Timbers, is a centerpiece in a town that proudly calls itself “Soccer City.”In 2019, the Thorns averaged over 20,000 fans. Even at limited capacity Saturday, it will be the largest away crowd the club has seen yet.

New arrival: While Racing traveled back from North Carolina, defender Gemma Bonner made her journey from England, with the Manchester City transfer arriving to train with her new club this week. Bonner, a defender with international caps, is expected to be available for selection immediately, aiding Racing in central defense.

Regular season debut: Having subbed on in the 86th minute for Emily Fox, forward Vanessa Kara made her NWSL regular-season debut against the Courage. Seven more Racing players are still awaiting their moment, with the list including goalkeepers Katie Lund and Shelby Money; defenders Julia Ashley, Gemma Bonner, Addisyn Merrick and Sinclaire Miramontez; as well as midfielder Noelle Higginson.