‘Inquisitive’ Fox poised to improve on Racing’s left side

Friday's Player of the Match, a defender, has been given the freedom to attack as well. 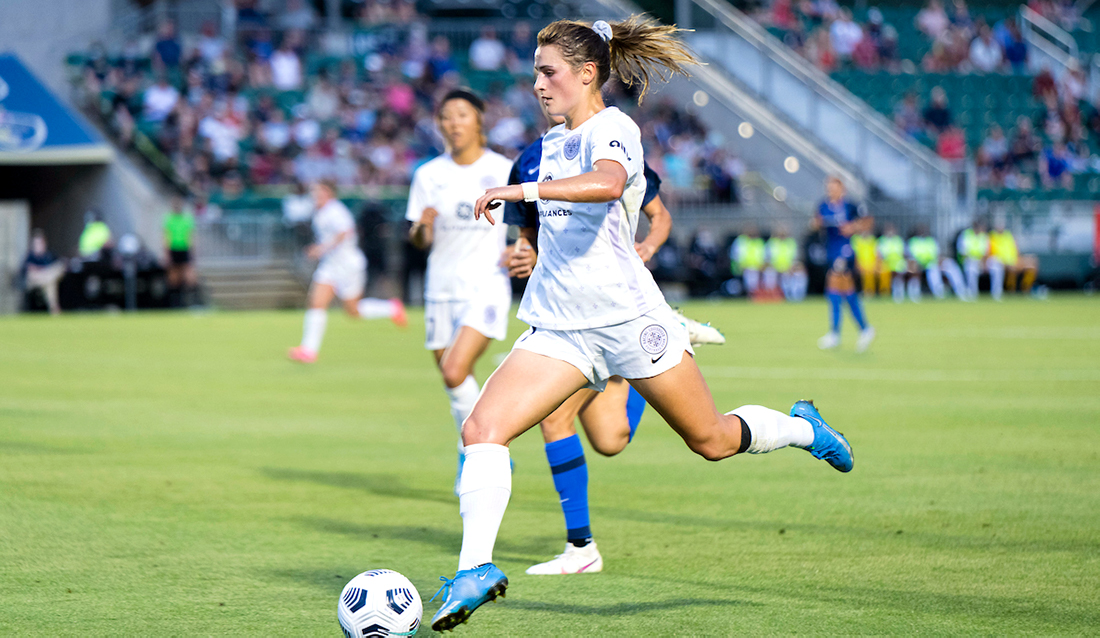 If Racing Louisville FC coach Christy Holly knows anything about his No. 1 NWSL Draft pick, it’s that Emily Fox will arrive armed with questions following a 5-0 defeat Friday at NC Courage.

The defender led Racing through the lopsided defeat in touches, passes and tackles despite this being the University of North Carolina graduate’s seventh professional game across all competitions.

Good enough? Probably not for Fox.

"She's brought a real good energy to the team,” Holly said. “She’s a fantastic young player and someone that's really inquisitive and likes to know how she can become a better player.”

Fox played collegiately for powerhouse UNC, a regular national title contender. When she heard her name called in January to open the NWSL Draft, the 22-year-old was in camp at the highest level training with the U.S. Women’s National Team.

Her role with Racing has been multifaceted, much more than is traditional for a left back. That’s a credit to Fox’s pace that allows her to rove up the wing and even into the center of the field.

Against the Courage, in what was still a 1-0 game, Fox swept in to recover possession in North Carolina’s half to set up a 42nd-minute chance. In the 56th minute, all Courage right back Merritt Mathias could do to stop a Fox run was take her down with the type of tackle that warranted a quick yellow card from the referee.

“Obviously Foxy’s a great player for us,” said forward and vice captain Savannah McCaskill, who highlighted the combinations Fox has been able to make with left winger Yuki Nagasato “being a threat getting shots off. She’s definitely a bright spot for us going forward.”

“I try to look at our opponents and see what’s the best thing to do,” Fox added. “Whether that’s me dropping more, doing more combo play, playing balls early or sitting higher. I think for me it’s just reading the game. I obviously want to make my teammates look good. I want to connect. I want to pass. So just trying to get a rhythm and help everyone else look good.”

While Fox hasn’t yet factored in a goal during the regular season, she made history on debut, sliding a long cross in behind the defense that led to Cece Kizer’s opening goal in the Challenge Cup against the Orlando Pride.

“She gives us a fantastic outlet on the left, but we also give her a bit of freedom to come in the central areas, too,” Holly said. “She’s been a fantastic acquisition. The exciting thing is we know there's so much more to her game.”

And Fox will be asking all the right questions to raise it.