Preview: What to watch for with Racing at NC Courage

Louisville kicks off a stretch against recent champions in North Carolina. 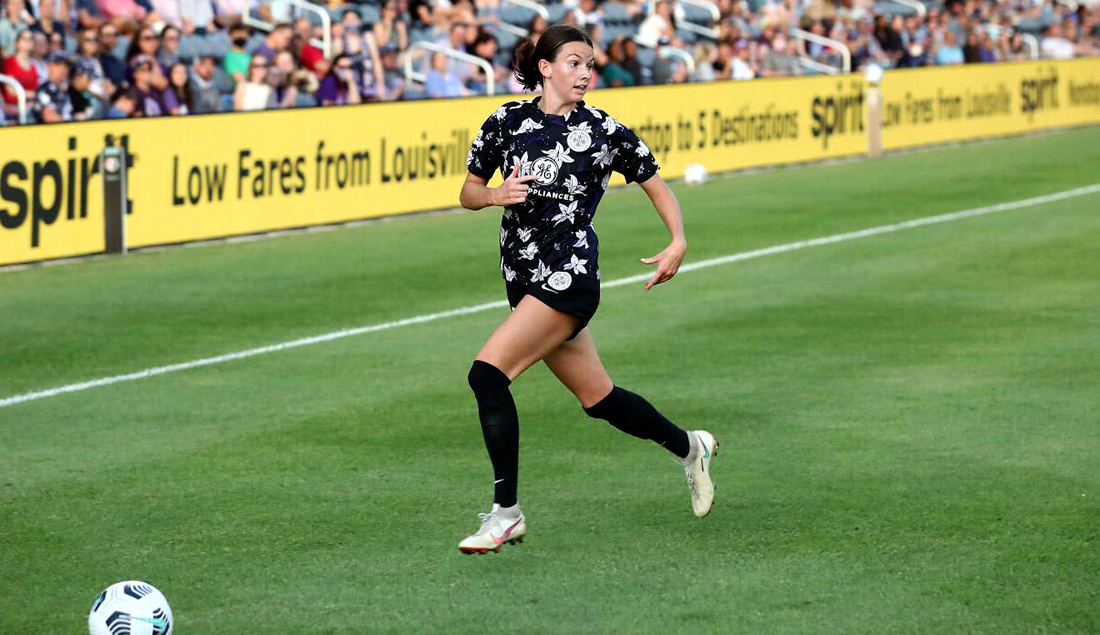 Racing Louisville FC is looking to build on the momentum of its first-ever win amid what is a decidedly difficult run of games. It begins with a trip to play the North Carolina Courage at 7 p.m. Friday.

Off a 2-0 victory last Friday over the Washington Spirit, Racing will see the Courage — NWSL champions in 2018 and 2019 — both this weekend and again on June 23 at Lynn Family Stadium. In between those matchups is a game against 2021 Challenge Cup winner Portland Thorns (June 5) and 2020 Challenge Cup champs Houston Dash (June 20).

Whereas Racing is preparing to face Portland and Houston for the first time, the Courage are a more familiar foe. The two first met during the Challenge Cup in a back-and-forth, 3-2 North Carolina victory at Lynn Family Stadium that featured a screamer of a goal by tournament MVP Debinha.

Since that game, Racing has assembled three straight clean sheets, coming into its own as an expansion side. However, the Courage have reason to improve as well given the recent return from Manchester City of midfielder Sam Mewis, who an ESPN panel earlier this year ranked the world’s No. 1 player.

"One of the things that we pride ourselves on is making sure that we are in the game throughout. Some games will go our way. Some games won’t go our way. It is about making sure that we are trying to put ourselves in situations where we can compete to the very end. There are various moments of transition in the game that I think can be telling. I think a lot of that comes down to their mentality and fitness. I think a lot of it is the mentality of the players and a reward for the hard work that they put in."

"North Carolina has probably been the best women’s club team in the world in the last couple of years. You don’t turn into that team overnight and then you add Sam Mewis. They are going to be extremely challenging. It is going to be a very difficult game. If we want to get something from that game, we need to put in our best performance. It is exciting. It is a challenge. It is on the road. It is different. Nothing has changed from what we have been doing. We are still focused on getting better."

Watch the match on Twitch with play by play from Joe Malfa and color commentary by Lori Lindsey.

Top of the table: Just as we all guessed, right? Week 2's results, bumping Racing’s total to four points,via a season-opening draw against Kansas City and victory over Washington, moved the ladies in lavender atop their nine rivals — and more established NWSL teams. The Orlando Pride, OL Reign and Gotham FC have also tallied four points apiece, with Louisville’s +2 goal differential breaking the tie.

Hometown heroics: En route to Racing’s first victory, forward Emina Ekic scored made her first pro goal a memorable one. The 61st-minute sub cut back and fired a looping shot to put Racing up 1-0 on Washington, then minutes later connected with Cece Kizer for an insurance goal. Ekic became the second player in NWSL history to register a club’s first regular season goal and assist, joining Steph Catley with the Orlando Pride.

Kizer stays hot: Kizer scored her third goal in lavender when she calmly placed a slipped pass from Ekic past Spirit goalkeeper Aubrey Bledsoe. It marked Kizer’s third goal in four games across all competitions at Lynn Family Stadium, as the forward also scored openers April 10 against the Orlando Pride and April 26 versus the Courage. Kizer’s pair of Challenge Cup goals were one off tournament MVP Debinha’s total.

Shutout streak: Racing has gone 275 minutes without conceding a goal, the longest active streak in the league, after goalkeeper and team captain Michelle Betos made 10 saves to preserve a shutout against Washington. Throughout the run of clean sheets, Racing has played with a back four of Erin Simon, Brooke Hendrix, Kaleigh Riehl and Emily Fox.

Leading the line: The No. 1 overall NWSL Draft pick Fox did some of her best work Friday as U.S. Women’s National Team coach Vlatko Andonovski scouted at Lynn Family Stadium. The University of North Carolina product put her only shot on target in the 38th minute, plus worked up and down the left side, nearly producing a first half chance for winger Yuki Nagasato on a ball into the box with just a bit too much pace.

Managerial matchup: Racing coach Christy Holly has faced off against Courage head coach Paul Riley five times. During those meetings, Holly posted a 1-3 record against Riley while leading Sky Blue FC, now known as NJ/NY Gotham FC. Two of the defeats came prior to the Courage relocating from Buffalo, New York, as the Western New York Flash to their current base in Cary, N.C.

Carolina connections: Five of Racing’s 22 rostered players have connections to North Carolina. Both defender Addisyn Merrick and midfielder Lauren Milliet played for the Courage before they were selected by Racing during the 2020 NWSL Expansion Draft. Recent signing Sinclaire Miramontez was also originally drafted by the Courage. Additionally Julia Ashley, Emily Fox and Taylor Otto all played collegiately at nearby UNC.

Called up: Forward Cheyna Matthews, training toward her Racing debut after the birth of her second child in December, has been named to the Jamaican Women’s National Team’s preliminary roster for next month’s Summer Series of games, which includes a matchup against a USWNT preparing for the Olympics. The Reggae Girlz first play Nigeria at 5:30 p.m. on June 10 before meeting the USWNT at 10 p.m. June 13. Both games are at Houston’s BBVA Stadium and will air on FS1.

New addition: Before Racing’s victory against the Spirit, the club signed defender Sinclaire Miramontez out of a successful trial. Miramontez, a native of Lenexa, Kan., attended the University of Nebraska until she was selected by the North Carolina Courage in the 2020 NWSL College Draft. With the Courage, Miramontez made one appearance in the 2020 Fall Series. She’s viewed as a replacement for midfielder Taylor Otto, who will miss time with a knee injury.