Betos serves as Racing's backbone knowing 'the journey we're on'

The goalkeeper made double-digit saves to preserve the club's latest shutout. 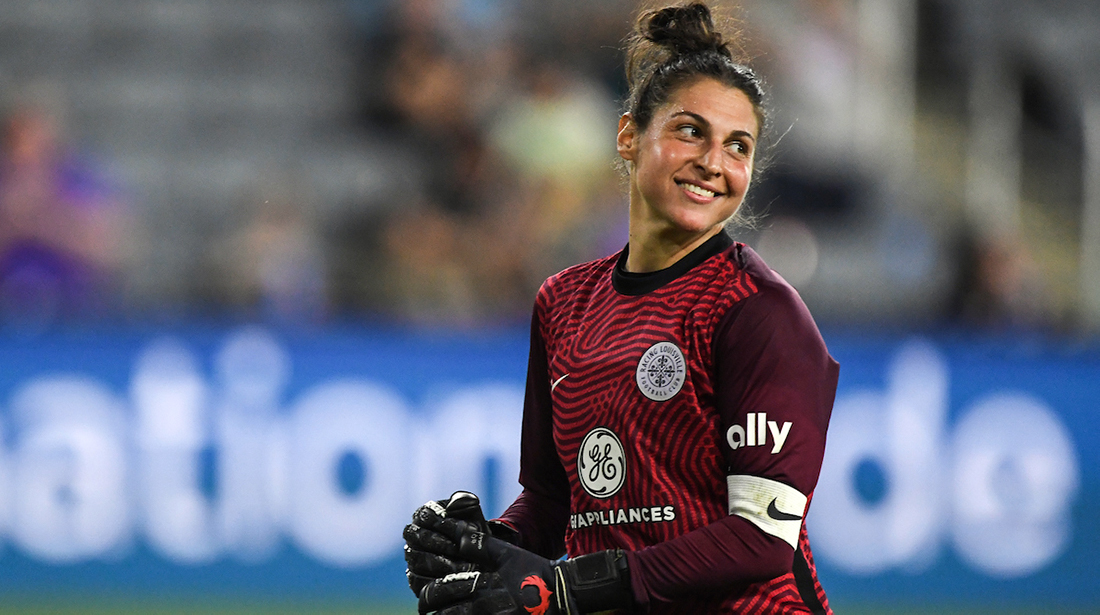 Racing Louisville FC, on a run of multiple clean sheets that has the expansion club atop the NWSL table after two weeks, has leaned on different pieces of its defense for the shutouts.

However, says coach Christy Holly, “We know that Michelle is the one we can always rely on.”

That’s is in reference to goalkeeper Michelle Betos, also the club’s captain who weathered a storm of 29 total Washington Spirit shots last Friday. The veteran between the posts tallied 10 saves to keep Washington off the board — and bide some time for her club’s equally young offense to establish itself.

“I think anytime you’re playing a team like that you know they’re going to be dangerous on the attack,” Betos said. “They have so many forces, and we know we have to weather their storm. As the defensive line and as a goalkeeper, all we’re thinking about is, ‘Can we keep this game winnable? Can we keep them in the game? Can we trust our forwards?’”

Betos had numbered 6 saves by the 76th minute, when rookie Emina Ekic cut in toward the box and curled in a game-winning shot against the Spirit. Five minutes later, Cece Kizer handled a cross from Ekic with aplomb and finished what was Racing’s second goal in a 2-0 victory, the franchise’s first win.

“We know we have good goal scorers, so how long can we keep them out so that they can get one chance, they can get two chances?” Betos asked. “And that’s what happens. It’s moment by moment and thinking about how we can keep this winnable.”

Just after the goals poured in, Betos’ name flashed up on the Lynn Family Stadium video board. She had been voted player of the game, then went on to turn away 4 more Spirit shots in the game’s waning minutes.

A 33-year-old from Queens, N.Y., is the most senior member of Racing’s inaugural roster, selected by Holly with purpose out of the 2020 NWSL Expansion Draft from OL Reign. Betos has played in multiple professional leagues having seen women’s soccer explode in recent years, including a 2015 season in which she was named the NWSL Goalkeeper of the Year.

“We are very excited for her to get the recognition that she deserves,” Holly said after Friday’s game. “… It is also her presence on the field that is very important, her leadership and her understanding of the journey we’re on.”

Three clean sheets for Racing, dating back to the preseason Challenge Cup tournament, followed the club’s first three games in which it conceded a goal after the 80th minute. Betos credited the arrival of goalkeepers coach Sergio Gonzalez late in preseason — “he does a lot on the defensive side tactically” — and a team mentality to defend front to back, including forwards.

“He is one of my favorite coaches I have ever played for,” Betos said, “and the first thing he said was, ‘Wow, I really like watching your team play. You can tell they’re going to work. They’re committed to what you guys are doing. They’re not going to stop fighting.’

“That’s what I want him to say. I think we have a lot of work to do. We want to be better than we were (Friday). We have a trajectory, but at the end of the day if we’re working, fighting and defending together then that’s something to be proud of.”