Costello: What we learned from Racing's win over Washington

Thoughts on a third clean sheet, plus who stood out when the USWNT boss watching. 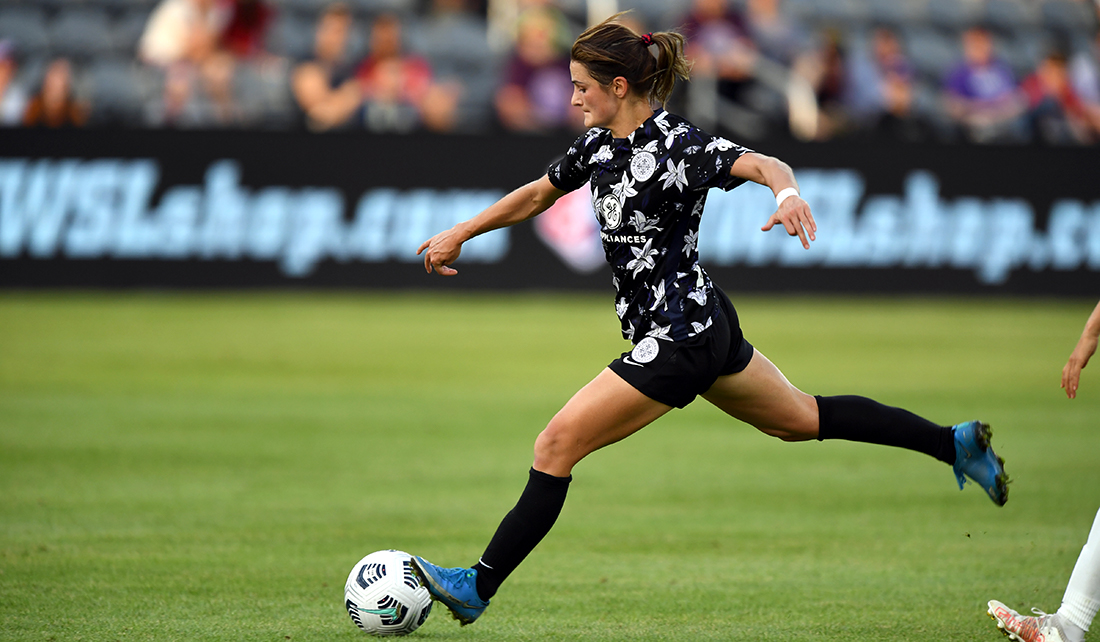 On Friday night, Racing Louisville FC put its first win in the club record books, beating the Washington Spirit by a 2-0 score after losing to the same side on a late goal in the NWSL Challenge Cup. Against a team touting names like Ashley Hatch, Ashley Sanchez and Trinity Rodman, Louisville continued showing supporters — and the league — that it can not only compete but win as a 2021 expansion team.

Fox shines at the right time

A big name in Lynn Family Stadium wasn’t a player or coach from either team. Rather, United States Women’s National Team head coach Vlatko Andonovski was in attendance for the Racing victory.

One player he knows well is fullback Emily Fox. While Fox didn’t make the SheBelieves Cup or April European friendly roster for the World Cup champions, her first half may have Andonovski thinking about including her for future competitions.

The 2021 NWSL Draft’s No. 1 overall pick shined for Racing. Fox not only took care of her role defending the left sideline, but she wreaked havoc on the Washington midfield. Washington stayed pinned into its defensive final third for much of the first half. When the Spirit did attempt a pass into the left side of the midfield, Fox was there more often than not.

One example came midway through the first half. Off of an interception, Fox slotted a pass into the box but just past forward Yuki Nagasato. In the 38th minute, she added a shot on goal from distance, causing Washington Spirit goalkeeper Aubrey Bledsoe dive to stop it.

Fox is making her mark in matches, and it’s only a matter of time before she’s not only scoring and assisting on more goals, but swapping out her lavender for red, white and blue.

As the Challenge Cup gets smaller in the rearview mirror, so are Louisville’s late defensive lapses. Washington got into areas where they could get chances, taking 29 shots overall, but the Racing defense and goalkeeper Michelle Betos made nothing easy.

Team defense was on full display, with any player in the area jumping in front of shots, making sure Washington didn’t capitalize. In those 29 chances, 23 were on target but Louisville players got in front of 13 to block. Betos saved the other 10.

“The team’s working,” said Betos. “We pride ourselves from front to back on defensive effort.”

In the first half, Racing did well in shifting its defensive shape to match the Washington offense, but in the second half, the Spirit had much of the momentum in moving forward. Of their blocks, nine came in the final 45 minutes. Racing didn’t break. After their first three matches of 2021, in which they gave up six goals, they’ve kept all opponents out of the net.

Patience is how they’re getting shots stopped. On Spirit attacks, Louisville players aren’t making the mistake of rushing out of position to try to stop a run. Instead, they’re keeping defensive shape and going to the ground to stop shots. It’s a sign of a team growing in confidence.

The source of that confidence is strong support behind the backline. Racing had it in droves on Friday night with Betos’ double-digit save performance. To head coach Christy Holly, her performance all goes back to the team as a whole.

“Quite frankly, every clean sheet is a team clean sheet, top to bottom,” said Holly. “Sometimes it is different players that we are relying upon. We know that Michelle is the one we can always rely on.”

Forward and Louisville native Emina Ekic started all four Challenge Cup matches. Even though she’s a rookie, she showed why she deserved those starts. It didn’t result in goals or assists, but Ekic’s movement, vision and finding spots to shoot made it clear that she wasn’t selected fifth overall in the NWSL Draft just because she’s a hometown kid.

Since the regular season started, Ekic has moved to the bench in favor of fellow forward Katie McClure. She came in against Kansas City NWSL and played well as a sub, but on Friday Ekic shifted from promise to performance. In the 76th minute, she did what Holly and teammates knew she’s capable of: scoring big goals.

“We have seen that week in and week out from Emina,” said Holly.  “It is not terribly surprising once we saw her in that position. We see her continually creating that and we are very proud of what she has done.”

Ekic cut through the Washington defense and, after a slightly strong touch, she took a shot on the run, burying it past Washington’s Bledsoe. Taking shots is what Holly has stressed for weeks, and this is why. For Ekic, her first career goal brought up a lot.

“I was relieved and excited and hyped and borderline in tears,” said Ekic. “It was a rush of so many emotions, but it was an amazing feeling.”

She was only getting started, too. Just five minutes later, Ekic took advantage of a Spirit team that was loading their offensive half with a three-on-one Louisville break. The goal scorer became the distributor with a pass to forward Cece Kizer, who settled with an excellent first touch, scored on her second and put the match out of reach.

While Ekic will work to make performances like that commonplace, she’s still only 22 and poised to grow stronger. Having gone toe to toe against Orlando Pride’s Marta in her debut, then getting past a U.S. international like Emily Sonnett in Racing’s first victory is only the beginning.