The hometown hero scored a winner in the club's first-ever victory. 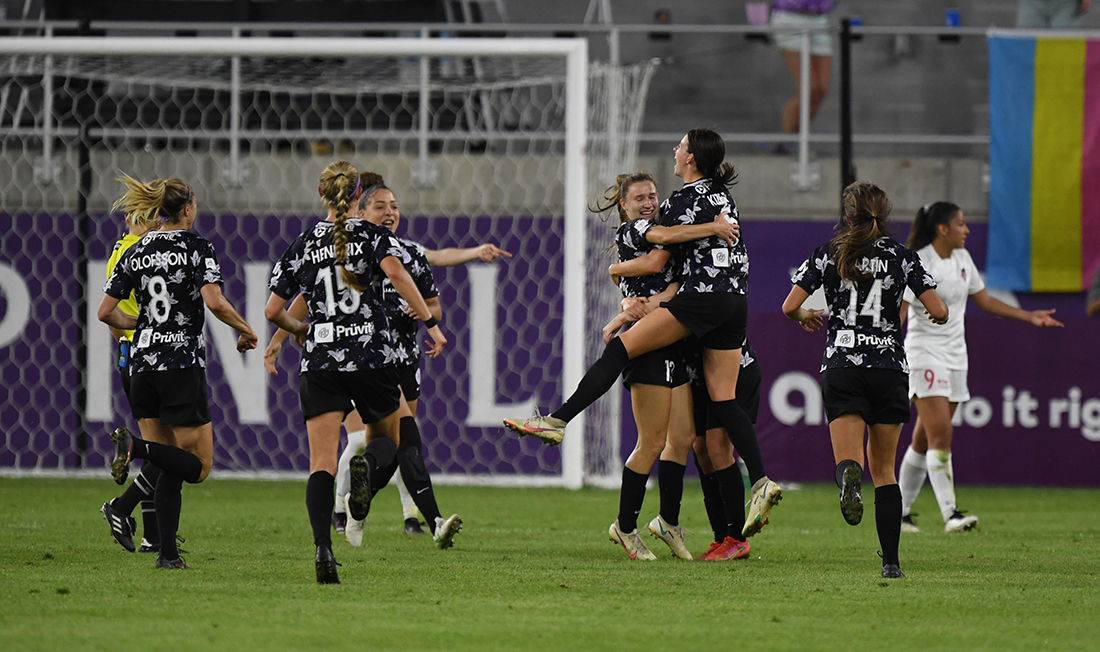 Emina Ekic walked into Lynn Family Stadium on Friday night donning a shirt decorated with her hometown’s greatest athlete, Muhammad Ali. And then hours later, Ekic wrote herself into some Louisville sports lore of her own.

The rookie — born and raised here — curled in a game winner before assisting on Racing’s second goal in a historic, 2-0 victory over the Washington Spirit. The result marked the NWSL expansion side’s first win and came in front of 6,011 fans at Lynn Family Stadium.

“It was a big moment,” said coach Christy Holly. “It was a big release for the players. We talk about going into games with proactive confidence. Because we are so young, you can feel tentative about feeling good and believing what you can do. You sometimes wait for sometimes good to happen in order to appreciate what they can do.

A University of Louisville graduate, Ekic was named the Atlantic Coast Conference’s Offensive Player of the Year last fall before declaring for the 2021 NWSL Draft. As timing would have it, Racing selected her No. 5 overall.

Ekic said there were pros and cons to that.

"Being here, there were probably some more distractions and more of, ’This is my city and I have something to prove’ — just carrying that weight sometimes can get you," she said. "Obviously, I didn’t have to move. I didn’t have to adjust to a new environment. I have the support of the city, my family and friends. It is just awesome to play in front of them. Having them here in the stadium is incredible.

"This is where I wanted to be, and I am so glad I ended up here.”

Ekic, who started multiple games during the preseason Challenge Cup tournament, played the role of super sub on Friday, coming on for fellow forward Katie McClure in the 61st minute. It certainly didn’t take her long to make an impact.

In the 75th minute, Savannah McCaskill played Ekic in behind down the right side. Ekic, always quick off the dribble, cut back in toward the goal and placed a looping shot just wide of a defender. It hit the back of the net, and the celebration was on at Lynn Family Stadium.

"It was so loud but quiet at the same time," Ekic said. "...I could not hear anything. I was just in the moment. It was awesome. Our fans were incredible.”

Racing doubled its lead in the 81st minute, again with some help from Ekic. Lodging a counter, Ekic delivered a ball to the feet of Cece Kizer, who slotted her shot to Washington keeper Aubrey Bledsoe’s left.

After Ekic’s heroics, Racing salted away the closing minutes, improving to 1-0-1 overall and for the time moved atop the NWSL table two games into its inaugural regular season.

Kizer made the goal her third in four home Racing games across all competitions, while goalkeeper and team captain Michelle Betos preserved her side’s third clean sheet, making 10 saves en route to Woman of the Match honors.

“I think we’ve been so close so many times," Betos said. "It’s early on in the season, but to get a win against Washington and a win at home…there are no words. I was excited, but again, it’s moment to moment. It’s (about), how do we stay in this game and how do we keep them in this game, because we knew Washington was so dangerous."

Ekic’s goal came against the run of play, as Washington added U.S. Women’s National Teamers such as defenders Kelley O’Hara and Emily Sonnett since the club’s last met in the Challenge Cup — then a 1-0 Spirit victory on a stoppage-time goal.

Washington out-shot host Racing 29-18 and held 61% of the game’s possession. With USWNT coach Vlatko Andonovski on hand to scout — and who knows how bright her future might be — Ekic managed to turn the tables for her hometown club.

Woman of the Match: Michelle Betos