Saturday's Woman of the Match was all over the field in a forward's role. 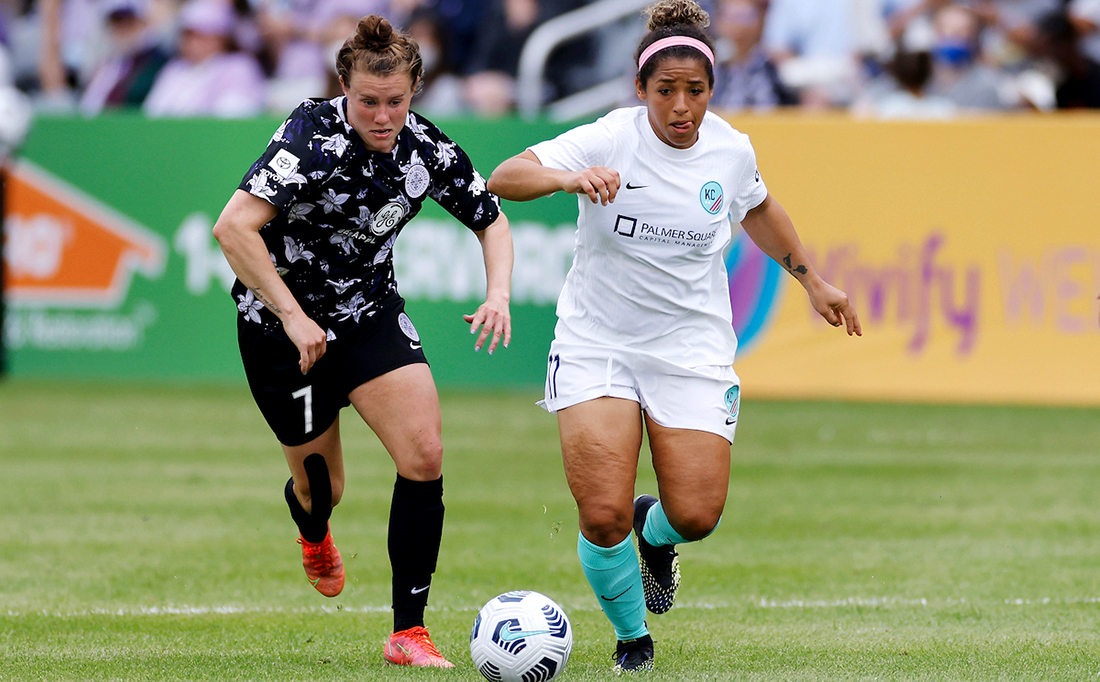 To simply refer to Savannah McCaskill as a forward, her listed position on the Racing Louisville FC roster, discounts a crucial role carved out so far by the club’s vice captain in the middle of the field.

Take for instance the sort of defensive moments that seem to incite panic in an opposing attacker. McCaskill will often eye a player on the ball, point her tightly bunned hair in that direction and charge.

The efforts amounted to two tackles in Saturday’s season-opening scoreless draw with Kansas City. But McCaskill’s pressing tactics have also forced numerous errant passes and turnovers to get her own side rolling on the counter.

“I am more of a 10 and at times I’m going to have to drop in and defend and do some of the dirty work,” said McCaskill, who arrived to Racing last fall via a trade with the Chicago Red Stars. “I do have to cover at times, and I think that’s just kind of us as a team. We kind of have to be able to cover each other’s backs.

“…Whether it’s bombing forward or making an 80-yard recovery run, I’m just trying to help us win it at the end of the day.”

Into first half stoppage time, she dribbled to the end line, feinted a move away from it and deftly beat the opposing defender with a quick turn back toward the goal. McCaskill fed a pass to Cece Kizer, whose one-touch try soared over the cross bar.

Then in the second half, McCaskill pulled a 60th-minute shot from distance that appeared to graze top netting, also hovering just above the bar.

“Savannah has been exceptional for our team,” said Racing’s head coach, Christy Holly. “I think this has been a big chance for her to be the Savannah McCaskill that we think is in her locker.”

McCaskill, selected second overall in the 2018 NWSL Draft out of South Carolina, also earned multiple U.S. Women’s National Team caps as her pro career began that year. Eventually traded from the former Sky Blue FC to the Red Stars, she found herself among many other international talents.

“Sav has had a tough time in the NWSL,” Holly said. “We really want her to express herself going forward and use her intensity and aggression. She has been fantastically important for us. She has been a wonderful leader within the team.

“We think there is a whole lot more in her locker. You can see what she has been working on day in and day out on practice field and try to translate that onto the field in a consistent basis.”

With ambitions of getting back into the USWNT player pool, McCaskill could well draw attention if she continues at this pace. The 24-year-old tried a team-high eight crosses Saturday, including one in the 39th minute that nearly bounced in for an own goal off a Kansas City defender.

“You see her leadership through her work rate, her attitude and her work ethic,” said Racing defender Erin Simon. “She’s up and down for 90-plus minutes straight and giving her all on both sides of the ball. She’s attacking and so defensive for us in tracking those runs back and winning those balls for us, but also creating in the attack. She’s such a vital person and player for us on this team.”

"Just to be able to represent this city and this group of fans and this team is amazing,” McCaskill added. “I hope going forward we can start getting some wins, but I hope that the fans and everyone that’s watching us knows we’re not just going to be another expansion team.