Costello: What we learned from Racing vs. Kansas City

It was a second straight clean sheet but a different sort of shutout for the club. 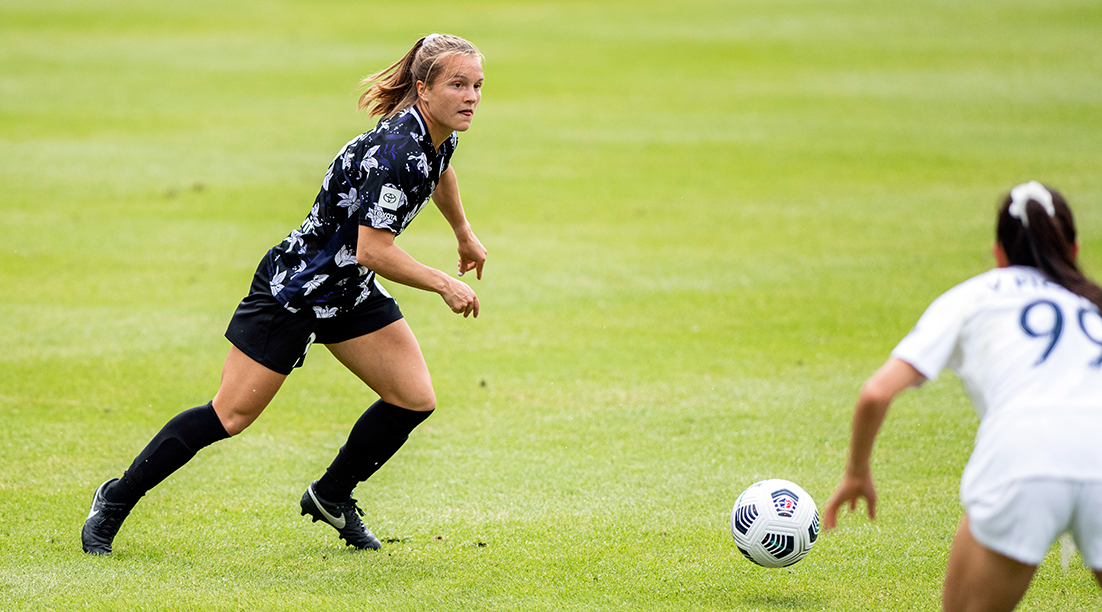 For an expansion team, every game is the opportunity to build team history. While the NWSL Challenge Cup brought moments of excitement for Racing Louisville FC, coach Christy Holly’s side wants to turn moments into full match performances. On Saturday, the club marked its first clean sheet when facing some talented offensive weapons from visiting Kansas City in its season debut.

Here’s what we learned from the 0-0 draw at Lynn Family Stadium.

For the second consecutive match, Louisville didn’t concede a goal. Against NJ/NY Gotham FC in the Challenge Cup, goalkeeper Michelle Betos stopped multiple shots in key moments, to secure a positive result. In Saturday’s NWSL regular season debut, Betos had a big save in the second minute, but it was the defensive back line and midfield that combined to make the captain’s afternoon easier.

“To try to limit a team like that, and keep a clean sheet but really to limit to smaller chances is something to take away from this,” said coach Christy Holly. Louisville kept U.S. international Amy Rodriguez to two shots on target. Mallory Weber, who showed the league in its final Challenge Cup match that she can score from anywhere, didn’t land a shot on target.

Louisville accomplished this by keeping a defensive shape, pressuring Kansas City throughout the midfield and getting players in front of shots. Racing blocked eight shots and out-tackled Kansas City 17-14. Most shots Kansas City tried were in poor areas or had a Louisville player influencing its trajectory.

A clean sheet isn’t as exciting as a big goal and flashing stadium lights, but it’s the sign of a team with strong communication — one that’s growing as a unit and can expect to get stronger once Addisyn Merrick returns from injury and Gemma Bonner joins the club following her transfer from Manchester City.

The goals will come

For the last three weeks, Holly wanted his team to start taking more chances on offense. Instead of waiting for the perfect moment or a wide-open teammate, he preferred shots thrown on net. That’s. Because when the ball gets to bouncing around the penalty area, good things can happen.

On Saturday, there weren’t any goals scored, but Louisville got more crosses into the box. Those chances could soon turn into goals.

“We need to be a little bit braver and put ourselves in positions where we can actually score,” said Holly. “We have to take more responsibility as an individual and as a teammate to step up and let the shot go.”

Louisville took 13 shots on Saturday, more than its Challenge Cup-high of 11 in the Gotham FC game. Clearly, this team is listening to Holly.

Midfielder Lauren Milliet had the one shot on goal, in the 36th minute, when a deflected pass found her feet outside of the penalty area. A low shot with pace found its way through a congested box of players but was saved by KC’s Nicole Barnhart. For vice-captain and midfielder Savannah McCaskill, its about keeping the chances coming.

McCaskill does it all

While listed as a forward on the team sheet, she tends to be everywhere on the field. On Saturday, McCaskill played her position of a forward/winger with the creation of chances and taking shots.

When she wasn’t helping create, she was making life hard for Kansas City. Looking at the stats and seeing only two tackles next to her name is deceptive when trying to formulate how strong she is on defense. McCaskill bolts towards the ball, regardless of where it’s at on the field. If she’s in the area, she isn’t sitting back and waiting for backup. It’s all part of her mentality as a player.

“I do have to cover at times, and I think that’s just kind of us as a team,” said McCaskill. “All of us need to be able to cover each other’s backs, and sometimes I’m willing to do the dirty work. Take the foul, take the card — whatever it happens to be to help us stop their attack.”

She did receive a yellow in the match, but that was to help the defense. Kansas City was about to march into the box uncontested, and McCaskill opted for the professional foul. The subsequent free kick missed the target and Louisville stayed on level.

“We really want to allow her to express herself going forward and use her intensity and use her aggression defensively,” said Holly. “She’s been fantastically important for us. She’s been a wonderful leader within the team.”

That leadership is evident on the field. When players are down for injury or when there’s a break in the action, McCaskill is talking to teammates about positioning and tactics. While expansion teams have the fallback of lowering expectations, that’s not in the language in the locker room.

“We’re here to really establish ourselves as one of the top teams in this league,” said McCaskill.

Louisville’s next opportunity to prove its place is Friday. The club welcomes Trinity Rodman, Kelley O’Hara and the Washington Spirit to Lynn Family Stadium for a 7:30 p.m. ET kickoff.