She holds an NCAA record for minutes played as a result. 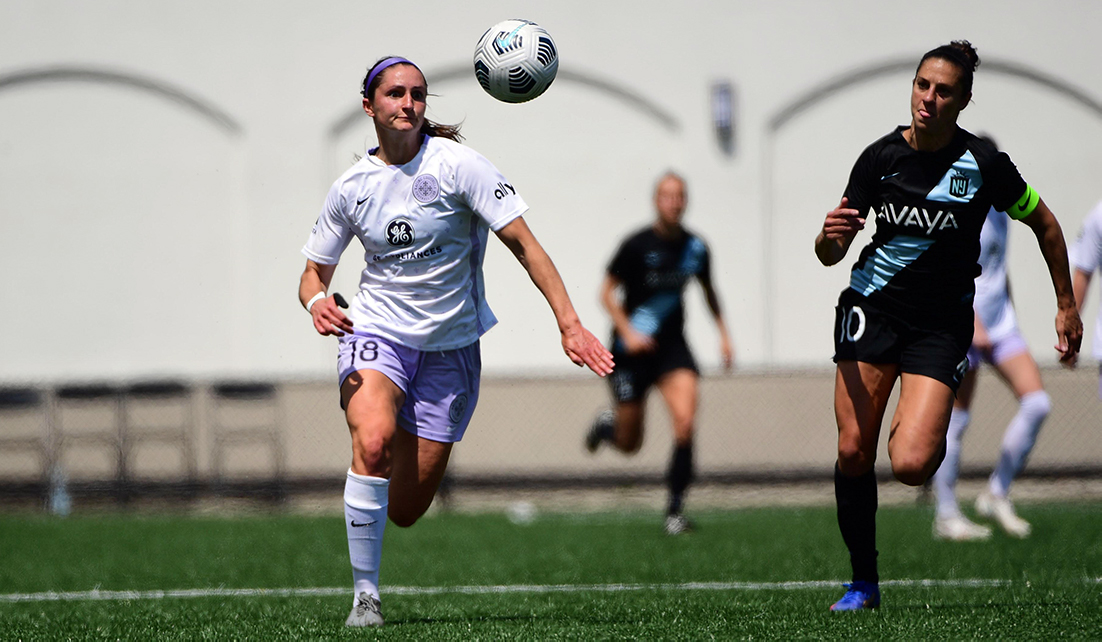 During her collegiate career, Racing Louisville FC defender Kaleigh Riehl cracked the code on how to get on and then stay on the field as she set the NCAA record for minutes as a field player.

Riehl, who went the distance in Racing’s final two Challenge Cup games, could be trending toward something similar in Louisville as the club comes up on its regular season opener at 5 p.m. Saturday, hosting Kansas City at Lynn Family Stadium.

“I didn’t even know that was a stat,” Riehl said, looking back to her college days at Penn State, in which she logged 8,847 minutes on the pitch. “I don’t play for stats. So, it was not anything that was a goal of mine, but it was pretty cool to achieve.”

Along the way, Riehl also made a number of appearances with the U.S. U-23 Women’s National Team, among other call ups in red white and blue. The former Sky Blue FC — now NJ/NY Gotham FC — selected Riehl 11th overall in the 2020 NWSL Draft to mark the beginning of her pro career.

Riehl partially credits luck for her ability to stay fit but also believes select habits have kept her competing at a high level.

“Nutrition, hydration, recovery and doing all of the little things is what ultimately keeps you out on the field,” she said. “I think you just put yourself in the best situation to stay healthy.  Of course, things will happen, but I do think that is important to always have.”

Riehl noted that she also receives treatment every day it’s offered, joking that Racing’s staff “is probably like ‘Oh, her again.’

“I am grateful that they are always in such a great mood, and they don’t think it is a burden when I am in there every day,” she added.

Whatever works for a center back whose presence will be crucial for Racing, a 2021 NWSL expansion side.

Going back to her freshman year at Penn State, Riehl logged 2,360 minutes played, the fourth-most in a single season in program history as Penn State went on to win a national title. The following year, Riehl redshirted as she traveled with the youth national team to compete in the 2016 U-20 World Cup in Papa New Guinea.

“It was incredible,” she said. “I loved that year, and  I am thankful for my college coaches for allowing me to have that experience.”

In her next three seasons with Penn State, Riehl consistently logged more than 2,100 minutes per year. As a senior, she surpassed current USWNT defender and captain Becky Sauerbrunn’s 8,523 minutes to set the NCAA record for minutes played by a field player.

“I didn’t even know beforehand,” Riehl said. “Then, our media person told me, and I was like ‘Oh, that’s really cool.’”

The more that you are on the ball and practicing in training both in a team environment and on your own, you gain confidence from that,” Riehl said. “You can believe in yourself when you spend so much time trying to perfect your craft.”

Selected from Sky Blue by Racing in the 2020 NWSL Expansion Draft, Riehl arrived to Louisville after a stint on loan to Paris FC, a member of France’s top division. Of course, the Virginia native found a way to tally more minutes during the NWSL’s offseason.

In her second appearance for Racing, Riehl contributed to the club’s first clean sheet, a scoreless draw May 2 with her former club, Gotham FC.

“It is big for us,” Riehl said afterward. “The last few games, we have given up a goal in the very end. Just being more focused and talking through those moments and making sure that we finish the game out with a clean sheet — it is great for us to keep it at zeros.”

Next, Riehl and the rest of Racing Louisville will look to carry that over to an inaugural 24-game regular season.