Costello: What we learned from Racing's draw at Gotham FC 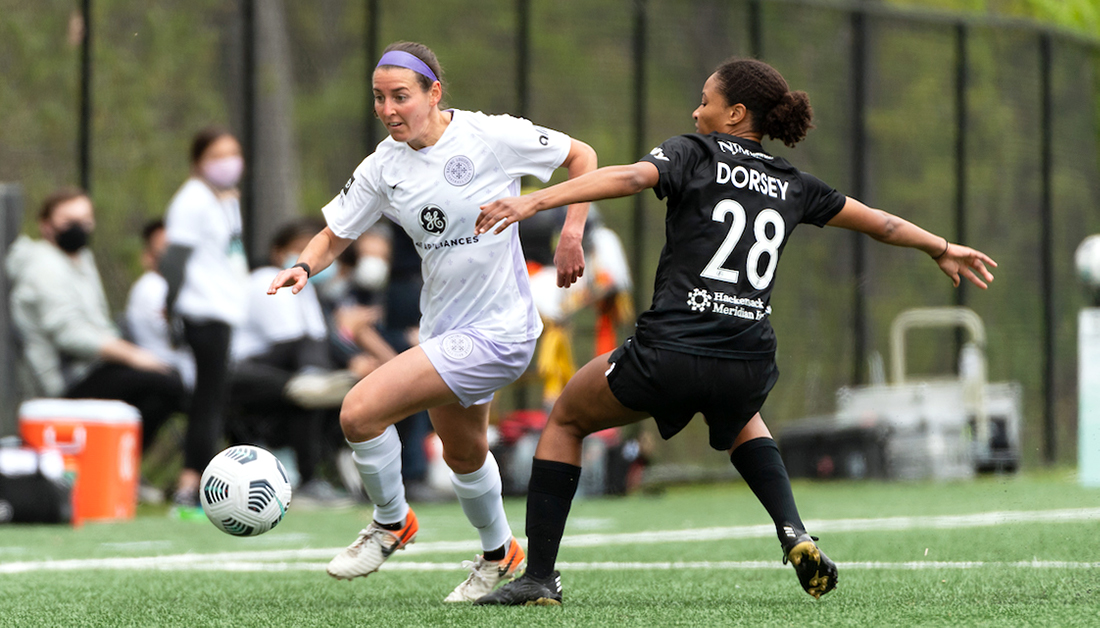 Racing Louisville FC’s final Challenge Cup outing didn’t carry tournament implications for the club, but Sunday’s game at NJ/NY Gotham FC presented a final opportunity to fine tune ahead of the regular season opener May 15. Here’s what we learned from the 0-0 draw.

This back line can slow a potent offense

In the first half, Carli Lloyd and Midge Purce did have opportunities on frame, but more often pressure from Racing’s back line forced them into lower quality chances. The Gotham forwards combined to shoot seven times but put only two tries on target. Purce plays wide, but has a tendency to move more centrally and get on goal. Racing met her move early in the match, and she didn’t go back to it.

Even though the defensive four received a blow with full back Emily Fox’s substitution for injury in the 56th minute, they held their composure late. Lloyd, who has numbered 301 U.S. Women’s National Team caps, took her final shot in the 95th minute, one that caromed off the head of a Racing midfielder and secured the shutout.

“We were very organized at the back,” said Racing’s coach, Christy Holly. “The team was very structurally organized and disciplined in their decision making defensively in the final third.” Defensive performances aren’t limited to players with defender next to their name on the team roster. They’re the first to say that the players in front of them played a big role.

“I think that really starts with our forward pressure and then making it predictable for us,” added defender Kaleigh Riehl. “They make our job so much easier when they do that.”

The forward pressure came in the form of blocking passes, with 11 of the team’s 17 interceptions claimed by midfielders and forwards.

Midfielder Lauren Milliet arguably shined the brightest defensively with four tackles, two blocked passes, a blocked shot and three interceptions. A couple of those interceptions came in dangerous attacking areas, where Milliet knew what the opposition was thinking even before it initiated a pass.

“She always puts so much effort in and an engine in there,” Riehl said. “She’s box to box the entire game. She’s always fighting and she’s scrappy.”

That growth is a sign of things to come. Milliet worked hard in the offseason to become the player that she is in 2021.

“I had the tendency last year to play my back to the goal,” Milliet said. “Coming through this year I was really working on getting my body open so I could play quickly through the lines.”

She accomplished this goal against Gotham.

Louisville has more than just leadership in goal

Gotham FC’s draw was enough to earn a spot in Saturday’s Challenge Cup final versus Portland Thorns FC. But Racing didn’t make it easy to get through, especially goalkeeper Michelle Betos.

Louisville’s captain stopped all four shots that came her way, including a 62nd-minute chance that quickly. The biggest being her final one, in the 62nd minute seconds after Riehl came up with a block about five yards from goal. The rebound went to Gotham FC defender Caprice Dydasco, and Betos followed with a fully-extended diving save to her left.

“Miche is rock-solid back there,” Milliet said. “It’s honestly super nice to have such a high quality, veteran back there, and she’s a freaking dynamo at saving and she’s a great voice for us.”

The performance — Betos’ first clean sheet for Racing — followed a performance last week against NC Courage that landed her the NWSL’s Save of the Week.

Betos making big saves has to instill confidence in a young side. While she has had goals get into her net during the Challenge Cup, Betos still puts herself into opportunities to make saves. This isn’t a goalkeeper who watches a ball go past herself. She plays with the same tenacity and energy as the side in front of her, and her impact stretches outside of the soccer pitch too.

“She’s top notch,” Milliet said. “We can learn a lot from her — leadership-wise, soccer-wise — and she’s a great person as well.”

Betos’ performances only figure to improve as Racing inserts more key pieces into its defense, such as injured center back Addisyn Merrick and the English veteran Gemma Bonner, who recently signed from Manchester City.

Sure, the Challenge Cup served as a proper NWSL competition. A trophy will be handed out this weekend to either Portland or Gotham FC. But this also served the purpose of four preseason games for the expansion side Racing ahead of its 24-game campaign that opens at Lynn Family Stadium.

Racing’s offensive output and possession didn’t meet Holly’s expectations Sunday, but the club influenced the outcome by adjusting on the fly. Gotham FC’s attack featured far less creativity thanks to changes made by Racing. This ability to learn and grow at a face pace raises Racing’s ceiling in 2021.

The roster also remains a work in progress. Bonner will join once she obtains a visa, and Holly has teased other signings. Those moves may take time to negotiate, but the group on the field has already showed it can go toe to toe with anyone in the league.

The strength in mentality, once paired with stronger tactical play, moves Louisville out of the conversation of stereotypical expansion team and into a contender to make the NWSL’s expanded six-team playoffs.

“Trust ourselves and have confidence in ourselves,” is what Riehl said Racing will work on. “We hear that we’re a young team and all of this, but we can really compete with the best teams in this league and I think we have showed that. We need to be a little more consistent with that and truly believe ourselves.”