Preview: What to watch for with Racing Louisville at Gotham FC

In their final match of the Challenge Cup, Racing looks to play spoiler. 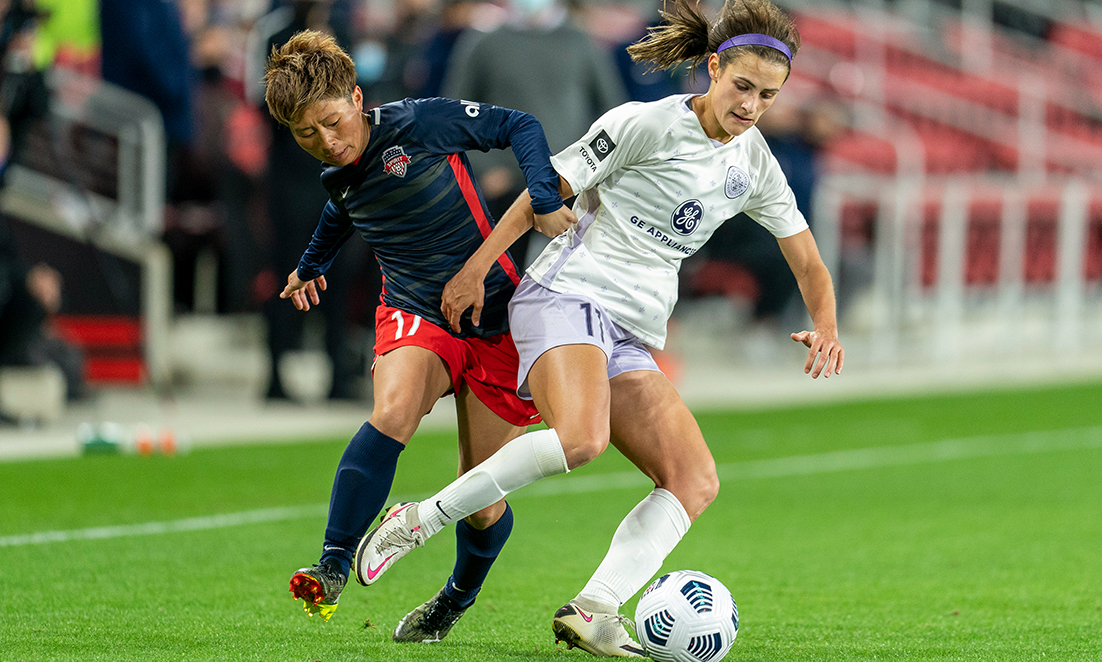 Racing Louisville FC is looking to end its first NWSL competition on a positive note with a trip to New Jersey, concluding a run through the preseason Challenge Cup tournament at NJ/NY Gotham FC.

The 24-game regular season is scheduled to start May 15, giving the expansion side one final chance to tune up for its inaugural campaign.

Thus far, Racing has earned a point from its Challenge Cup-opening draw with the Orlando Pride before dropping one-goal decisions to the Washington Spirit and North Carolina Courage. The club is mathematically eliminated from making the May 8 tournament final but can still gain plenty from Sunday’s game, namely its first-ever victory.

Building off its recent rebrand, the former Sky Blue FC finds itself at the top of the Challenge Cup’s East Division (pending Saturday night’s NC Courage-Orlando Pride result). Either way, Gotham FC will control its destiny going into this final group stage game.

Racing will meet Gotham at Montclair State University’s Soccer Park at Pittser Field with a limited number of fans in attendance. The game will also stream on Paramount+ in the U.S. and Twitch internationally.

“It is definitely a little bit different because of the Derby this weekend," with Racing making an early trip to New Jersey. "We got to train (Thursday) and it is an abbreviated week already with a game on a Monday. We trained (in New Jersey on Friday). You are on the back of travel. You are not able to get into that many tactical concepts that you want to employ during the game. A lot more of the work will be done theory-based through video. I think that is how we will maximize the time between various different meetings between the players.

"I can’t speak highly enough of every single player in this organization. Ultimately, we want to train and have good habits and have that transfer into our game performance."

Stream the match on Paramount+ and internationally on Twitch with play by play from Mike Watts and color commentary by Kalyn Kyle.

Know the Foe: Just before the Challenge Cup opened, Sky Blue FC announced it would be known as NJ/NY Gotham FC as part of a rebrand that appears to have energized the whole organization. Off the field, Gotham FC is enjoying publicity from new colors and kits. On it, the team has gone unbeaten with two wins and a draw.

Gotham is home to many well-known national team members, including forwards Carli Lloyd and Midge Purce, whose two goals are pacing her team in Challenge Cup play. This week, the club also acquired midfielder Allie Long, who joined the club in a trade from OL Reign.

Should Gotham FC advance, it would mark the franchise’s first final since winning the Women’s Professional Soccer playoffs in 2009.

Tri-State Connections: Racing’s links to Gotham FC don’t end with Holly. During the 2020 NWSL Expansion Draft, the club selected from Sky Blue FC defender Kaleigh Riehl. Additionally, forward Savannah McCaskill started her professional career in 2018 in New Jersey, where she made 26 appearances, scored three goals, and was an NWSL Rookie of the Year finalist before joining the Chicago Red Stars in June 2019.

Kizer Steps Up: Through her first three matches in lavender, forward Cece Kizer has tallied two goals an assist, with one apiece in Monday’s 3-2 defeat to the NC Courage. Before joining Racing through last year’s expansion draft, Kizer had made 22 NWSL appearances for the Houston Dash, coming on as a substitute in all but two of those. She has started at striker for Racing in its prior three Challenge Cup games.

Instant Impact: It took forward Jorian Baucom just one touch to impact Monday’s match against the Courage. After subbing on in the 74th minute for forwarding Yuki Nagasato, Baucom found the back of the net in the 75th minute, flicking in a cross from Kizer that equalized. It marked Baucom’s first NWSL goal and fifth professionally for a player who earned a contract out of a preseason trial.

Defensive Consistency: Freja Olofsson, a Swedish midfielder signed by Racing last December, was billed as a box-to-box presence. She has made herself known especially defensively early on for Racing. Against the Courage, Olofsson gained possession a game-high 13 times. And through Racing’s first three games, she’s the only player to gain possession 10 or more times each outing.

Save of the Week: Goalkeeper and captain Michelle Betos earned Racing’s first-ever on-the-field accolade when she won NWSL Save of the Week. Her kick-save to stop striker Lynn Williams of the North Carolina Courage from finding the back of the net. This marks Betos’ first individual accolade since she won Goalkeeper of the Year in 2015 when she was with Portland Thorns FC.

League Debutantes: By coming on in the 70th minute Monday, defender Julia Ashley became the eighth Racing player to make her NWSL debut during the Challenge Cup. Ashley, selected sixth overall in the 2019 NWSL Draft, played overseas that year before injuries held her out of competition in 2020.

Additionally, defender Kaleigh Riehl made her Racing debut when she found herself in the starting lineup Monday. Riehl made it to Louisville after two Challenge Cup appearances last year for Sky Blue before a loan spell with Paris FC in France’s top division.

Three players on Racing’s roster — goalkeepers Katie Lund and Shelby Money, along with midfielder Noelle Higginson — are awaiting their first minutes as pros.

Schedule’s Set: On Tuesday, the NWSL unveiled a 2021 regular season schedule consisting of 24 games — 12 home, 12 away — for Racing. The club will see each of the league’s other nine teams at least twice, hosting them all once or more. The season runs through this summer’s Olympics and concludes Oct. 31 with a trip to, coincidentally, Gotham FC. The top six advance to newly expanded playoffs calumniating with a championship game the weekend of Nov. 20.

Recent Additions: As Holly continues to build his roster, two recent developments have added to his arsenal. First, forward Cheyna Matthews joined training with Racing months removed from the birth of her second child. The same scenario played out in 2019, when she returned to represent Jamaica in the World Cup. Then on April 23, Racing announced the signing of Manchester City defender Gemma Bonner, who will join the club upon receiving her visa.\

• Michelle Betos is one appearance from making her 50th in NWSL regular season play.

• Savannah McCaskill is two goals away from her 10th across all NWSL competitions.

• Yuki Nagasato is two goals away from her 15th across all NWSL competitions.

• Erin Simon is one appearance from her 60th as a professional.