The forward has tallied two goals and an assist through three games. 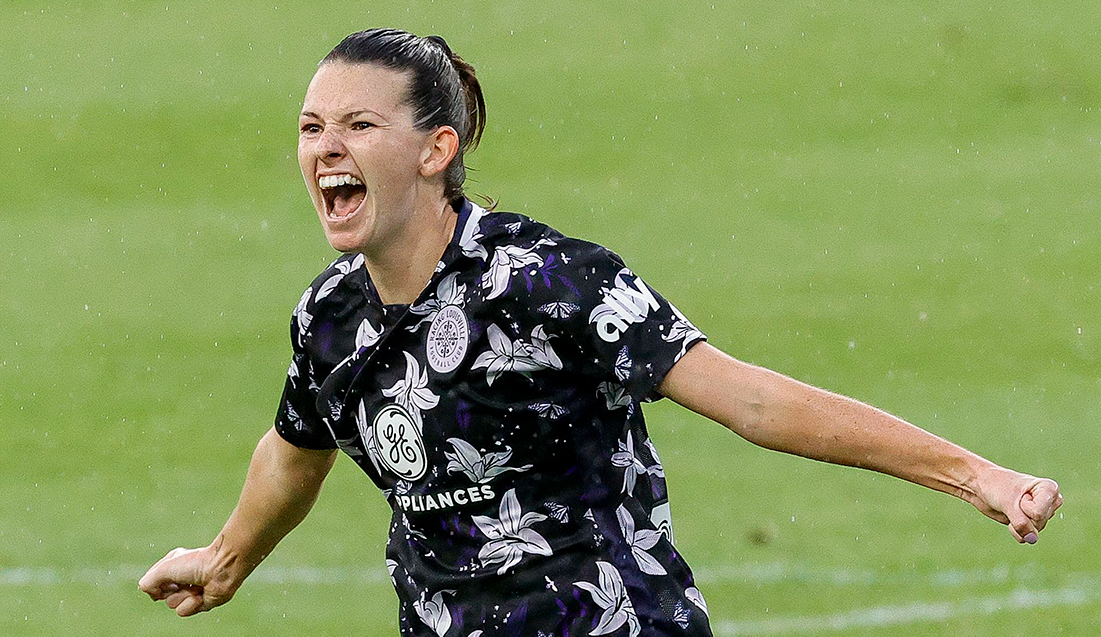 Going back to the summer of 2019, then as a national team replacement player for the Houston Dash, Jorian Baucom has seen Cece Kizer’s talent first hand.

As is the case for a number of Racing Louisville FC players, signing with an expansion club has allowed Kizer a larger platform to show it.

Having numbered two goals and an assist through three NWSL Challenge Cup games, the forward out of Ole Miss leads Racing in both statistical categories, adding one apiece earlier this week when Louisville played the North Carolina Courage to a 3-2 defeat at Lynn Family Stadium.

“She knew that she had a point to prove in coming here,” Baucom said of Kizer. “People look at her as a leader on and off the field. She comes in, she’s hungry for goals, and it’s clear as day in her play so far — being three games in — that she’s done what she came here to do.

But despite logging a number of minutes as a substitute, Kizer never broke into Houston’s lineup as a regular starter — not like he has as Racing’s center forward in all three of its games thus far.

“We love Cece,” said coach Christy Holly, who selected Kizer in the 2020 NWSL Expansion Draft. “We think she is a little bit of a hidden gem. I don’t know how hidden she is, but very underrated. There is definitely a lot of growth in her game ahead of her.

"She has such a fantastic attitude. She had her own injuries at the tail end of last season and the start of this season. There is no doubt in the quality that she has. The contributions that she has shown thus far are not surprising. I actually think there is more to Cece. We are looking forward to tapping into that.

“Very proud of her. Very excited for her.”

Amid a rainstorm, and with a rainbow beginning to form over the south goal at Lynn Family Stadium, Kizer got behind the Orlando Pride defense on April 10 to score Racing’s first-ever goal.

Back at Lynn Family Stadium on Monday, she also opened scoring against the Courage, directing a header in for a 24th-minute goal and capitalizing on a desire to be “more dynamic in the box.”

“Christy kept saying we need someone to step up and put the ball in the back of the net — and stop taking so many touches and hit the box because in this league it’s very hard to do,” Kizer said. “Players are going to be on top of you. That’s just coming from experience and watching film and learning throughout the season.

“We have the potential to score goals. We need to keep getting numbers in the box and finish our opportunities.”

Kizer did that once more, via an assist to Baucom, in the 75th minute Monday. Racing equalized when Kizer received possession out wide left, looked in the box and saw both Baucom and fellow forward Katie McClure.

“I figured one of them was going to put it in,” said Kizer, who saw Baucom flick her first NWSL goal past the Courage’s keeper.

While Racing went on to give up a game winner late, the expansion club played the Courage, a perennial league power, especially close.

“It’s a testament to our mentality,” Kizer said. “We just want to have this relentless mentality like North Carolina has really been known for. Obviously going up against of one of, if not the best team in the league, we wanted to come out and prove who were where.

“…I think that we proved a lot on the field, and we have a lot learn from it. We hope to carry this momentum that we have. We need to work on being more disciplined in the final minutes of the game.

"Again, having that relentless mentality in the box and finding goals and carrying ourselves high. We know we’re a good team and have potential. We’re young. We’re still getting experience, but we’re very excited for how this season has gone so far.”