Months after giving birth to her second child, the forward has returned to training. 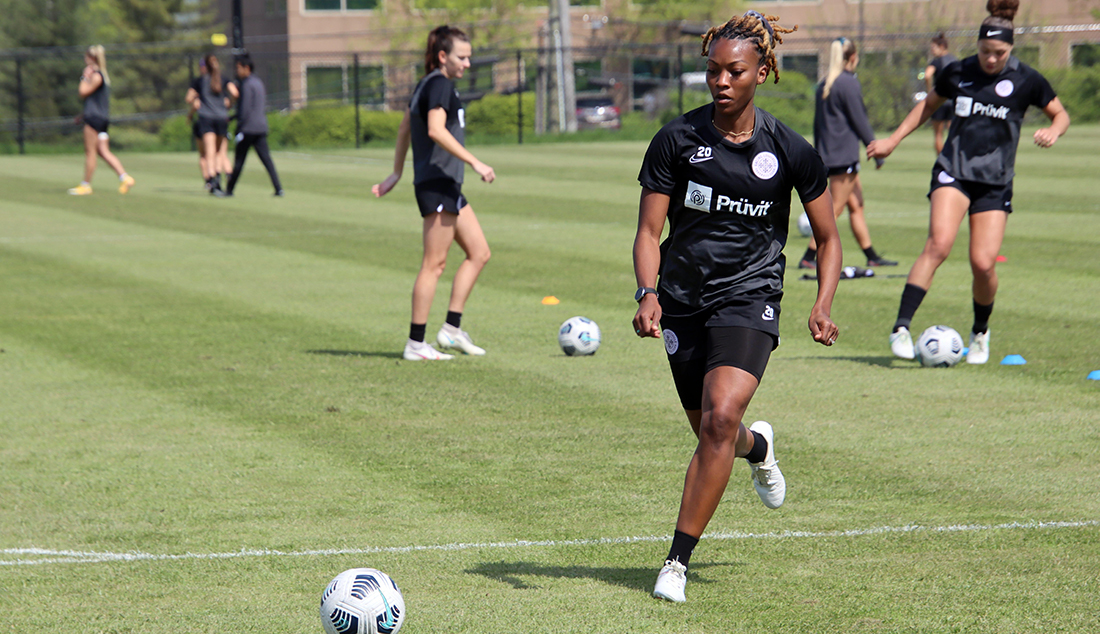 As Racing Louisville FC resumed training this week, it did so with a new member of the squad on hand.

Cheyna Matthews, who gave birth to her second child in December, returned to the pitch Tuesday as the 2021 NWSL expansion side continues its run through the Challenge Cup.

“I came in at a good time,” said Matthews, a forward, who joins after a draw with the Orlando Pride and loss to Washington Spirit. “The girls were rested after a long preseason. They had the first couple of days off that they had in a while, so I just snuck right in. I was able to get two good sessions coming back in and having everyone be fresh and seeing where I am.”

The Lynn, Mass, native’s NWSL playing rights came to Racing through the Re-Entry Wire last fall. Previously, Mathews had played the entirety of her professional career fo the Washington Spirit, for which she numbered 11 goals and 4 assists across 55 appearances.

Additionally, Matthews represented Jamaica in the 2019 World Cup, making a pair of starts just months after having her first child.

“We are delighted with Cheyna,” said head coach Christy Holly. “We know that she has put in a lot of work since having her second child. It is paying off very clearly in the early days of training. I think when we get a little more sharpness on her, she will be very impactful on the field.”

“A lot of people in the NWSL probably already know her,” Holly said. “She is quick. She is a tireless worker. She gives us that extra threat in behind. In the early days of training with us, I have been very impressed by her finishing and her clinical nature in front of goal.”

Off the field, Matthews’ energetic personality has allowed her to quickly work into a group that has been training since Feb. 2.

“The first thing I noticed was that we need a speaker in the locker room,” Matthews joked. “I said that I may have to take on the DJ role.”

While there’s no set timeline for Matthews to make her way into the lineup, Holly said she reported to training further ahead than anticipated.

“I told her that there is no pressure coming from our end,” the coach said. “We want to be very respectful of the layoff that she has had. But I have been pleasantly surprised, and I think she will be on the field and contributing sooner than I initially anticipated.”

“I keep reminding myself to be patient,” Matthews added. “It is nice to feel good, but then when fatigue starts coming in you want to watch for injuries being this new and this fresh.”