For the second straight game, Racing saw a 93rd-minute goal, but this one came for the other side. 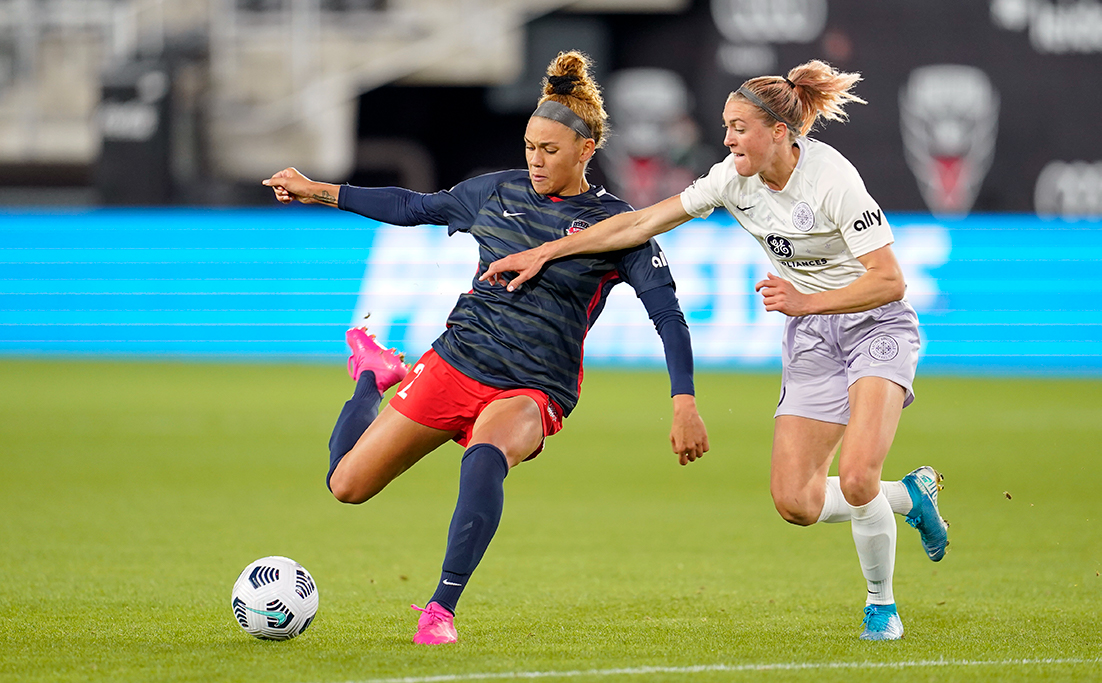 Racing Louisville FC wound up on the wrong end of a stoppage time goal Thursday night in a 1-0 defeat to the Washington Spirit at Audi Field.

In behind the visiting defense, the Spirit’s Trinity Rodman crossed to teammate Ashley Sanchez for the 93rd-minute game-winner. While Racing goalkeeper Michelle Betos managed a hand on the shot, she couldn’t completely stop momentum of the game’s only attempt to hit the back of the net.

This result followed a 2-2 draw for Louisville last Saturday against the Orlando Pride in its debut, when Racing used a 93rd-minute goal of its own to equalize.

“I’m obviously exceptionally disappointed,” said head coach Christy Holly. “You can’t afford to give away goals at the end of the game in the NWSL. If you continue to give teams opportunities, at the end of the game they are going to punish you. It’s a tough learning lesson for the team. We’ll take it on board and try to move forward.”

These preseason games — along with upcoming matchups with the North Carolina Courage (April 26) and NJ/NY Gotham FC (May 2) — are being played as part of the Challenge Cup tournament. Division winners advance to a May 8 final preceding the 24-game regular season.

“I think there’s always room for improvement," said midfielder Lauren MIlliet. "With Orlando, we took a couple of things, worked on some stuff in training although it was a short week and tried to implement them in this game. I think the same thing.

"We are a new team, and there’s all this chemistry that’s been building so I think each game is an opportunity for us to learn and grow. I think that’s what we’re trying to take from each game. Yes, the loss is disappointing, especially in stoppage time, but we can always learn from it."

Before conceding late, Racing had opened on the front foot Thursday, playing Washington even in a first half where Louisville native Emina Ekic took the best chance. She solo dribbled past a pair of defenders and rocketed a shot off her left foot in the 21st minute the Spirit’s goalkeeper turned away.

Out of the locker room, Racing’s Cece Kizer played Yuki Nagasato in for a one-on-one chance with the opposing keeper as well. The 49th-minute try slipped just wide right.

Another near miss from Racing came in the 85th minute when Katie McClure was taken down in the box, though it didn’t yield a penalty. And into stoppage time, Savannah McCaskill got a toe on a point-blank try that was also fended off.

In the end, Washington keeper Aubrey Bledsoe numbered four saves in securing a clean sheet as the Spirit’s offense kicked in while gearing up to its goal. The hosts, meanwhile, out-shot Racing 14-4 in the second half with Rodman, the 2021 NWSL Draft’s No. 2 overall pick, moved to a central striking position.

“I thought our first five, 10 minutes we put them on the back foot," McCaskill said. "In any game if you can score first and score early I think that kind of sets the tempo of the game and helps you get ahead of it. As that half wore on, we let them come back into the game a bit. We weren’t crisp. We have some things to work on.

"Obviously we would’ve loved to score early and we had a couple more chances throughout the half and even a couple in the second half. I think we need to do a better job of finding the back of the net, but at the end of the day this is a learning moment for us. This is only our second game as a team and there’s a lot to learn from this so we need to continue getting better going into the next game.”

Whereas Racing faced a five-day turnaround to its second game, the club has more than a week before returning to play within Lynn Family Stadium, where 5,300 fans turned out to watch the club’s debut game. For tickets, visit RacingLouFC.com/Challenge-Cup.