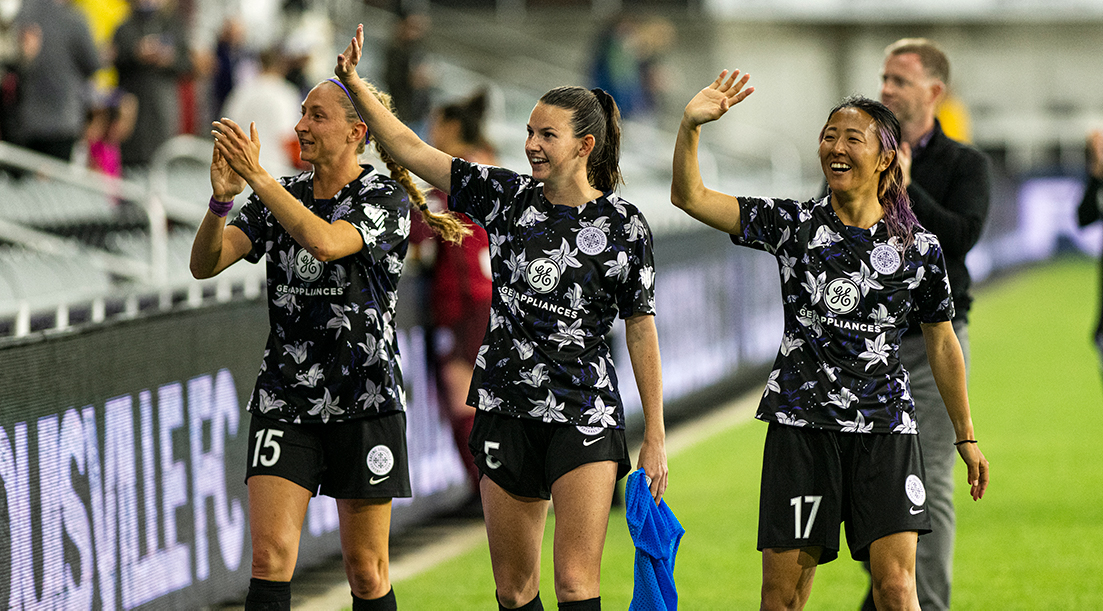 Not a bad opening act — for both Racing Louisville FC and for Lynn Family Stadium as a venue now in the world’s top women’s soccer league.

Saturday’s 2-2 draw between Racing and the Orlando Pride was a success, both on and off the field. The new squad, full of excitement but short on experience, held its own by coming from behind to earn a point in its inaugural NWSL game played as part of the Challenge Cup.

In the stands, 5,300 fans were in attendance — a new record for the young stadium — and they provided an atmospheric backdrop, cheering boisterously for their newfound heroes, with many coming from around the region to be part of Saturday’s spectacle and support the growth of women’s soccer.

From the opening whistle, the energy in the stadium was palpable. The crowd roared at nearly every touch of the ball. Not even a 30-minute deluge to close the first half seemed to dampen their spirits.

“The fans have been absolutely tremendous from the get go,” said Racing’s head coach, Christy Holly.

That early wave of emotion propelled Racing to a bright start, seeing multiple quality scoring chances just minutes into the action. Cece Kizer’s 12th-minute goal punctuated the stretch, throwing the thousands in the stands into a state of jubilation.

“The fans were very loud and rowdy,” Kizer said. “We definitely can feel that love and passion behind us.”

“The energy (the fans) brought to the players to score the first goal and seeing that, it’s a very special moment for just everybody involved,” Holly added.

Just as the scoring opened up, so did the sky. A few minutes after Kizer’s opener, the rain began to fall by the bucketful, sending fans to seek shelter in the concourse or under Lynn Family Stadium’s bourbon barrel-inspired roof.

Kenzie and Jeremy Carle were three rows from the top of section 116 in the Estopinal End. They had a bird’s eye view of Kizer’s goal, and a comfortable position under the stadium roof to keep them dry. Kenzie, 14, is a high school freshman who plays club soccer in Cincinnati. Jeremy, her dad, said they support Major League Soccer’s FC Cincinnati. They had no issue putting the civic rivalry aside to come to Louisville for Racing’s debut because women’s soccer is “more exciting,” Jeremy said.

Kenzie has ambitions to play soccer in college, and the Carles’ trip to Louisville was ahead of a Sunday game in nearby Lexington for Kenzie’s club. She was very impressed with Lynn Family Stadium’s ambiance and atmosphere, saying simply, “I just love it.”

The Carles’ decision to travel from a neighboring city to see Lynn Family Stadium was not unique. Racing’s debut was an attraction not just for Louisvillians, but for women’s soccer fans from all over the region.

Alex Rouse and Beth Mensing made the 115-mile trek down I-65 from Indianapolis for the game. Rouse wore an Ali Krieger U.S. national team jersey, and the pair were perfectly positioned from seats in section 226 to watch Krieger patrol the Pride’s right flank in the first half. Rouse recently moved to Indianapolis from Seattle, where she held season tickets to OL Reign.

“People from other Midwestern cities like us are willing to drive an hour for (NWSL games), so I think it could be a hub here (for NWSL fans),” Rouse said of Louisville.

“It’s a lot closer than driving to Chicago,” Mensing added.

Rouse noted that Lynn Family Stadium’s location in Butchertown was attractive to her, and the pair were excited to explore the neighborhood’s bars and restaurants on return trips to Louisville. During Rouse’s last year as a Reign season-ticket holder, the club moved from Seattle to neighboring Tacoma, more than 30 minutes from downtown Seattle, to play in a Triple-A baseball stadium, a stark contrast to Racing’s modern, soccer-specific home near downtown Louisville.

On the other side of the field, opposite Rouse and Mensing, 10 year-old Zoe Roberts and her mother, DeAnna, sat in section 203. They drove north on I-65 for nearly two hours from Bowling Green, Ky., to cheer for Racing, but also to see Orlando’s Marta, who Zoe said was her favorite player.

“Just to see female athletes, for her it’s such a good example,” DeAnna said of Zoe. “To be able to bring her up here (to Louisville) and see something she loves, and to see that women are doing this and it’s this caliber, I think it’s really important.”

The rain subsided in the second half, and after returning to their seats, the crowd was treated to some late drama.

Brooke Hendrix’s stoppage-time goal brought Racing level at 2-2 and sent the fans into another frenzy. Hendrix said that despite a long day of anticipation, she and her teammates quickly became comfortable playing in the excited atmosphere.

“It kind of took my breath away,” Hendrix said of the atmosphere in the stadium. “I was so excited and nervous all day, and then we got here and it actually felt like home from the first step we were on.”

With their debut out of the way, Racing can now settle into the rhythm of the season, with its eyes on the Challenge Cup before the regular campaign commences in mid-May. Kizer said that after the opener, the team is playing without pressure, and with something to prove.

“As an expansion team you know there's really no expectations or no pressure on us,” Kizer said. “I don't think anyone really expects anything from us, so I think we were just excited to get out and kind of prove what we can do.”

Racing proved Saturday that it will be a tough club to earn points from, especially at home, where a passionate fanbase will support them in the stands at Lynn Family Stadium.