Run down what we learned from the club's inaugural NWSL game. 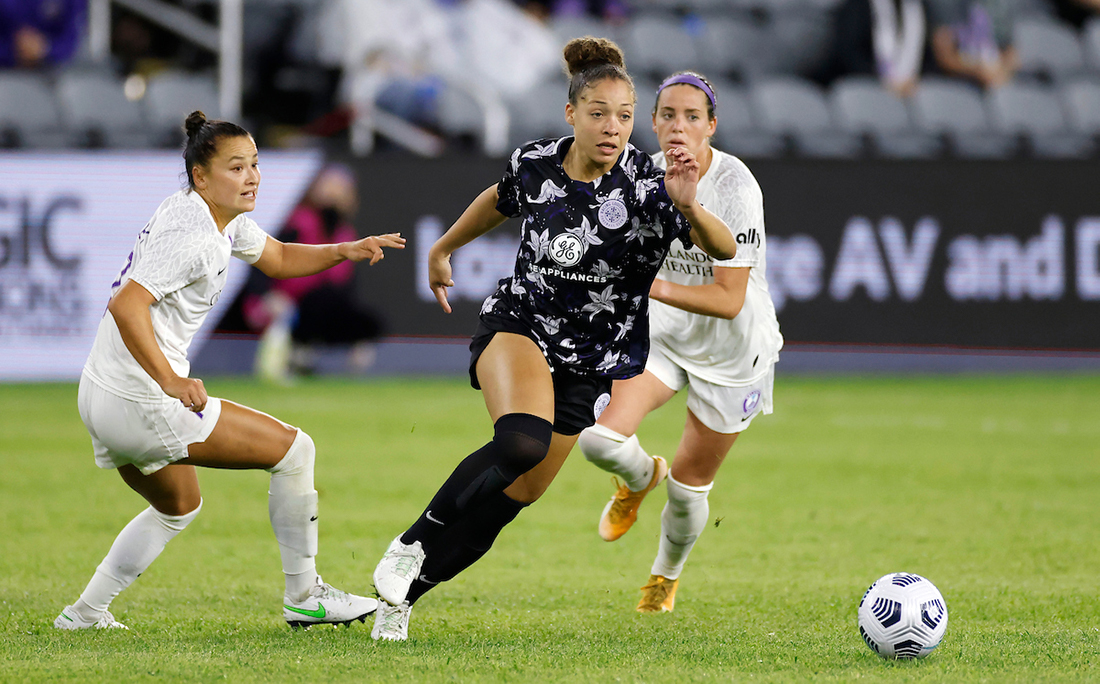 Saturday's inaugural Racing Louisville FC game played out much like the new NWSL club's first offseason with weird weather, some challenges and immense enthusiasm and spirit.

There was palpable nervous excitement — after months and months of anticipation and buildup, match day finally arrived. A deliberate team with a determined game plan scored early, conceded two tough goals to the Orlando Pride, then fought back late with Brooke Hendrix's equalizing goal that Racing fans will long discuss as an I-was-there moment.

And, of course, this all transpired through Louisville's Jekyll-and-Hyde weather that beguiled Racing's players throughout the preseason. A magnificent sunset beamed into Lynn Family Stadium while driving rain drenched fans and players alike.

Here are five other takeaways from Racing's 2-2 NWSL Challenge Cup draw against the Orlando Pride.

The game environment has genuine buzz

At dinner before the game, patrons discussed the match with servers and bartenders. (Yes, I eavesdropped.) Fans found their seats well before kickoff — bucking this city's tradition of late-arriving crowds. When Racing's starting lineup walked onto the field for the very first time, it felt like a moment.

With numerous attacking options in the mix for starting jobs, Louisville's own Emina Ekic earned a spot in Racing's debut XI. The playmaking youngster, who just finished her stellar college career at the University of Louisville after standout years at Manual High, showed why she was the fifth pick in the 2021 NWSL Draft. She took on defenders, slotted several key passes and helped out defensively, including a key tackle just before she was taken off at 75 minutes.

Ekic is a valuable thinker in Racing's makeup, a player with great awareness, passing vision and skill on the ball.

The preseason buzz about Savannah McCaskill and Yuki Nagasato made sense after watching them work Saturday night. They played their roles to a T, initiating numerous counters by unlocking their fellow attackers with a variety of passes. I suspect most NWSL opponents will play a higher defensive line against Racing thinking they'll be able to get forward with regularity, but after last night's counterattacking and pressing display from the home team, they'll do so at their own peril.

McCaskill sat deeper in the 4-3-3 setup than I anticipated, but her role as the most attacking-minded of Racing's three central midfielders allowed her to help defend and win balls while also getting forward and creating. She'll be a constant threat with her late runs into the box paired with a nose for goal.

Nagasato can cut inside from the flanks, act as a second striker or come deep and pick out passes. Her experience as a World Cup winner and longtime NWSL talent is invaluable to this group, and she looked comfortable in a free role. She almost notched Racing's first-ever goal, just missing on two great chances in the first half.

Injury-laden back line holds up

No manager wants to concede two goals, but Christy Holly has to be pleased by the effort from Racing's makeshift back line. With Addisyn Merrick sidelined with an injury, Racing didn't have one of its fastest players who has on-the-ball smarts and good experience as a right or center back in the league. In Merrick's place, Nealy Martin, who won a roster spot at the team's open tryouts, put on a strong performance.

Left back Emily Fox's excellent through ball led to CeCe Kizer's first-half goal, and Erin Simon did well on the right side.

Louisville loves athletes and teams with fighting spirit, and Racing showed great resolve with its late rally. Orlando's Abi Kim drilled in a stunning goal to give the Pride a 2-1 lead in the 87th minute, sucking the air out of Lynn Family Stadium. It very well could have ruined the debut, but Racing kept pushing.

Three minutes into added time, Hendrix thumped in the game-tying goal off a well-placed set piece nodded down in the box. That fight will go a long way in this challenging first season as a club.