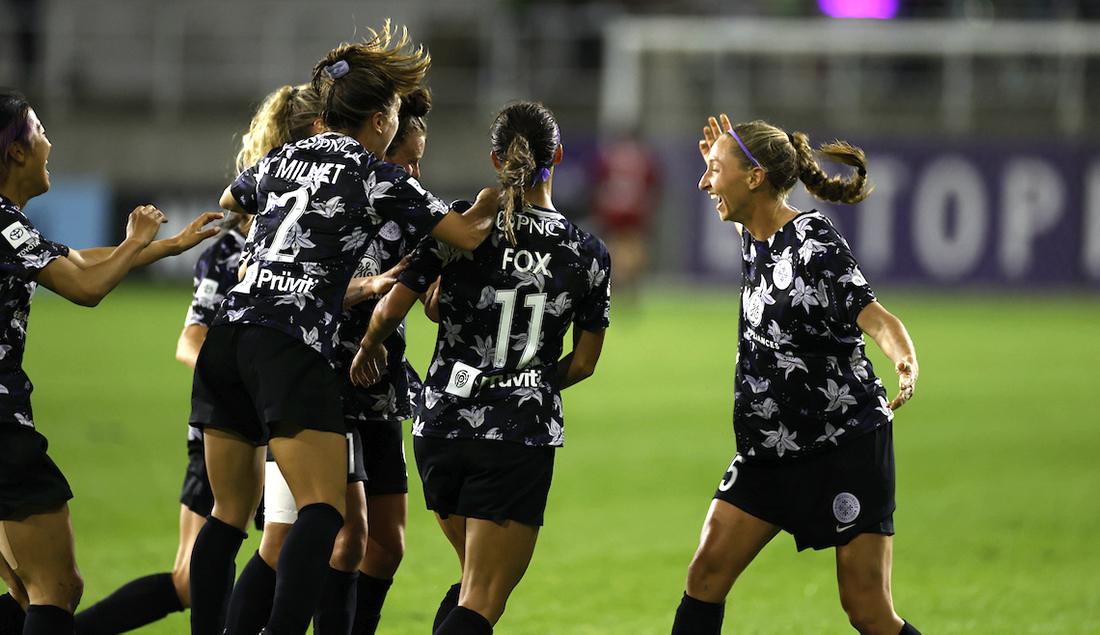 It looked, all in all, like a decent debut for an expansion team at the top of its sport. Racing Louisville FC had surrendered a lead but battled the visiting Orlando Pride to a one-goal deficit Saturday, a respectable score line for an exceptionally young squad.

Three minutes in, forward Savannah McCaskill played a long free kick into the box. Midfielder Freja Olofsson headed the ball to the ground before defender Brooke Hendrix cleaned up the chance for her first professional goal.

There was pandemonium within Lynn Family Stadium from there as the lights lowered, music boomed and a venue record 5,300 truly welcomed Racing into the world. The final score: 2-2 in both clubs’ opener to the NWSL's Challenge Cup tournament.

“It’s just everything coming together today,” said Racing’s head coach, Christy Holly. “We’re just delighted for the girls to be able to get out on the field, play in front of the crowd. Our fans have been fantastic. They’ve been patient as we build this program together. I’m definitely frustrated; I think there are many things we can do better.

“This was a thing where owners, management, players and fans deserved.”

Racing’s draw marked a positive result for a club that saw four of its 11 starters make their league debuts Saturday including Emina Ekic, the Louisville native selected fifth in the 2021 NWSL College Draft. The youngsters, however, took an early lead thanks to some of their more veteran leaders.

Forward Yuki Nagasato missed just wide left in the third minute when given a one-on-one look against the keeper, then had a point-blank try stopped by Orlando’s U.S. international goalkeeper, Ashlyn Harris, in the fifth minute. Racing keeper Michelle Betos also turned away Orlando’s best early look, a rocket off the foot of Sydney Leroux, before the host side saw its momentum create a goal.

Emily Fox — No. 1 overall in the NWSL Draft — played a through ball the defense and to Cece Kizer, whose smooth 12-minute finish made her the club’s first-ever scorer.

“Christy kept telling me just to make runs in behind and I’ll find the ball, and it just so happened to land in my feet,” Kizer said. "I took a touch and kept telling myself, ‘Don’t miss. Don’t miss. Just put it in the back of the net.’

“Not only was that the first goal in club history but also it was my first NWSL goal. It means a lot to me personally, and I know it means a lot to the club, so it’s just great to be a part of something like this.”

The Pride equalized on a Taylor Kornieck header before the half. And from there, the game appeared headed for a draw. But a wacky final few minutes ensued.

In the 88th, Racing had a headed shot on goal turned away at one end and conceded a brilliant goal at the other when Abi Kim — on her first touch — launched a shot off the top of the bar and in. Hendrix’s heroics followed.

“I saw it was 90 minutes and thought, ‘All right, I’m going for it. I’ve got nothing to lose,’” Hendrix said. “I sprinted up there and tried to get something on it. Freja got a head across and I saw the ball bouncing in front of me. Honestly, I just struck it and then I just blacked out. I was just running around, screaming, and yelling. I didn’t know what to do because I was so excited.”

Racing will get at least three more Challenge Cup games — the next one at 7 p.m. Thursday at the Washington Spirit, streaming on Paramount+ — to tune up for its inaugural regular season. Winners of East and West divisions will play for a trophy on May 8.

Woman of the Match : Cece Kizer