Preview: What to watch for with Racing vs. Orlando Pride 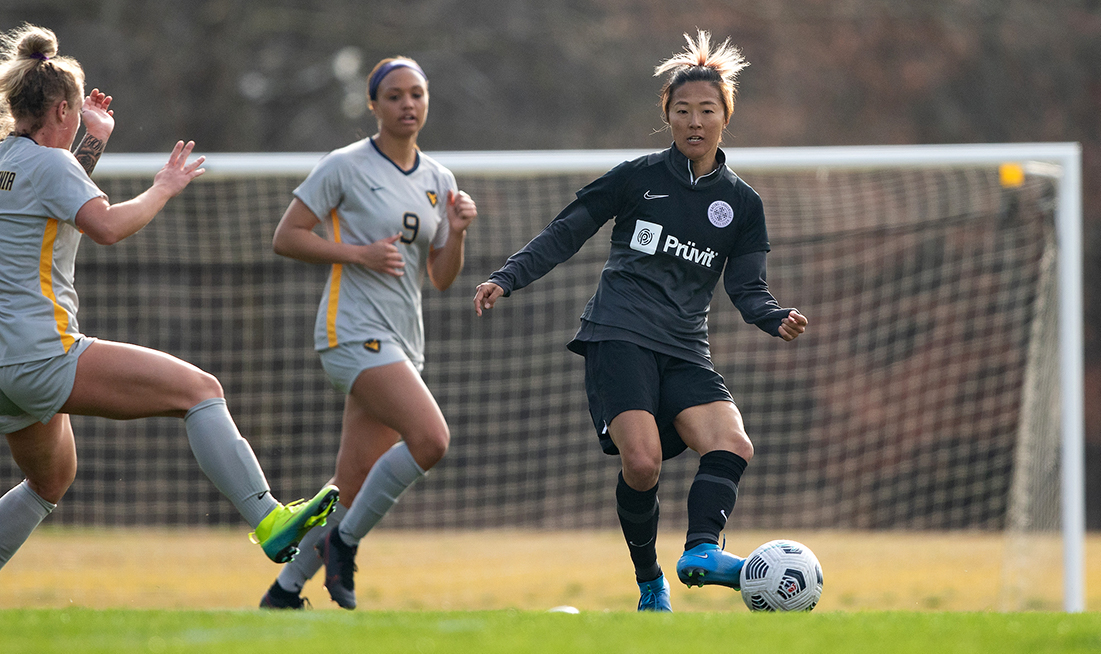 Some 536 days after the National Women’s Soccer League announced expansion to Louisville, Racing Louisville FC will make its debut Saturday, marking the return of top-tier professional sports to its city for the first time since the 1970s.

Since Oct. 22, 2019, Racing has last July unveiled its crest and colors, in August hired coach Christy Holly and through the fall, winter and now into spring built a roster to compete in the world’s best women’s soccer league.

It has been since 1976 that the American Basketball Association’s Kentucky Colonels ceased operations, leaving Louisville as a town known for the Kentucky Derby — an inspiration behind the Racing moniker — and its college sports.

Racing will bring a different sort of athlete to Louisville. That’s on its own roster, with forward Yuki Nagasato a World Cup winner for Japan and Emily Fox within the U.S. Women’s National Team player pool. But it also applies to opponents, as Orlando is expected to field national team defender Ali Krieger and goalkeeper Ashlyn Harris along with Marta, a Brazilian legend whose 17 career goals in World Cup play are the all-time record.

Here’s more of what to watch for Saturday…

"Ultimately, going into this game, the focus is on ourselves. We are focused on providing the fans a good demonstration of what we have been working towards and hopefully putting a strong foot forward from the very start.

Stream the match on Paramount+ and internationally on Twitch with play by play from Mike Watts and color commentary by Lori Lindsey.

The Challenge Cup: This tournament — first held last season when the NWSL returned to play amid the COVID-19 pandemic — gives Racing four games to tune up for the regular season starting mid-May. Orlando, the Washington Spirit, North Carolina Courage and Sky Blue FC make up the rest of the East Division, with the top points earner to play the winner of the West Division including the Chicago Red Stars, Houston Dash, Kansas City, OL Reign and Portland Thorns FC for a trophy.

Fans in the stands: While the NWSL staged games in 2020, they were all behind closed doors. Now the Challenge Cup is moving into local markets, setting the stage for a warm welcome for Racing in front of its home supporters at Lynn Family Stadium. Fans will continue to follow stadium operator ASM Global’s Venue Shield safety protocols, which make donning a mask/face covering mandatory at all times except when actively eating and drinking.

Oh, captain(s): Coach Christy Holly this week named goalkeeper Michelle Betos captain and forward Savannah McCaskill vice captain of Racing for the 2021 season. Betos, a senior leader in lavender, is a Queens, N.Y., native with more than a decade of professional experience across various leagues, most recently with the NWSL’s OL Reign. McCaskill, a younger pro, came to Racing via a trade with the Chicago Red Stars last fall.

International experience: McCaskill is one of a few Racing standouts to have represented her country at the senior national team level, boasting multiple U.S. Women’s National Team caps. Defender Emily Fox was in USWNT camp in January when selected by Racing at No. 1 overall in the 2021 NWSL Draft, while forward Yuki Nagasato owns the club’s most decorated international resume. With her native Japan, Nagasato won the 2011 World Cup and was runner-up in 2015.

Waiting in the wings: While Racing finalized a 22-player roster heading into the Challenge Cup, Holly actually has 21 players to choose from when selecting a squad. Forward Cheyna Matthews has signed with the club and will join training later this spring as she gets back in playing shape following the birth of her second child in December. Matthews in 2019 joined Jamaica for the World Cup months after having her first child.

Summing up preseason: Racing will play its first game against a professional rival Saturday after meeting four NCAA Division 1 opponents in preseason. The club defeated the University of Louisville, Vanderbilt University and West Virginia University before a pair of closed-door scrimmages with No. 1-ranked Florida State. In the open-door games, five players found the back of the net: Cece Kizer (4 goals), Katie McClure (2 goals), Lauren Milliet (2 goals), Jorian Baucom (1 goal) and Emina Ekic (1 goal).

Opposition Breakdown: Having missed the 2020 Challenge Cup due to COVID-19 complications, the Orlando Pride returned to go 0-2-2 during the Fall Series, scoring five goals and conceding eight. This season, Orlando is returning 15 players from that squad, seven of which started the Pride’s final match against the North Carolina Courage. This includes Krieger, Harris and Marta along with star forward Alex Morgan, who will miss Saturday’s game while on international duty with the U.S.

Managerial matchup: Racing coach Christy Holly has faced off against the Orlando Pride five times as a manager. During that those meetings, Holly posted a 2-2-1 record while leading Sky Blue FC. This will be the first time Holly goes up against current Pride coach Marc Skinner, who joined his club in 2019.

New to the league: While Racing Louisville may not have competed in last year’s Challenge Cup, the club has two trophy winners on its roster after defender Erin Simon and forward Cece Kizer both subbed on in the Houston Dash’s victorious effort. Half of Racing’s roster, however, is awaiting its NWSL debut. The list includes goalkeepers Katie Lund and Shelby Money; defenders Julia Ashley, Emily Fox and Nealy Martin; midfielders Noelle Higginson, Freja Olofsson and Taylor Otto; as well as forwards Jorian Baucom, Emina Ekic and Vanessa Kara.

Erin Simon is 4 appearances away from 60th professional appearance.

Savannah McCaskill is 2 goals away from her 10th goal in the NWSL across all competitions.