Holly, Simon get their sequel with Racing Louisville FC

The defender has reunited with a coach who originally chose her out of a tryout. 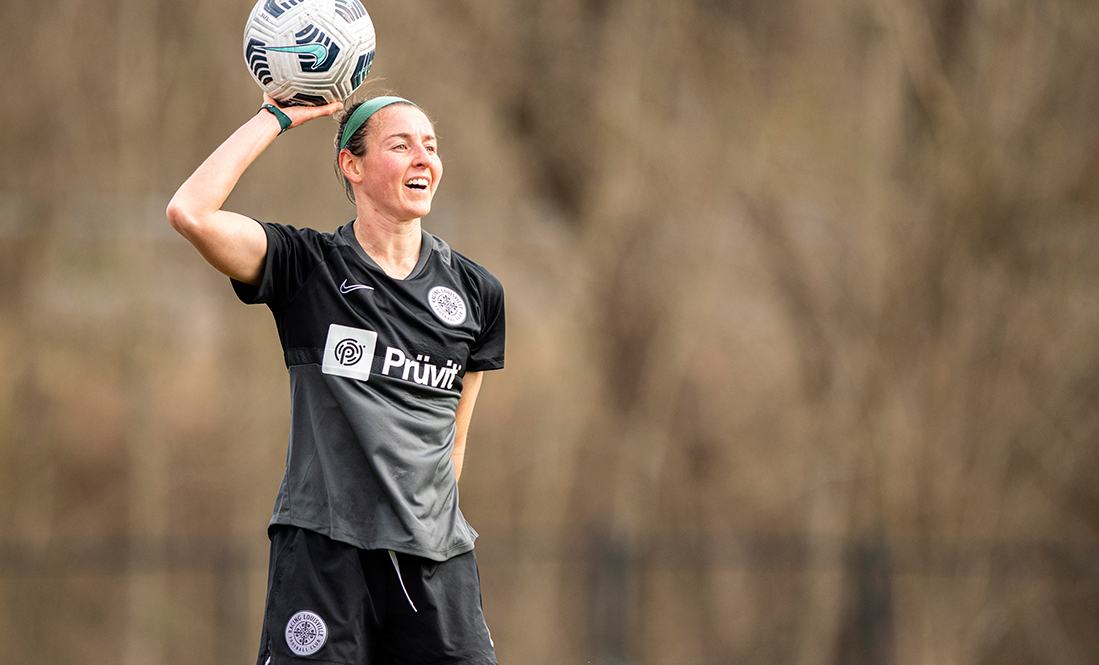 Erin Simon entered the 2016 NWSL College Draft but didn’t hear her name called, leaving the defender out of Syracuse University, who also scored 10 goals and registered 8 assists, with no professional deal.

That did not particularly dissuade Simon.

She attended a few clubs’ open tryouts, and among those inviting her to preseason camps was Sky Blue FC in her home state of New Jersey.

Simon stood out enough to earn a contract. As for the head coach offering it? Christy Holly.

Now leading Racing Louisville FC into its inaugural season, Holly also selected Simon in the 2020 NWSL Expansion Draft to be part of his new club.

“I was excited to play for Christy again because I think he is a great coach," she said. "He has a lot of incredible information to give. We had a bond over the years since leaving Sky Blue. We had kept in contact, so we have a pretty good coach-to-player relationship where we’ve spoken extensively about soccer.”

Simon, who went on to make 18 starts as a Sky Blue rookie, has also featured during her pro career with England’s West Ham United, with her stint there featuring an appearance in the 2019 FA Women’s Cup Final.

Simon eventually made the move back to the U.S., joining the Houston Dash for the 2020 season.

“I wanted to be closer to home and my family,” she said. “Also, I feel like my attributes as a player are better suited for the NWSL.”

One week after arriving in Houston, the COVID-19 pandemic sent the U.S. into lockdown. From her apartment, Simon had to find a way to build relationships with her new teammates.

“It was hard getting established into a team right when COVID hit,” she said. “You couldn’t form any chemistry. Then you had four weeks before the Challenge Cup to throw everything together. It was time crunching but a cool experience.”

Simon made five appearances during that Challenge Cup, which made pro women's soccer the first American sport to return to play amid the pandemic. The Dash also won the tournament.

Shortly after Simon returned from the event, her mother was diagnosed with breast cancer. She opted out of playing the NWSL’s Fall Series to spend time with family at home. In the process, she witnessed her mom’s tribulations.

“She has handled it with such grace and strength,” Simon said. “It has been inspirational to see her go through this. She has not complained once. She has not gotten down about being tossed this challenge in her life. And honestly, the most inspirational part for me was that she was still volunteering and looking out for other people’s interests.”

Simon is a bit closer to home now in Louisville — a potential drive away, not necessarily a flight — where she’s becoming part of a new family. The familiarity with Holly helps, but Simon says she’s also “excited to be part of a new city, being with all new kinds of players and different personalities.

“I am excited to establish our footprint in this city and to have the honor to play for the only top-tier professional team in Louisville. We have such an awesome fan base. I am so excited to be here.”

With the club’s preseason games concluded, Racing will next see outside competition in the second edition of the Challenge Cup, which for the expansion side kicks off at 7 p.m. April 10 against the Orlando Pride at Lynn Family Stadium. For more information, visit RacingLouFC.com/Challenge-Cup.