A defender with overseas experience is surrounded by familiar faces at her new club. 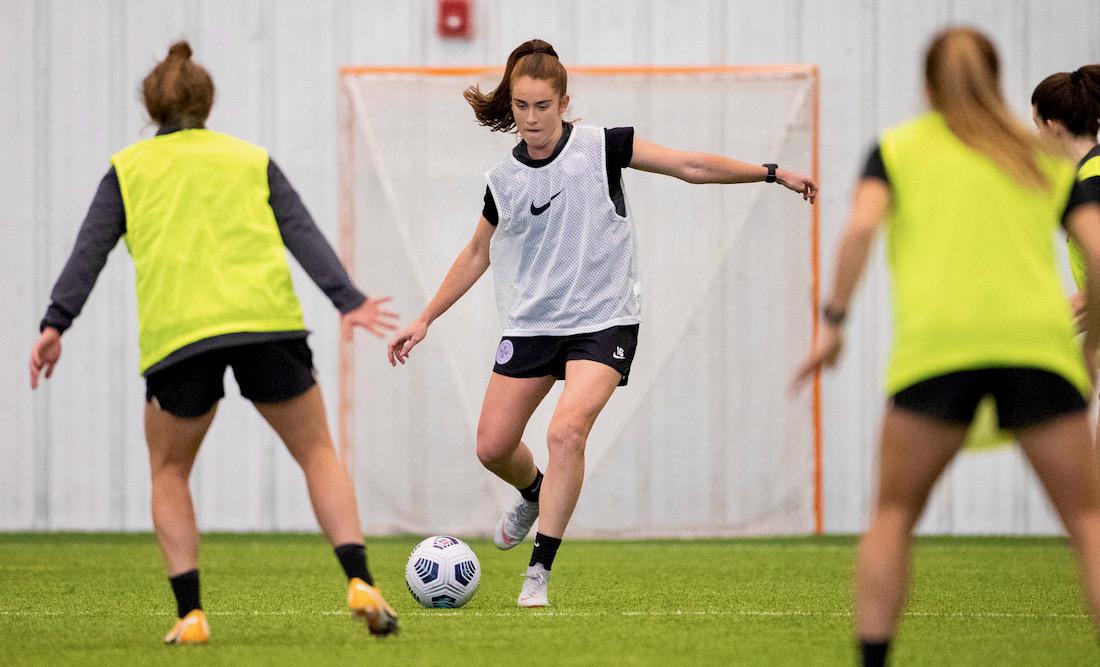 While only a third-year professional, Julia Ashley has already played around the globe with stints in Sweden and Australia preceding her selection by Racing Louisville FC in the 2020 NWSL Expansion Draft.

As the defender trains up to her American pro debut, she’s doing so in a comfortable place given Ashley's surrounded by familiar faces.

“When I went to Sweden, I knew no one. When I went to Australia, I knew one girl before I went,” Ashley said. "It is cool having people that you are already so close with and that you have that chemistry with on and off the field. I think that has helped.”

While home from college when attending the University of North Carolina, the New Jersey native Ashley used to hop in training with her local club, Sky Blue FC. Their coach at the time: Christy Holly, who drafted her to Louisville.

Then on the night of the 2021 NWSL Draft for college players, Ashley heard the names of two former Tar Heels teammates called. Emily Fox went No. 1 overall, and midfielder Taylor Otto followed at No. 11.

“I was getting so many texts that day,” Ashley said. “It’s like UNC West.”

Suddenly, Louisville felt like a fit despite its status as an expansion side.

Ashley had signed her first contract with Sweden’s Linköpings FC in 2019. There, she faced a language barrier to the point that a translator helped get her through film sessions. That also meant Ashley missed out on bonding moments with teammates.

“People were helpful," she said, "But I just wouldn’t know what was going on when people were chatting with each other in the locker room.”

In the fall of 2019, Ashley made a move to play for Adelaide United FC in Australia’s W-League.

“It was great being in Australia — such an awesome experience in a beautiful country,” she said. “I felt more at home in terms of being in America there. The majority of the team was Australian, but the style of play was similar to the U.S.”

“…I think my style of play is American. My stronger attributes are that I am athletic, and I think that going abroad, I was going to be challenged in a more tactical sense and technical.”

Last March, Ashley returned to the U.S. once her NWSL playing rights were transferred to OL Reign in Seattle. She was met with a new sort of setback.

Throughout her career, Ashley has dealt with injuries, including multiple knee surgeries. But a back ailment sidelined her through 2020.

“I was alone the whole time,” she said of dealing with it amid the COVID-19 pandemic. “It was so different from when you are with a team rehabbing. I just think that I knew that even if my progress was kind of slow, that I was going to come back. I saw slow progress and I just kept working toward it.”

Given her myriad experiences, Ashley, 24, is viewed as a young role model on the Racing Louisville roster.

“I have been injured for a lot of my professional career, but I want to be a leader on this team and be a positive influence,” she said. “I think as the weeks have gone on. I have been communicating more with them and everyone on the field and I hoping to build that leadership role more.”

Ashley and the rest of Racing Louisville will round out their preseason schedule March 24 and 28 with games at the college level’s No. 1 team, Florida State. The club’s NWSL era begins with the Challenge Cup, a preseason tournament Racing opens April 10 against the Orlando Pride at Lynn Family Stadium.