The former Houston Dash forward scored in both halves of the preseason opener. 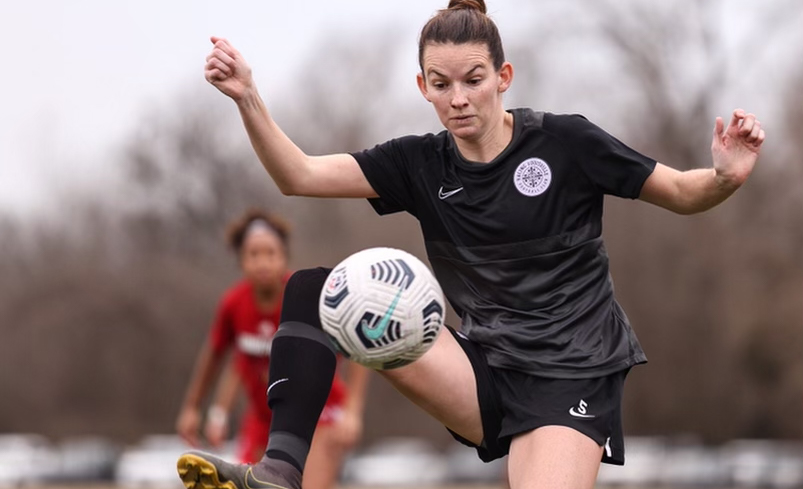 Cece Kizer netted a hat trick with goals in either half while leading Racing Louisville FC to a victory Saturday in its first-ever competition, a 4-0 preseason win over the University of Louisville.

Kizer, a forward out of Ole Miss, scored on service from the left side by Emily Fox (22nd minute) and Yuki Nagasato (24th minute) before getting on the good end of a 49th-minute free kick from just outside the box.

"I think I was just in the right place at the right time," Kizer said, "We've been getting our chemistry on the field. I'm just making my runs into the box, being on top of the ball and putting it in the back of the net.

"It was a little hectic at the beginning getting the jitters out, but I think we got composed and got a lot of possession. They sat in a lot, so it was hard for us to build. That challenged us to make connections in the final third and get opportunities."

Kizer’s trio of goals added to midfielder Lauren Milliet’s fifth-minute cleanup off a deflection in the Cardinals’ box, the first chance on goal in a game where Racing out-shot UofL by an 18-2 margin.

"It's a great thing, first and foremost, to get 90 minutes in," said Racing's head coach, Christy Holly. "We were able to push players for the most amount of minutes in a game so far.  So for us, it's a fantastic experience. It's really valuable, and there's a lot of moments within the game we're very happy with. There's obviously things we want to improve, but that's preseason."

Remaining Racing Louisville FC preseason games are scheduled against other NCAA Division 1 opponents on March 7 (at Vanderbilt), March 13 (versus West Virginia), March 24 (at Florida State) and March 28 (at Florida State).

The Challenge Cup begins April 9 before the regular season starts in mid-May.

UofL, meanwhile, played its first game since finishing 4-5 last fall. That also meant the Cardinals were finding their way without forward Emina Ekic, the Atlantic Coast Conference’s 2020 Offensive Player of the Year who was selected No. 5 overall by Racing in the 2021 NWSL Draft.

The Louisville native Ekic started against her alma mater to mark her first minutes at the professional level.

"It's fantastic to have the UofL team here," Holly said. "...That relationship is vitally important to us. We do wish that it was something we could open up more to the public, and in the future maybe it will be as (COVID-19) restrictions lift."

First up: @MillietLauren got us started in the fifth-minute. pic.twitter.com/jH29Y97WNq