The No. 1 NWSL Draft pick will be in action Saturday as preseason play begins. 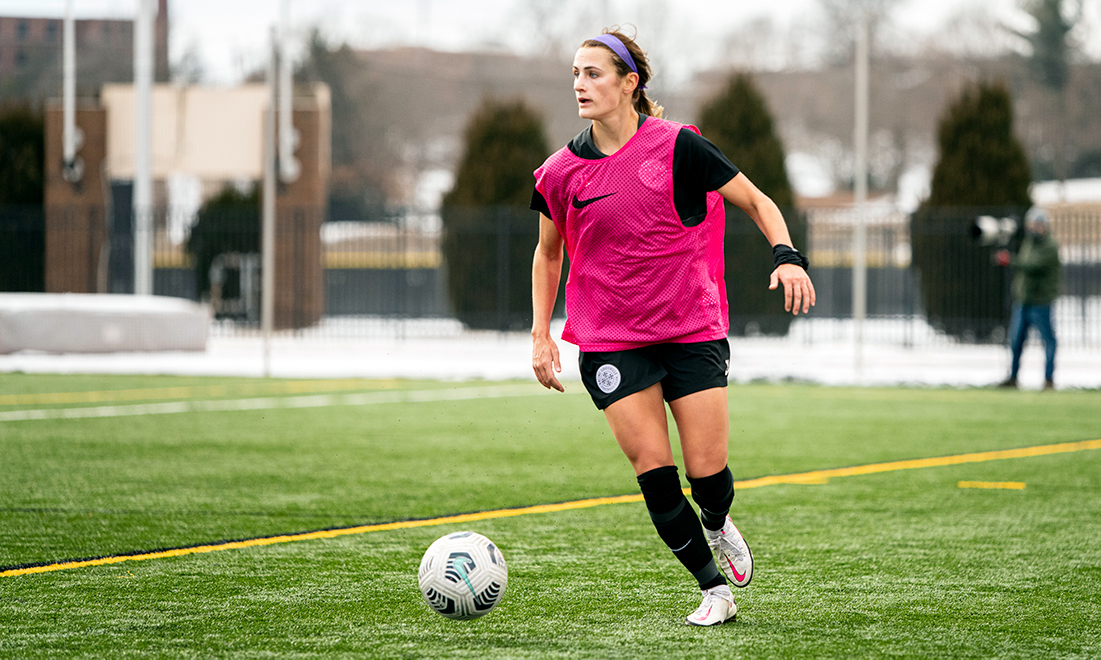 As the U.S. Women’s National Team went 3-0 during the recent SheBelieves Cup, Racing Louisville FC didn’t have a representative on the roster. But in the days leading up to the competition, defender Emily Fox mixed into sessions as a training player to help prepare the Americans.

Now, the No. 1 overall NWSL Draft pick is more than a week into her time on the pitch with Racing, a squad that skews young in both age and experience.

“There is no better team to come back from,” said head coach Christy Holly of Fox’s stint in red, white and blue. “The impact that has on the team from a quality standpoint is fantastic, but it also is energizing.”

An expansion club beginning NWSL play this spring, Racing will play its first competition Saturday when it hosts the University of Louisville in a preseason game.

So will continue a busy 2021 for Fox, a University of North Carolina product who heard her name called in the NWSL Draft while at USWNT camp preparing for January friendlies against Colombia. Days later, in a Jan. 22 victory, Fox subbed on for Ali Krieger in the 79th minute to earn her fourth senior team cap.

“The past few weeks have been crazy,” Fox said. “I feel like I have been traveling a lot all over the place. I am excited to be here and to get settled in and have this be my new home.”

When Fox arrived in Louisville, she was immediately introduced to the stadium, training facility and apartments. Her initial reaction to the resources: “Holy cow," she said. "This is awesome.”

Outside of soccer, Fox said her integration into the team has gone well, too.

“The girls, they all were super welcoming,” she said. “I have old teammates and some new teammates. It is nice to see everyone.”

As for those “old teammates,” Fox attended UNC with fellow draft pick Taylor Otto and expansion draft selection Julia Ashley. Additionally, she’s familiar with University of Louisville graduate Emina Ekic having played against her in the Atlantic Coast Conference.

Holly’s system of play is also a familiar one for Fox, whose teams won at the highest levels in college.

“It is similar to where I came from in terms of high press, going forward at pace,” Fox said. “But also, the new parts are a building phase and being composed.”

Fox started 69 collegiate matches, scoring two goals and notching 20 assists in addition to standout defending at outside back. During her junior season, she was a first-team All-ACC selection and a Hermann Trophy semifinalist. Through a senior season abbreviated due to the COVID-19 pandemic, Fox helped the Tar Heels advance to the ACC Tournament’s final and was recognized once again as a first-team All-ACC selection.

Also while in college, Fox returned to peak performance despite tearing her ACL twice.

“She is coming from UNC and they just produce players with a real strong, competitive mindset,” Holly said. “She has a huge amount of quality and drive about everything that she does. As someone who has overcome two ACLs, you have to be hungry to overcome that and put yourself back in the national team picture.”

In addition to the UofL friendly, Racing will face Vanderbilt (March 7), West Virginia (March 13) and Florida State (March 24/28) leading up to the NWSL’s competition calendar.