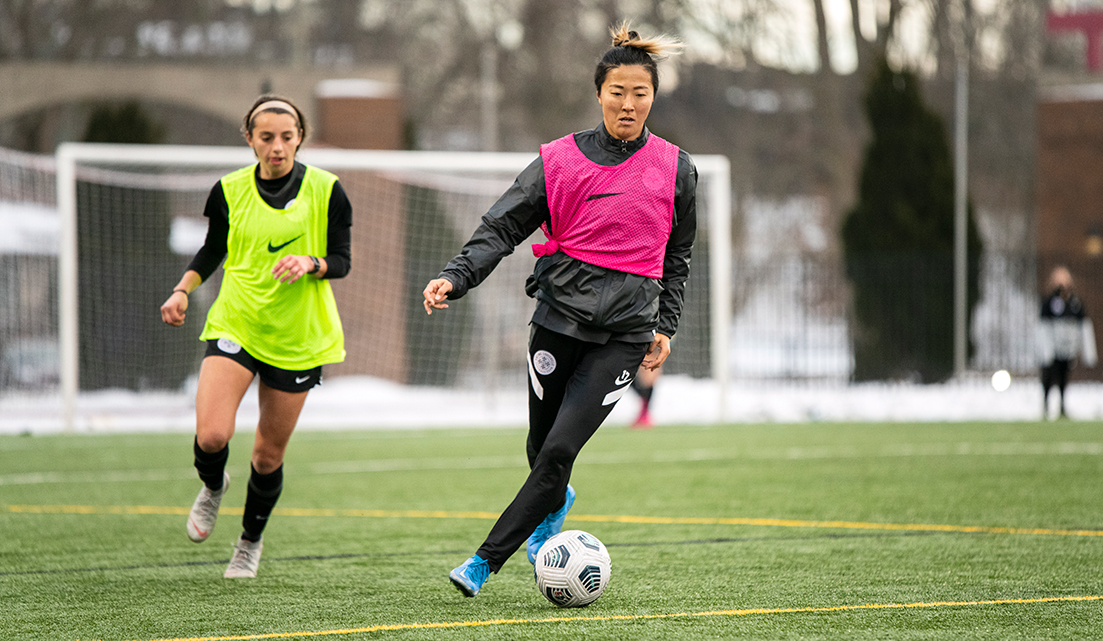 On Sunday, Racing Louisville FC got its first opportunity to play a full-sided intrasquad scrimmage thanks to a last-minute shift in location from its training facility to Bellarmine University’s Owsley B. Frazier Stadium — which had been cleared of snow.

One squad, wearing pink pinnies, consisted of nearly exclusively contracted players aside from former University of Florida standout Vanessa Kara, a non-roster camp invitee who played on the right wing.  This group defeated a team in yellow pinnies by a 2-0 score after an own goal courtesy of a slotted ball from Katie McClure and a long-range strike from Savannah McCaskill.

“It has been an interesting week, that is for sure,” Racing head coach Christy Holly said afterward.

Racing has dodged weather by training at indoor facilities in Lexington, Ky., and Indianapolis in recent days.

“I can’t ask for any more from this group of girls,” Holly said. “They have been tremendous from start to finish. As soon as we said where we are going to be, they have shown up and given 100 percent. Truthfully, I have learned more about the type of people we have on the team, which is exciting for us moving forward.”

Here’s what we learned from watching the scrimmage:

As more players arrive, the level of play rises

Racing’s squad is coming together. Forward Yuki Nagasato has more than a week of training under her belt after completing her required quarantine period. Defender Emily Fox is also working her way into the squad after a recent stint training with the United States Women’s National Team.

“Naturally when you add players like that, the quality of the team and the play just goes up,” said Holly. “Yuki is a phenomenal professional. She is a great role model for the younger players. I can see the influence that is having. Then you bring in Emily Fox who is just coming back from the national team, there is no better team to come back from.

Additionally, midfielder Freja Olofsson has arrived in Louisville from Sweden. She will join training once she completes her required quarantine period.

Partnerships are continuing to form

Quickly established relationships on the field will be key leading into April’s NWSL Challenge Cup for Racing. That’s whether it’s a center back pairing or chemistry working down the same side of the field

“I can see that those relationships are huge for us, and I think you can see probably in the first 15 minutes, there was a real disconnect. That is expected,” Holly said. “I think it is about learning what we can and cannot do — learning who can and who cannot do what. And ultimately that will impact our game plan as we go into the season.”

Absent any sort of a crowd in the closed environment, communication was easily heard. Fox, the left back, and Nagasato, who played on the wing, were among those getting their initial touches in Louisville.

This happened through the squad’s constant communication on the field. Throughout the scrimmage, the players for both teams were continually giving each other instructions.

“I think the most important thing is developing little communities on what side you are on,” Fox said. “Then figuring out what each person likes, whether that person needs a scream, or they need a little private, ‘Hey next time, look at me.’”

Mentality with and without the ball will be the difference

Throughout the scrimmage, Racing players provided insight into Holly’s approach. Offensively, when given the opportunity, they drubbed the ball at speed toward an opposing defender.

“For us, we want to get across the team that if you find yourself in an opportunity for a one-v-one situation, we back you,” Holly said.” “You have to back yourself and get after it and enjoy those situations. Some people get in those one-v-one situations and they don’t want to be there. They don’t have the confidence to do it.

“We have the utmost confidence in our players, and we encourage that as a way to separate ourselves in the game to create goal-scoring opportunities.”

Defensively, players were evident in how they reacted when losing the ball. At that point, they immediately applied pressure to prevent the opposition from mounting an attack.

“We want to be an absolute nuisance.” Holly said. “We don’t want people to enjoy playing against us. I am trying to build the team that if you are going to get something out of me, you are going to earn it. We want that among the team. Everything is competitive. Everything is imposing. That is what we are trying to carry on throughout the season.”

There is still room to grow, and that’s good

While there were a lot of positives to be gleaned from this initial scrimmage, it’s only going to provide Holly more insights into what his group needs to shore up in the coming weeks. He has purposefully assembled a young team hungry for opportunity at the NWSL level. Naturally, there will be growing pains.

“I think once we get into a more consistent schedule especially with the craziness with the weather,” Fox said, “I think those relationships will get stronger and we will get a better sense of each other.”

The Challenge Cup tournament begins as soon as April 9 before the NWSL’s regular season starts in mid-May. Season tickets are now on sale with more than 3,000 already claimed. To purchase your own, visit RacingLouFC.com/tickets or call (502) 568-2489 during regular business hours to reach our team.