The club has skipped town to Indianapolis, continuing training at a world-class facility. 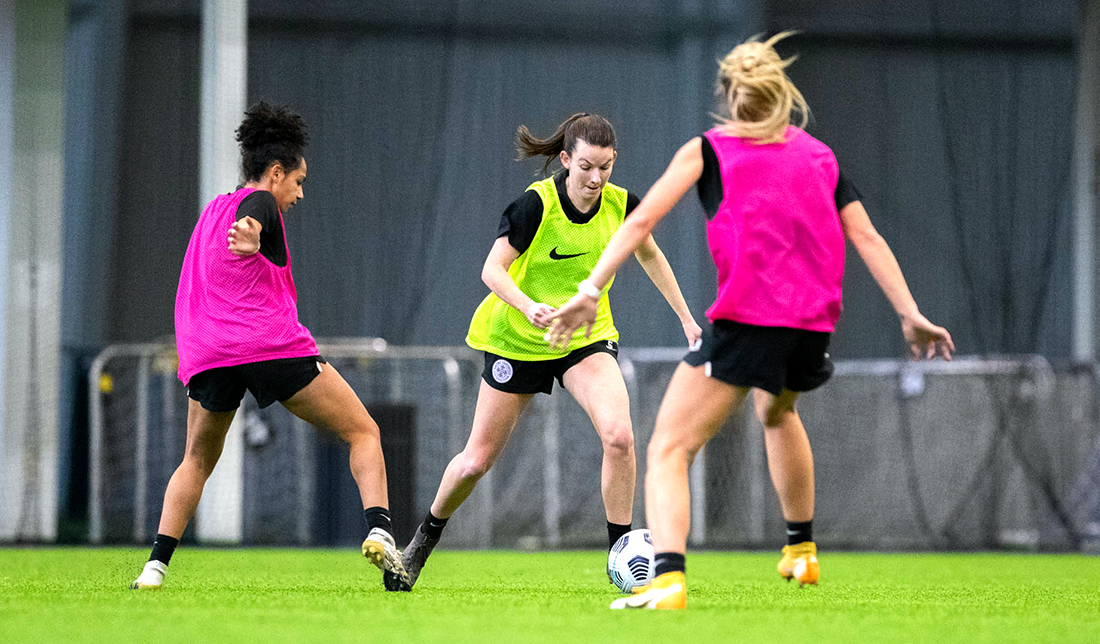 As most of the region hunkered down under a Winter Weather Warning on Monday night, Racing Louisville FC’s staff put the finishing touches on a plan to ensure its preseason continued.

Players and coaches — preparing for their NWSL debut in April’s Challenge Cup — traveled north the next morning to Westfield, Ind., arriving for a stay at the Grant Park Events Center. Home to preseason camp for another top-tier team, the NFL’s Indianapolis Colts, the grounds include a 300,000 square-foot indoor turf space with three full-sized soccer fields.

Racing Louisville is scheduled to train at Grand Park through Friday as its home base thaws out.

“It is so nice not to have to bundle up in like one thousand layers and try not to have our toes freeze to death,” said Brooke Hendrix, a defender from Sharpsburg, Ga. “It’s a really nice facility — great surface. I think we are going to get a lot accomplished in these short few days.”

Inside of two months from the NWSL Challenge Cup, players view this bit of adversity as valuable in building chemistry.

“We just want all of us to get into a groove and on the same page,” said CeCe Kizer, a forward from Overland Park, Kan.  “We are working a lot on our main principles right now because we are all new together. I think it is important to work defensively and offensively with the same standards. I think it is good to get in multiple trainings in a week because we haven’t been able to get into that rhythm yet of training”

Beyond that, Racing Louisville players are using this time to get to know one another off the pitch — at least as much as the COVID-19 pandemic will allow.

“At the apartments, you don’t always see everyone all the time even though we are living close,” Hendrix said. “I think this opportunity forces us to hang out with each other because we really don’t have anything else to do in the hotel. I think it is going to be good to get to know each other’s personalities off the field as well as on the field.”

On their way to Indianapolis, one van held a karaoke competition. Kizer described it as “just a good vibe.”

While out of town, team meetings will continue, too. There’s perhaps more time for impromptu bonding activities as well, with players mentioning rounds of Uno, Phase Ten and Bananagrams.

This is all in preparation for kickoff as soon as April 9. Following the Challenge Cup, Racing’s inaugural regular season will begin in mid-May.

The squad continues to build. Within the last week, forward Yuki Nagasato, a World Cup winner in 2011 with Japan, cleared quarantine and began training. The 2021  NWSL Draft's No. 1 pick, defender, Emily Fox, will hit the pitch with Racing for the first time on Thursday having recently attended U.S. Women's National Team camp.

Racing Louisville FC season ticket memberships are now on sale with more than 3,000 already claimed. To purchase your own, visit RacingLouFC.com/tickets or call (502) 568-2489 during regular business hours to reach our team.