A diverse panel will tackle issues at the recommendation of our diversity committee. 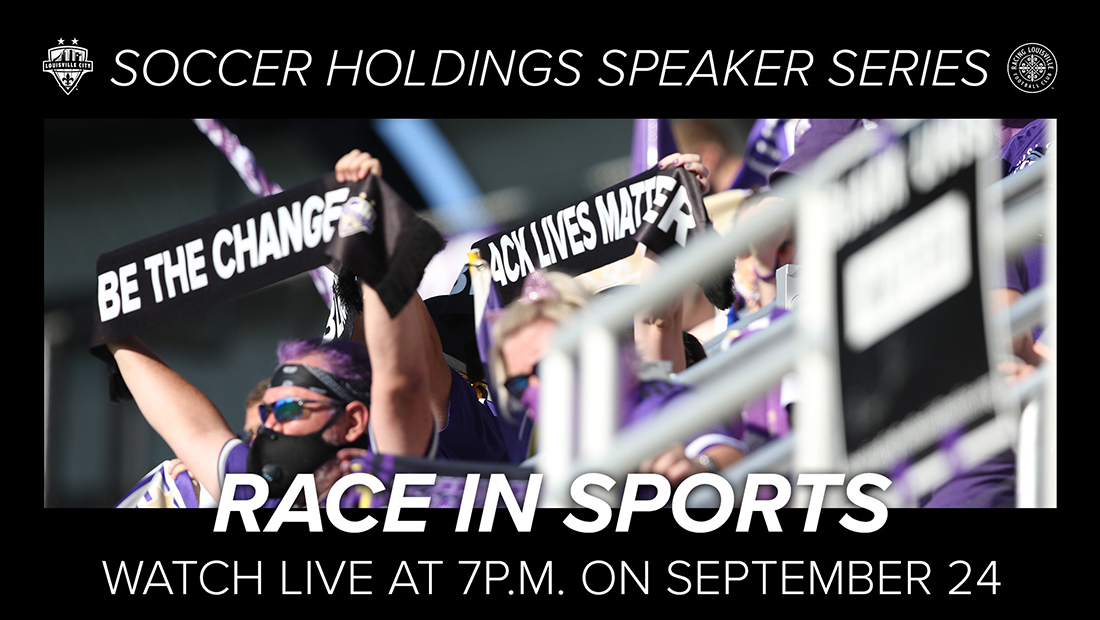 Soccer Holdings, LLC, parent company of Racing Louisville FC and Louisville City FC, will on Sept. 24 launch a speaker series at the recommendation of its Diversity, Opportunity and Inclusion Committee with an expert panel discussing “Race in Sports.”

This event will be the first in a year-long, monthly series of panel discussions on a variety of subjects that examine race relations in the Louisville and sporting communities.

“Race in Sports” will take place at Lynn Family Stadium and is open to Soccer Holdings employees, with audience size limited to encourage physical distancing. From 7-8:15 p.m., however, it will be broadcast live on both clubs’ websites and archived for viewing later.

“We’re educating ourselves and offering that same opportunity to our fan base," said Evan Floyd, Soccer Holdings’ Director of Community Engagement as well as secretary for the Diversity, Opportunity and Inclusion Committee. "There is no better way to learn than to get the experts in a room and listen to what they have to say.”

The “Race in Sports” panel includes decorated authors, educators and athletes from Louisville and around the country. Discussion will focus on the role of sports in social justice and offer educational insights into how athletics can be a force for good. Topics will consist of the desegregation of major sports leagues, the prevalence of athletes as social activists and how youth sports and fan communities can drive a change in mindsets.

Panelists will address questions submitted by the Diversity, Opportunity and Inclusion Committee along with topics suggested by the moderator before a question/answer segment to conclude the program. Attempts will be made to take questions from the online viewing audience.

The “Race in Sports” panel is made up of:

Dr. Shaun M. Anderson – Assistant Professor of Organizational Communication and Faculty Advisor for the Institute for Business Ethics and Sustainability at Loyola Marymount University. He is also the founder and President of CSR Global Consulting, LLC, which is a global consulting firm dedicated  to helping organizations develop strategic plans as a way to effectively communicate their corporate social responsibility efforts.

Professor Kenneth Shropshire - Adidas Distinguished Professor of Global Sport and CEO of Global Sport Institute at Arizona State University. He recently closed out a 30-year career as an endowed full professor at the Wharton School of the University of Pennsylvania, where he was also director of the Wharton Sports Business Initiative, professor of Africana Studies and academic director of Wharton’s sports-focused executive education programs. He now holds the title of Wharton Endowed Professor Emeritus.

Dr. Ricky Jones - Professor and Chair of the University of Louisville’s Department of Pan-African Studies. Jones was educated as an undergraduate at the United States Naval Academy and Morehouse College. He was only the second African American to receive a Ph.D. in Political Science from the University of Kentucky, where he specialized in Political Philosophy.  He is an author, radio host and contributor to the Louisville Courier Journal.

Monica Negron - As Assistant Director for Student-Athlete Leadership & Development at the University of Louisville, she is responsible for overseeing the CardsCARE Community Outreach Program for U of L Athletics in addition to serving as advisor for the Student-Athlete Advisory Committee (SAAC). Negron was a four-time All-Region, 2014 All-American, and 2014 Big East Defensive Lacrosse Player of the Year with her team winning the Big East Championship and making it to the NCAA Sweet 16. She later received her Master of Science in Sport Administration in 2016. She has recently been named to the Puerto Rico Senior Women’s National Team which will compete in the World Championships in 2021 in Towson, Md.

George Davis IV -  A midfielder for Louisville City FC, who co-founded the Diversity, Opportunity and Inclusion Committee and USL Black Players Alliance. After playing for the University of Kentucky’s men’s soccer team, Davis IV has had a distinguished ten year career in the United Soccer League, ranking among the all-time league leaders in games played, goals scored and wins. He has hoisted two USL Cups with LouCity and has been recognized as an All-League player on three occasions.