Goalkeepers have dominated, with remaining clubs all struggling to score. 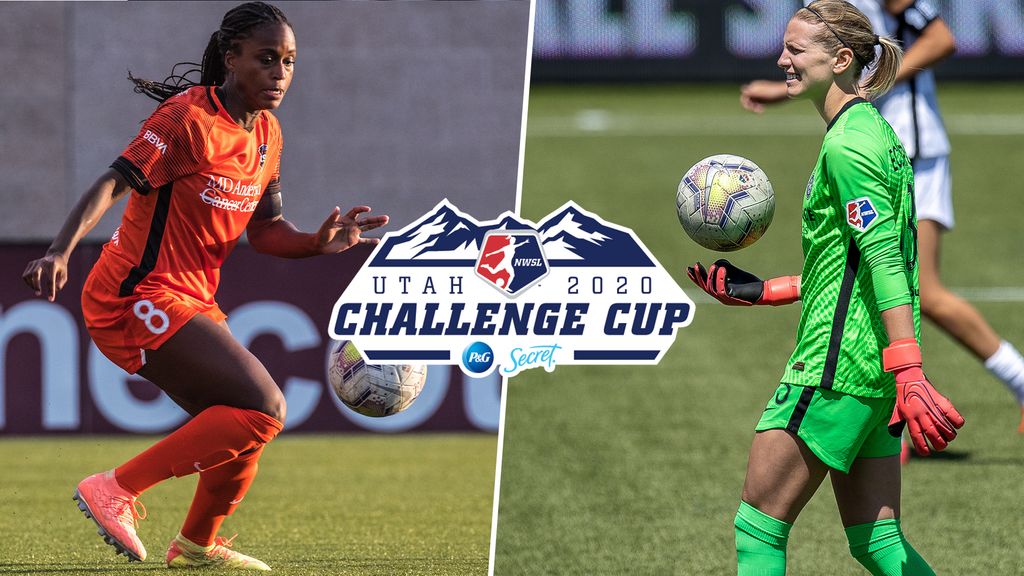 The NWSL Challenge Cup’s quarterfinal round wrapped up on Saturday night, setting up semifinal matches that kick off at 12:30 p.m. ET Wednesday with the Houston Dash versus  Portland Thorns FC. Then at 10 p.m., the Chicago Red Stars and Sky Blue FC meet.

A round of upsets

The No. 4 Houston Dash are the highest seed left in the eight-team tournament after the top three were all eliminated in the round of eight, including a shocking defeat by the North Carolina Courage, who entered knockout play unbeaten..

The Portland Thorns completed the upset against the Courage thanks to a late goal from rookie Morgan Weaver, sending home the reigning back-to-back NWSL champions. North Carolina had won four straight before the quarterfinals -- and played without a loss since last September -- while the Thorns hadn’t registered a victory so far in the Challenge Cup.

With a new coach and key players, Sky Blue FC was able to knock off the second seed Washington Spirit in penalties. Sky Blue came into this tournament as a question mark having made offseason moves that brought in big names as well as Freya Coombe to manage them.

Sky Blue appeared improved as as each game has passed, and they were able to knock off a very good Washington Spirit team.

The third upset came in the final match between the Chicago Red Stars and OL Reign. The Reign came into the match as the third Challenge Cup seed while the Red Stars were No. 6. By way of another penalty shootout, the Red Stars were able to knock off the Reign and move onto the semifinals.

With the top three seeds knocked out, the tournament is wide open with four teams left.

Keepers were the stars of the show in the quarterfinals. Only one goal was scored, with the other three games being decided on penalties. Per Challenge Cup rules, if a score is tied after the full 90 minutes, games go straight to PKs rather than extra time.

Britt Eckerstrom had what will likely go down as the best goalkeeping performance of the tournament in Portland’s win over North Carolina. Eckerstrom was called upon after Bella Bixby was ruled out with a partial ACL tear sustained in practice.

One of the greatest goalkeeping performances in league history. @Breck28 put in the WORK! We go again on Wednesday. #NWSLChallengeCup #BAONPX pic.twitter.com/Bhy1483oem

The Dash’s Jane Campbell did not have much to do during regulation, making just two saves, but she quickly became the hero in her club’s shootout by saving two penalties against the Royals.

Kailen Sheridan has been of high importance for Sky Blue throughout the Challenge Cup. She came up with seven saves before the shootout as well as a penalty save to help her side defeat Washington.

In the last match of the quarterfinal round, it was Alyssa Naeher who was the hero for the Chicago Red Stars against OL Reign. Naeher came up with six saves in regulation to keep the Red Stars in the match that was largely controlled by the Reign.

Where are the goals?

Out of the teams left standing, Houston’s five goals are the most of any club in as many game. Each of those scoring tallies came in the Dash’s first two matches; since then, they have been held scoreless. Houston will look to Shea Groom, Rachel Daly, Kristie Mewis and the rest of its attacking threats from here.

The Portland Thorns have scored three goals throughout the Challenge Cup but have largely struggled to pose an attacking threat. Entering semifinals the Thorns have only created 18 shots on goal from 45 attempts.

The Chicago Red Stars and Sky Blue FC both have found the back of the net just twice this tournament. The Red Stars are struggling to find the solution, with Chicago’s attack a question mark coming into the tournament addressed by bringing in players such as Kealia Watt and Rachel Hill. Chicago ranks last in the Challenge Cup in shots on goal with only 10 in five games. The Red Stars are still trying to find the right combination up front.

Sky Blue has also struggled to create shots on goal, registering just 11 so far. Both of Sky Blue’s goals in the tournament came in their game against the Houston Dash.

The semifinal matches as well as the final match will be played at Rio Tinto Stadium, home of the Utah Royals. The previous games were all played at Zions Bank Stadium, the home of the USL Championship side Real Monarchs.

With the switch in stadiums also comes the switch in playing surfaces. The field at Zions Bank is a turf field while the Rio Tinto is a grass field.

A decision was made not to have fans on site for the final two rounds, continuing to preserve the “bubble” NWSL players have surrounded themselves with this summer.